AA Edit | The lessons of Bengaluru

Bengaluru is not the only city that suffers when nature’s bounty, occasionally tending to such fury, manifests itself in intense rainfall 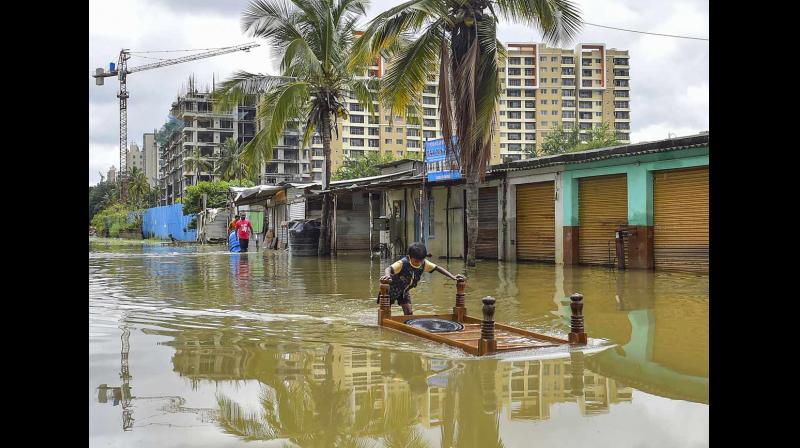 A boy pushes a table in a flooded locality of Bellandur after heavy monsoon rains, in Bengaluru, Wednesday, Sep. 7, 2022. (Photo: PTI)

The primary cause of the civic disaster that struck Bengaluru may have been the heaviest September rainfall on a single day last Sunday. But what lay hidden as Nature, the great equaliser, sent even the elite of India’s Silicon Valley scrambling for hotel rooms as their villas got flooded and their luxury cars became afloat like so many idling speedboats, was decades of poor governance, steep corruption and an unholy nexus between politicians and developers.

As India’s fastest growing city since the 1980s expanded unrecognisably beyond Bangalore, the old garden city once revered by retired pensioners, city planning rules and regulations were thrown to the winds to satiate the IT hub’s appetite for office towers and residences for techies. As the growing city took over lake, tank beds and their surroundings to be converted into a concrete jungle, channels through which rainwater used to drain into the lakes got choked.

No government or municipal corporation has been honest in dealing with the demands of a runaway metropolis where traffic flow is a daily nightmare, power supply likely to fail any time and garbage clearance at best a patchwork. Unbridled growth, coupled with poor civil engineering, contributed to the crisis that came to a head at a time of climate change rendering places prone to intense rainfall events in short spans of time.

Small mercy then that the old inner city fared better than the metropolis that encompassed semi-rural areas which were later linked by the Outer Ring Road. A waterlogged Greater Bengaluru is a warning for all big cities of India that don’t bother about monitoring city planning permissions and how builders bend them at will. Bengaluru is not the only city that suffers when nature’s bounty, occasionally tending to such fury, manifests itself in intense rainfall. Water bodies and waterways had long ago given way to the developer’s greed to startling effect. All of India's metropolises are grossly mismanaged.