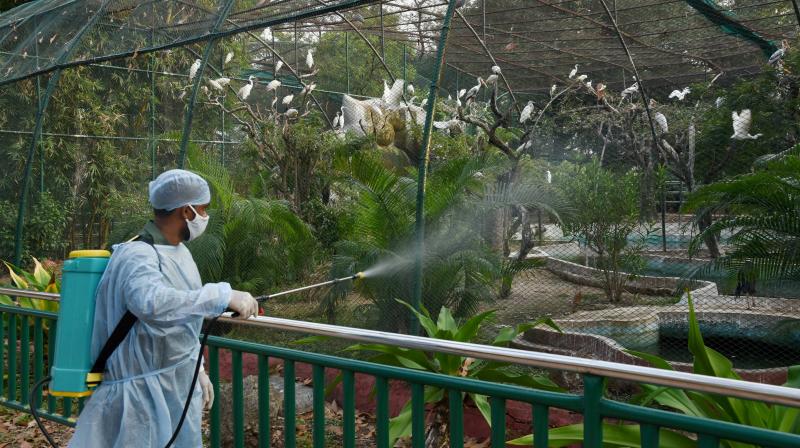 A worker sprays disinfectant at birds enclosure, as part of a preventive measure against Bird flu, at Nehru Zoological Park in Hyderabad, Thursday, Jan. 7, 2021. (PTI)

Most nations hit by pandemic Covid-19 are not in a position to face another health exigency but India has been called upon to pull up its socks against the avian flu which has till now killed thousands of migratory birds and poultry in four states and threatens to spread to more areas. The Union government has sent an alert to all states to monitor their avian stock especially in forest areas and in water bodies. As of now, 12 epicentres of the flu have been identified in four states — Rajasthan, Madhya Pradesh, Himachal Pradesh and Kerala.

It has been clarified that the flu this time is spread mainly through migratory birds that travel thousands of kilometres from the icy cold climes to their tropical destinations from October to February. The government’s attempt is to stop the secondary spread of the virus, and the state governments have already started addressing the issue. Thousands of infected ducks have already been culled in Kerala.

Economic activity on the ground has been halted for almost a year now, and a bird flu outbreak is a shock most poultry farmers would not be able to absorb, especially at a time when the markets have started slowly looking up. The government must work with the farmers to ensure that all the infected birds are properly dispensed with and that all the farmers who comply with the norms are compensated forthwith. The government must also think of extending financial help to encourage farmers to upscale their hygiene standards so that they do not fall prey to such outbreaks so easily. There must also be a mechanism to ensure that even the slightest of suspicions of the disease is scientifically addressed and acted upon without loss of time. All these measures call for close coordination among the state and central institutions and agencies. They could draw from the experience they have gathered while fighting Covid-19.