KCR, no stranger to taking risks and deploying disruptions to make quick, big gains, believes he must take the nation’s attention head-on 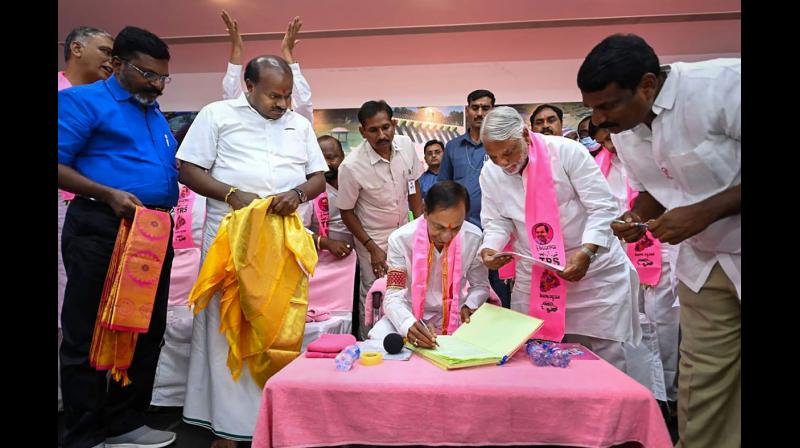 The Bharatiya Rashtra Samithi (BRS), the 2.0 version of the now defunct Telangana Rashtra Samithi (TRS), is a bold, powerful move by its chief and Telangana chief minister K. Chandrashekar Rao, who envisages a significant national role for his party’s new avatar.

It is a black swan event, with zero precedent of any regional party having overnight declared its intent to rechristen itself and go national in ambition and scope of politics. And some of the regional parties in India have been older and bigger than the TRS.

For example, the Telugu Desam Party was pan-Andhra Pradesh and represented all Telugu people, across Andhra, Rayalaseema and Telangana when they were one state for decades. Even after bifurcation, the TDP and ruling YSR Congress Party, relegated to an AP-only status, have greater size than TRS (Andhra Pradesh has 25 Lok Sabha seats while Telangana has only 17).

There is a ring of truth in Mr Chandrashekar Rao’s argument that there is a vacuum in India’s national politics, given the difference in electoral performance and perceived popular appeal of the two national rivals, the BJP and the Congress.

Of course, the TRS is not the only one which has identified this gap — the Arvind Kejriwal-led Aam Aadmi Party has actually started expanding, and rapidly, after winning the Assembly elections in Punjab — with two states under its belt, it is going to contest in Gujarat, Himachal Pradesh and several other states.

While they are addressing the same issue, there is a huge difference between the approaches of Mr Kejriwal and Mr Chandrashekar Rao.

Mr Rao, no stranger to taking huge risks and deploying big disruptions to make quick, big gains, believes he must take the nation’s attention head-on. The BRS is a start and has potential. Let us patiently wait and watch his next moves instead of rushing to a judgment about its fate.