The story began with the attack on the Air Force base in Pathankot, which is in Punjab but very close to J&K. 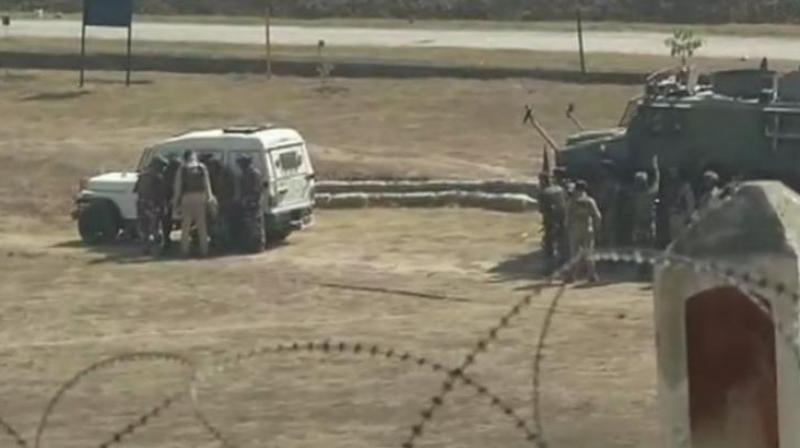 Jaish-e-Muhammad claimed the responsibility for carrying out attack at BSF camp at Humhama near the Srinagar Airport and Air Force Station and said that the members of its ‘Shaheed Afzal Guru squad’ did it. (Photo: ANI | Twitter)

The attack by a suspected Jaish-e-Muhammad fidayeen group from Pakistan on BSF’s well-fortified camp near the Srinagar airport last Tuesday eerily reminds us of several high-profile attacks by Pakistani irregulars on our security establishments in J&K in recent times.

The story began with the attack on the Air Force base in Pathankot, which is in Punjab but very close to J&K. Then followed a string of attacks at regular intervals — at the 16th Corps headquarters in Nagrota in Jammu, the attack on the brigade headquarters at Baramulla, and the strike at the military encampment in Uri in September last year, which brought forth the response of the so-called “surgical strike” from the Indian side. In addition, there have been regular hits at police stations.

The heartening feature of our response of late has been a far better coordination than before among various elements of the security grid — the Army, the BSF, the CRPF and the state police. The quality, training and efficiency of the police have improved by leaps and bounds. The personnel are local but this has not come in the way of their performance, which has been top grade.

Even so, it cannot escape notice that the major attacks on security camps have been similar in nature — the perimeter wire is snipped and terrorists wearing uniform of one or another arm of the security establishment sneak in. They are armed with grenade launchers and automatic weapons, and give evidence of a high level of tactical training as they dig in and fight for long hours. All of the above elements came together at the attack on the BSF camp in Srinagar. Fortunately, in the case of the Baramulla attack, an alert jawan stopped the progress of the terrorists before they could enter the camp.

The success of the infiltrators at regular intervals, and while using the same technique of entry, is surprising. What it comes down to is that the forces do not guard the periphery of their camps the way they should be doing. A leading security expert loosely spoke of the fatigue factor and the long hours of work that jawans are required to put in every single day.

Such an explanation does not seem good enough. Besides, the “surgical strike” was meant to have neutralised the ability of the enemy to hit at our security forces in J&K after crossing over into Indian territory. It is clear that nothing of the sort has happened and the much-hyped action of September 2016 will no longer merit even a footnote in the history of anti-terrorist operations, except as a high point of political exaggeration.

The anti-militancy operations are going on reasonably well for a few months. The positive impact of this should not be surrendered by allowing attacks on security camps to succeed.