As in every preceding summer, as the Himalayan snows melt, there is a resurgence in infiltration attempts across the Line of Control 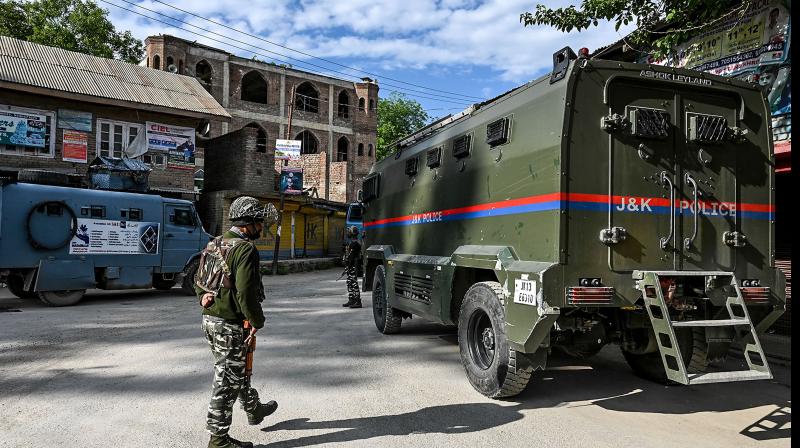 A security personnel patrols near the site of a gunbattle that occurred between security forces and a separatist group in Srinagar. AFP Photo

The tragic death of four Indian Army personnel, including a colonel and a major, and a sub-inspector of the J&K police in a terrorist encounter in Handwara, in J&K’s Kupwara district, late Saturday night highlights how while the rest of the country — and the world — is focused entirely on fighting the coronavirus pandemic, there seems little change on the ground in what used to be our northernmost state. As in every preceding summer, as the Himalayan snows melt, there is a resurgence in infiltration attempts across the Line of Control, and even the severe restrictions imposed in J&K following the scrapping of Article 370 do not seem to have stamped out militant attacks.

The terrorists are learnt to have taken civilians hostage at a house in the Changimulla area of Handwara, where they had come to receive a group of infiltrators from Pakistan-occupied Kashmir. Col. Ashutosh Sharma, commanding officer of 21 Rashtriya Rifles, led from the front in a successful operation to rescue the hostages and eliminate the terrorists, but regrettably he, along with Maj. Anuj Sood, Naik Rakesh Kumar, Lance Naik Dinesh Singh and sub-inspector Shakeel Qazi of the J&K police, had to lay down their lives. Col. Sharma was decorated twice for operations in Kashmir, and the nation will salute the bravery of all these martyrs. (His unit, 21 Rashtriya Rifles, has a stellar record, credited with 300-plus terrorist “kills”.)

The defence minister has said these deaths were “deeply disturbing and painful”, but the question we must ask is this: despite the severe restrictions J&K has been living under for the past nine months, since August 5, not to mention the nationwide lockdown since March 25, how is it that terrorists and their ilk seem to move around freely in Kashmir? In the first four months of 2020, 41 cordon-and search operations have been conducted, in which 24 security forces’ personnel and 14 civilians lost their lives, while 74 militants were killed.

Pakistan is unlikely to change its stripes anytime in the near future, so we must step up to ensure that its nefarious efforts go in vain.