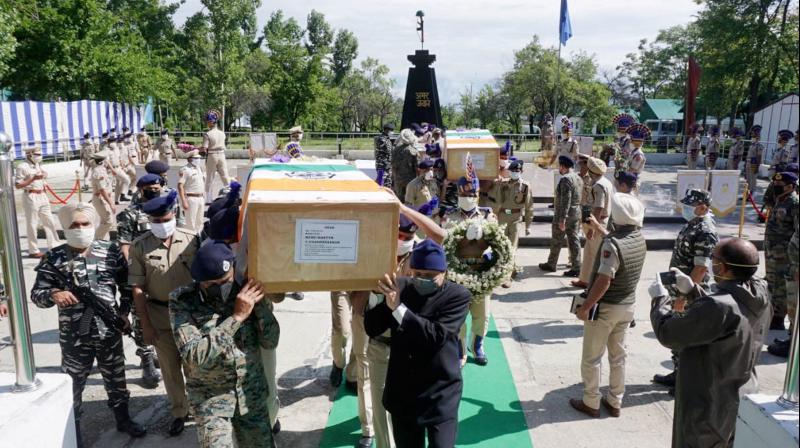 Senior officers carry the coffin of the slain CRPF Constable C Chandra Shekhar, who was killed in a militant attack in Kupwara district, during a wreath laying ceremony at Humhama on the outskirts of Srinagar. PTI Photo

First the killing by a group of terrorists — a mix of local as well as foreign elements — of an Army officer of such senior rank as a colonel, besides a major, two other Army personnel, and a policeman on counter-terrorism duty, near Handwara in North Kashmir last Saturday/Sunday, and then the mowing down of two CRPF jawans on law and order duty by terrorists — again in the broad Handwara area on Monday, ought to compel a re-evaluation of the security grid put in place since the constitutional autonomy of J&K was dismantled by the Modi government on August 5 last year.

If the Handwara killings impart urgency on account of the slaying of two officers, one of them the CO of 21 Rashtriya Rifles, the counter-terrorism force deployed in Kashmir, it has been evident for some time that the terrorism scene has hotted up in Kashmir well before the arrival of summer this year. In the first week of April, in the Keran sector near the LOC near Kupwara in North Kashmir, five Army commandos were killed in a hand-to-hand combat with a bunch of terrorists, who too were killed.

It is the regularity with which members of the security forces have been losing their lives in encounters, especially from the beginning of this year, that calls special attention to the security situation, which in the case of Kashmir is principally a derivative of the political situation in J&K. Pakistan-driven militancy tends to gain force when the rapport between the government and the people dissipates, as appears to be the case in recent times.

The gravity of the situation is evident from the fact that the security forces have had to work extra hard this winter, which is the time of year in which terrorists typically lie low on account of the forbidding cold and the snow-bound mountains at the LoC. According to one estimate, the forces have killed around 75 terrorists and lost 30-odd men. That’s a high ratio of loss on the government side, suggesting that the militants may have been well-entrenched.

Also, since the killing of the Hizbul Mijahiden commander Burhan Wani in July 2016, it is the southern part of the Kashmir valley that had become the principal arena of anti-terrorist action. It is here that ‘Operation All-Out’ played out. But in recent months, the northern part of the valley too has evidently become active. This appears to be a new element in the situation.

When the government abrogated Article 370 of the Constitution, stripped J&K of its statehood, separated Ladakh from it, and made J&K a centrally-governed territory as a UT, it proffered the laboured narrative that Kashmir’s special constitutional status conferred by Article 370 was the fundamental cause of the growth of a separatist sentiment in the valley. The striking down of this provision that had been duly ratified by the Constituent Assembly has clearly not offered the pathway to recovery in Kashmir, or extrication from the scourge of extremism and terrorism.

Dauntingly for the government, it is not just the predominantly Kashmir valley but also the predominantly Hindu Jammu region that has now begun to chafe at the abrogation of J&K’s special status and the consequent whittling of the political and economic privileges of the populace across J&K.

Tags: encounter in jammu and kashmir