While the Union government was busy arranging the aircraft and the petal shower, the nation was witnessing certain desperate scenes 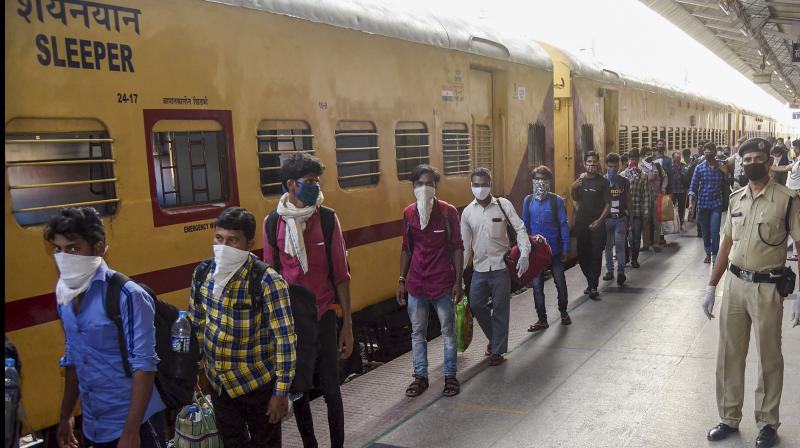 There were the penniless but luckier migrant workers in their thousands travelling on the Shramik special trains paying the normal ticket fair and an extra Rs 50 for the ride which will take them home. PTI Photo

India, fighting pandemic Covid-19, on Sunday witnessed the spectacle of aircraft of the Indian Air Force showering flower petals on institutions that are in the forefront of the corona fight. The mighty protectors of the nation’s skies, and the nation itself, saved some blushes as the event was held a day after Madhya Pradesh traffic police rescued 14 migrant labourers who were travelling from Mumbai to their villages in Uttar Pradesh in a concrete mixer. Otherwise, chances are that some of those petals would have fallen on the vehicle, which was stopped by the traffic cops when they noticed suspicious movements inside the mixing vessel fitted on the vehicle. One can imagine the desperation those Indian citizens would have experienced before getting into the hot oven that the mixer was! The two incidents, to some, extent reflect what is happening in the skies and on the ground in India when it comes to efforts aimed at containing the deadly virus.

The NDA dispensation, which has by now proved beyond doubt its skills in plucking the low-hanging fruit, has been arranging such spectacles, which are runaway successes, no matter how they broke the social distancing norms the government had instituted. The earlier editions of the show included clapping of hands in honour of the health workers at a time when they were nowhere near the victory stand and lighting of the lamps in solidarity with corona warriors. How one wishes the Armed Forces were directed to go beyond gestures and aid the real life heroes on the ground, maybe by setting up hospitals or joining the health workers or taking migrant workers home or distributing food to the stranded on the streets.

While the Union government was busy arranging the aircraft and the petal shower, the nation was witnessing certain desperate scenes. There were the penniless but luckier migrant workers in their thousands travelling on the Shramik special trains paying the normal ticket fair and an extra Rs 50 for the ride which will take them home. There were the reports, which said more than 300 people have died of hunger, exhaustion or financial bankruptcy due to lockdown; no aid the government announced had reached them. There were the health workers across the country being forced to make do with the available PPE kits. There were the states, which are spearheading nation’s offence against the virus, scrabbling at the bottom of their purses to see if they can survive another day.

There are lakhs of Indians languishing in other nations, mostly in the Gulf Coordination Council states, unwanted by their own motherland. Their pleas for special flights or at least medical teams have not landed on sympathetic ears. These ground realities seem to have no effect on the government, which loses no time in taking credit for the achievements, whatever they are. A spectacle is part of celebrations, which Indians don’t mind even when their wants are not met. But not when the virus with a killer instinct is knocking on their doors.