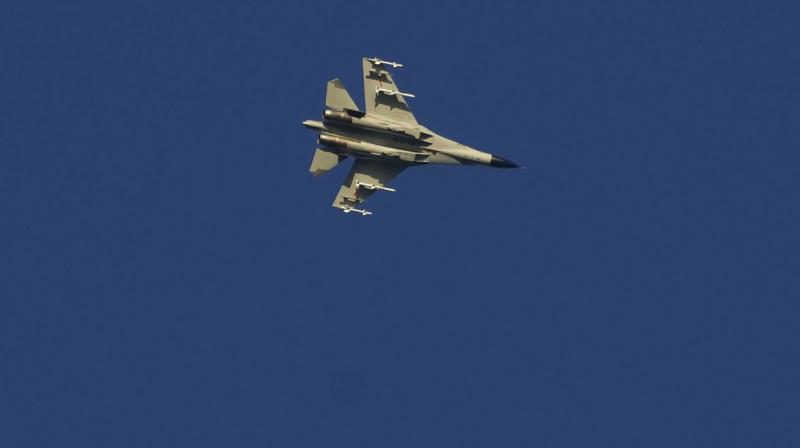 A military fighter jet flies above the Taiwan Strait as seen from the 68-nautical-mile scenic spot, the closest point in mainland China to the island of Taiwan. (Photo: AP)

In a massive show of its disapproval of US House of Representatives Speaker Nancy Pelosi visiting Taiwan, China has been flexing its military muscle for over two days with missile launches and military movement that could potentially blockade the island nation while also flying scores of fighter aircraft freely into its airspace.  As China’s moves are globally being viewed with apprehension, what Ms Pelosi has achieved in a largely symbolic gesture of solidarity with a fellow democracy with her visit appears relatively hollow.

Doubts also arise over whether American deterrence has been strong enough in the face of threats that its allies Taiwan and Japan are facing. It may have been of greater help to Taiwan if the US had been ramping up its defence in the air and over water as reassurance of assistance in the face of a Chinese invasion that the Taiwanese dread.

The missiles that China launched in the general direction of their neighbouring island nation landed not only somewhere in the vicinity of Taiwan but five of them also landed in waters that Japan claims as its exclusive economic zone. The crossing of a line farther away from China and Taiwan exposed the dangerous nature of the games that superpowers play. The rest of the world could only look on as spectators and hope that none of the players in this tussle lose their mind and light up a conflagration that none can afford.

Not for a moment can it be believed that China did not know that five of its missiles were landing closer to Japan which Ms Pelosi was visiting in the course of her explosive Asian tour. Given its claims of precision landing of its firepower in ballistic armaments, China must have been well aware of how far this provocation was intended to go.

If the Chinese President, Xi Jinping, has not crossed the Rubicon in starting any exercise to take token territory of the self-governing island of Taiwan that China claims, it is because he may be biding his time while awaiting his coronation ahead of an unprecedented third term. The world knows he sees unifying Taiwan with China as the primary goal of his career.

Xi Jinping is a long-term player in geopolitics over Taiwan whereas the term of Ms Pelosi, who played to her domestic constituency and audience in her visit defying Pentagon advice and President Joe Biden’s wishes, could be over very soon if the Democrats were to lose their House majority in this winter’s mid-term polls. She is answerable for projecting her anti-China stance in her defiant visit at the expense of unbalancing ties at a time fraught with tensions for the world.

In reactions observed on its heavily vetted social media, some of the people seemed to be mocking China’s reaction as not strong enough. But that would hardly make a dent in what their leader may have in his plans for Taiwan. The American view that China should not use the Pelosi visit as a pretext for war or escalation is not realistic. Stationing the USS Reagan in the region appears to be a weak US response given the stringer signalling level of Chinese actions.

The breakdown of diplomacy with US Secretary of State Antony Blinken and Chinese foreign minister Wang Yi hardly glancing at each other at the Asean meeting in Cambodia illustrates the current state of relations between the superpowers. The reiteration that the US’s “One-China” policy has not changed is like a straw in the wind in the circumstances. The question is what Ms Pelosi has achieved in stirring a pot that was already simmering.