None of the reasons for ending J&K’s constitutional status has proved valid. Terrorism is on the rise, the economy is devastated 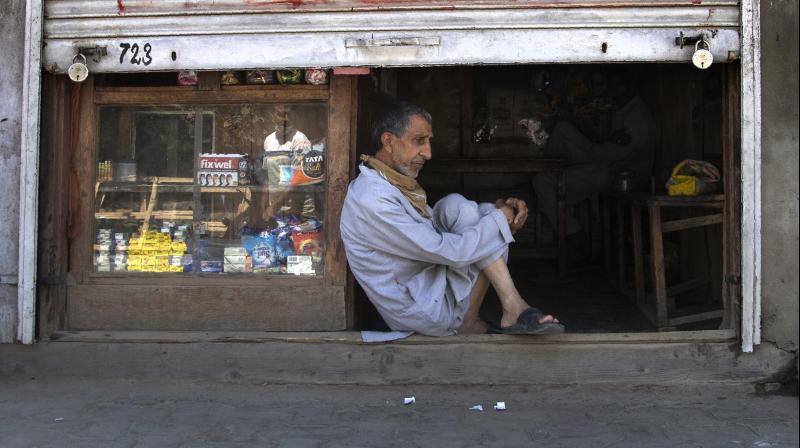 A Kashmiri shopkeeper sits at the entrance of his half closed shop during lockdown in Srinagar. AFP Photo

It is exactly one year this day that the Centre ended the special constitutional status of Jammu and Kashmir, and created two Union Territories in place of the former state.

This meant that New Delhi thought that the people of the state could not be trusted, and that their dignified existence within a democratic India spelt danger to India.

The corollary of this perverse understanding was that people had to be brought to heel. In no other state of the Union have citizens been quelled before and subjected to an existence that rivals the worst practices of single-party or military dictatorships.

To suppress the living norms of the people, in J&K, around 40,000 additional soldiers were brought in to supplement the half a million already present; nearly 7,000 people, including nine-year old children, were placed in detention; even second and third-tier politicians were thrown into jail (other thanthose  of BJP); representative government ended; all phones and the Internet were shut; Section 144 CrPC was imposed across Kashmir valley for months together; even doctors reporting to hospitals for duty were thrashed at barriers by police and security; educational institutions shut shop; newspapers were forced to carry only government briefings (propaganda), the writing of editorial opinion ceased and was replaced by tracts on gardening, philosophy and morality; journalists had to report to police stations and a coordination mechanism established between the information department and security department; industry and business collapsed; unemployment soared.

All this went on for eight months before the corona virus-related lockdown.

Thus, Kashmir has been locked down for one whole year now.
J&K has been through a secessionist movement, it has seen terrorist violence.

Still, in the past 70 years, no government at the Centre has taken the step that the Modi government has.

This is fundamentally because they had no doubt that, at its core, the Muslim-majority Kashmir valley was dominated by a firm middle ground in spite of the so-called lures of extremism promoted by a neighboring country.

It is this which led Atal Behari Vajpayee, a former PM from the BJP party, to declare  that he would interact with the people of the Valley on the basis of “insaniyat, jambhuriyat, and Kashmiriyat” (humanity, democracy, and the Kashmiri ethos).

In contrast, the present regime appears to believe that in the country’s only Muslim-majority state, although at the time of Partition it had refused to join Pakistan, the entire populace is untrustworthy.

The terms on which Kashmir’s Hindu Maharaja had acceded to India were enshrined as Article 370 of the Constitution by the Constituent Assembly itself.

It was akin to a treaty that formed part of the building block of the Union of India, but the Modi government dismantled it in legally questionable ways. Today the middle ground in Kashmir is gone.

None of the reasons for ending J&K’s constitutional status has proved valid. Terrorism is on the rise, the economy is devastated.

We are in a dangerously uncertain situation with China now openly colluding with Pakistan on Kashmir, border trouble erupting in Ladakh, and the people of the valley being in a disturbed state.