Politicians of the day, too, cannot ignore the popular perception that learning Hindi in school does not help much 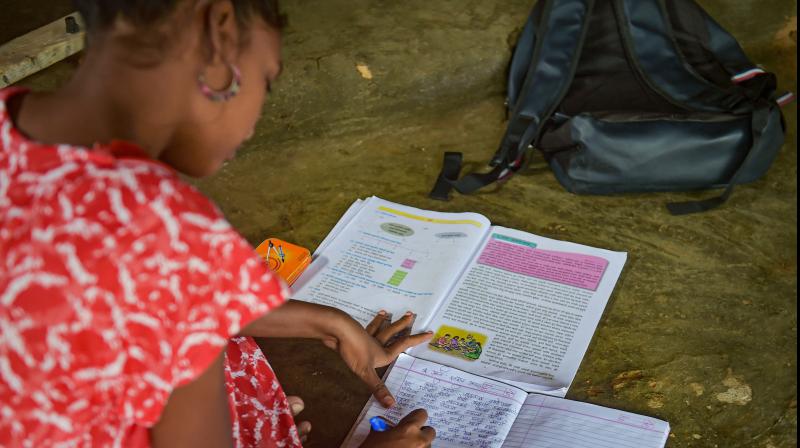 Jyoti Randhe, a class 10th student of BMC school, studies at her house, at Aarey Colony in Mumbai. AFP Photo

The hullabaloo over the new National Education Policy (NEP) in Tamil Nadu could be intriguing to many.

Particularly when every political party jumps into the fray to discuss educational reform or when chief minister Edappadi K. Palaniswami categorically says that he cannot allow the proposed teaching of three languages in schools in the state, defying his electoral ally, the BJP.

For a clear understanding, one needs to remember that language and education are intertwined with politics in Tamil Nadu, always.

The state’s unique two-language policy, stipulating the teaching of English and Tamil alone in schools, was affirmed through an Assembly resolution on January 23, 1968, by the first DMK chief minister C.N. Annadurai and reaffirmed on November 13, 1986, when M.G. Ramachandran was at the helm.

In fact, every education policy — collectively they enabled the state to already achieve a gross enrolment ratio of 49.3 per cent in higher education — has been shaped by politics.

Many a custom that prevented subaltern communities from pursuing higher education was removed through government orders and moves to deny opportunities for the marginalised people were fought through political action.

That a proposal by C. Rajagopalachari in 1953 to introduce a “hereditary education policy” cost him his premiership and his successor K. Kamaraj earned the sobriquet “Father of Education (Kalvi Thanthai)” for opening more schools is an example of people’s awareness on education and their expectations from political leaders.

Earlier, Rajagopalchari had lost his premiership when he tried to introduce Hindi in secondary schools in 1937, triggering the first anti-Hindi agitation in the state.

So politicians of the day, too, cannot ignore the popular perception that learning Hindi in school does not help much. Also people wonder what’s so great about the NEP that only aspires to achieve a GER of 50 per cent in 2035 when Tamil Nadu is just short of 0.7 per cent now.