The police have filed over 80 chargesheets pertaining to the riots 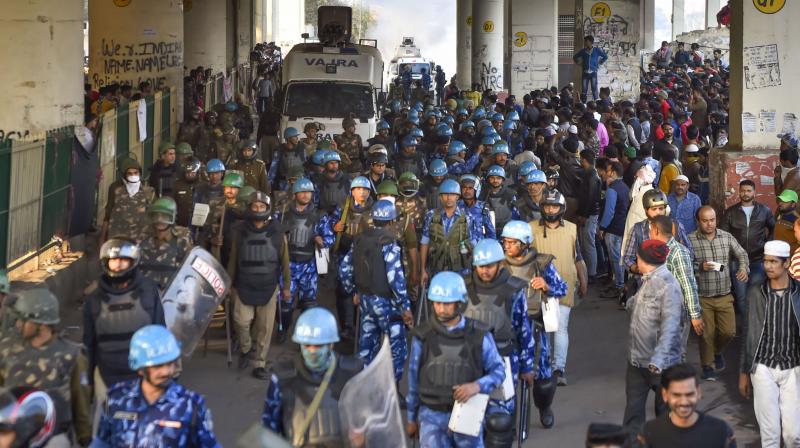 The riots had claimed 53 lives, of whom 38 were Muslim. But the police have been widely accused of ignoring complaints against Hindu attackers, inflating charges against Muslims. PTI Photo

A huge question mark hangs on the authenticity of the Delhi police's investigation into the February 2020 riots in the national capital. Clear discrepancies, glaring errors and now, a likely fraud, have come to light with respect to it, plunging it deeper into a credibility crisis.

The police have filed over 80 chargesheets pertaining to the riots. They all build up a certain narrative — of one community targeting the other, and paying for it.

The riots had claimed 53 lives, of whom 38 were Muslim. But the police have been widely accused of ignoring complaints against Hindu attackers, inflating charges against Muslims and filing false cases against complainants and dissenters.

In the latest chargesheet under media scanner are 12 Muslim men charged with the murder of a Hindu eatery worker. Nine of them gave identical confession statements to the police, entire paragraphs of which were repeated ad verbatim in the chargesheet, almost as if those had been recited in unison.

All nine, for instance, “got carried away” by a crowd which exhorted them to “show the strength of the Muslims”, all of them “started sloganeering” and they “pelted stones for a long time”. The only differences in their statements come by the way of the "weapons" they carried, while one said he had a wooden bat with him, others had sticks and one bore an iron rod.

A doctor, who ignored police warnings and moved the Delhi high court to get an order in his favour to move the riot injured to the nearest hospital that could avail them critical care after police allegedly stopped him, has also been named as accused in this murder case.

Meanwhile, even as reports of violence on Pinjra Tod member Natasha Narwal inside Tihar Jail surfaced recently — Narwal and her companion Devangana Kalita have both been jailed for conspiracy and booked under the stringent UAPA — another accused, Shahrukh Khan, who is 24 and was blinded in the riots — has come out saying that he does not know the women and is unaware of the feminist collective's existence.

Yet the police submitted in court that it was on the basis of his statement that they arrested the duo. Khan, who studied only till Class VI and is now faced with grave livelihood concerns, has applied for bail on humanitarian grounds.

The Pinjra Tod members as well as other anti-citizenship amendment act protesters arrested for taking part in the riots conspiracy are presumed to have done so in a bid to attract international attention to their cause by timing it with the visit of US President Donald Trump. The police claim that the meeting where the conspiracy to organise a riot was allegedly hatched took place on January 8. But the news of Mr Trump's visit was only made public at least five days later.

But Kapil Mishra who organised a counter-rally on the evening the women had been sitting in protest, against whom there is video evidence of hate speech, and who tweeted that he would personally clear the streets of protesters and was only waiting for Mr Trump’s visit to get over, continues to remain outside the ambit of investigation. Doubts have strengthened as to whether the force is a partisan one and the probe a bold-faced sham.