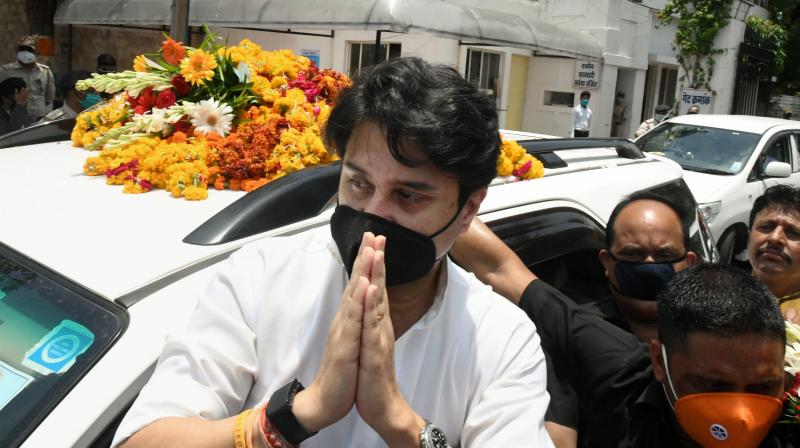 BJP leader Jyotiraditya Scindia comes out of the Raj Bhavan after attending a swearing-in ceremony for the Cabinet expansion of the Madhya Pradesh government, in Bhopal. PTI Photo

The long-awaited expansion of Shivraj Singh Chouhan’s BJP government in Madhya Pradesh finally took place Thursday, over three months after Mr Chouhan himself took the oath, but it failed to bring any cheer to the veteran leader in his fourth term.

The reason is not far to seek. Loyalists and supporters of Rajya Sabha member Jyotiraditya Scindia, a former Congressman and onetime close associate of Rahul Gandhi, whose defection to the BJP in early March led to the Kamal Nath government’s fall, totally dominated the new team, with the ministers including Mr Scindia’s aunt Yashodhara Raje Scindia.

Of the 22 MLAs who left the Congress to join the BJP along with Mr Scindia, 14 are now ministers, including 10 of Cabinet rank. Since they are no longer MLAs, having resigned from the Assembly, they must fight and win the byelections to be held shortly in order to retain their posts. Many come from the Scindia stronghold of Gwalior-Chambal.

In contrast, the CM managed to induct only five of his supporters in the expansion, leaving many more who had served in his earlier ministry disappointed.

The expansion came only after Mr Chouhan, who camped in New Delhi for over two days to get the list cleared, met Prime Minister Narendra Modi and home minister Amit Shah to obtain their go-ahead. The stamp of the BJP central leadership is quite evident, something Mr Chouhan must live with for the rest of his term, as he clearly doesn’t have the free hand he enjoyed in his first three terms.

No wonder the CM obliquely talked about “Lord Shiva having to drink poison”, widely seen as a reference to himself!

Mr Scindia’s triumph in securing a dominant role in the Madhya Pradesh government should also serve as a lesson to the Congress, which tried to marginalise him and virtually drove him towards the BJP, that led to the Kamal Nath government’s downfall.

The Congress forgot a house divided is always easier to bring down. If it had acted in time and made Mr Scindia PCC chief or sent him to the Rajya Sabha, the party would have had one more state government under its control now.