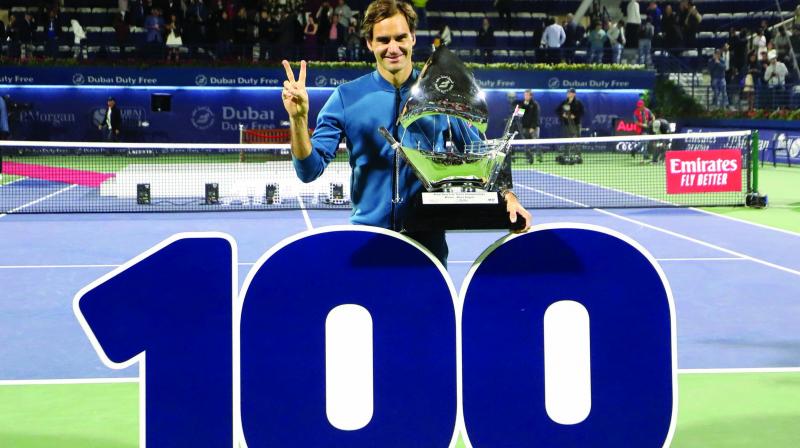 Roger Federer of Switzerland celebrates with the trophy after winning the ATP Dubai Tennis Championship on Saturday night. Federer won his 100th career title when he defeated Stefanos Tsitsipas of Greece 6-4, 6-4 in the final of the Dubai Championships. (Photo: AFP)

Roger Federer passed another great milestone: becoming the second male tennis player ever to win 100 ATP titles after the feisty Jimmy Connors. The maestro’s durability is legendary in a exacting sport like tennis. It’s amazing he still keeps dipping into a limitless tank of motivation to play the game, enjoy it and do it so well as to win titles like Grand Slams, of which he has 20, as he seems ready, at 37, to go on for some more years. It was as a 16-year-old that he first played on the ATP world tour, and 6,600 days after winning his first title in Milan in 2001 he has climbed the Mount Everest of the men’s game. That his conqueror in the Australian Open, Stefano Tsitsipas of Greece, was barely out of his diapers when Federer was making his presence felt in 2001 embellishes the Basel master’s legend. His 100 titles in 19 nations and 310 weeks as World No. 1 are unique achievements.

His game’s precision could be deconstructed into an indescribably elegant necklace of strokes, from the simple to the magical. In an age of big servers and baseline bombardiers, he keeps his metronomic Swiss watch-like game together on all surfaces, even if we accept that Roland Garros’ red shale was somewhat more challenging. The easy flow of his game and the dulcet backhand have made indelible impressions. Beyond tennis artistry, he has done more than many champions to sustain the game’s image as spotless sporting entertainment. A gentleman whose arched eyebrow is about the highest form of protest on court is an icon even the world beyond tennis should be proud of.