AA Edit | Will the government pledge of peace, women’s safety?

When the erstwhile government, which returned to power in 2019, said Beti Bachao, it was perhaps not a slogan. It was a warning 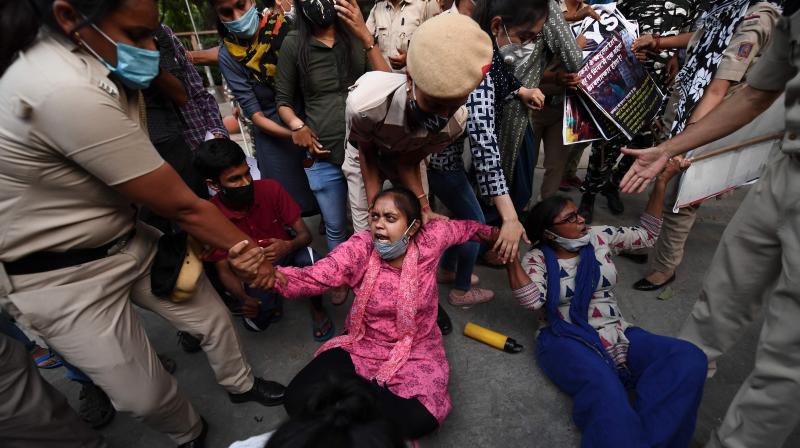 New NCRB crime data reports 59,853 crimes against women from UP in 2019, the highest among states

On a day that governments and government servants are called upon to renew their commitment to peace and the nation’s progress, rising caste crimes and back-to-back rapes — in Hathras, Bulandshahr, Azamgarh, Balarampur and now Bhadohi — have together come as a terrible reflection on governance, law and order, and society.

Amid the resulting outrage and claims — of police destroying evidence in Hathras and Balarampur in order to hasten the closure of the particular cases — Smriti Irani’s praise at the UN of Indian laws as “strong enablers” of women does not sound credible.

Save for the Prime Minister — who issued a call in general terms for “strict action” in the case — there has not been a single statement from the home minister — who is set to resume political work in poll-bound West Bengal — or from any women leaders in the government.

When the erstwhile government, which returned to power in 2019, said Beti Bachao, it was perhaps not a slogan. It was a warning.

Following the controversial midnight cremation of the Hathras rape victim against the wishes of her family, the UP police is claiming that she had not been raped and that the matter is being “twisted” to “stir caste tension”.

Even while the specific nature of the offence remains moot following the stealthy cremation precluding a second autopsy, how does this glib desexualisation of the crime lessen its severity — the victim had been permanently disabled — or its essential egregiousness?

Also pertinently, how does this — or theories of a dispute over cleaning a drain — show that it is not a caste crime, rather than prove it otherwise?

A relative has reported being told by police that there was no monetary relief to be given to the family after the death of its prospective earning member who contributed valuable labour.

But should a caste atrocity be proved to have been committed on the girl, her kin are entitled to full compensation under the Scheduled Caste and Scheduled Tribe (Prevention of Atrocities) Act.

This sly spin doctoring by police of the case thus only goes to lay bare their sexist mindset — the fact that they did not value her life and its promise — as well as their bad work ethic — of staying on the right side of the local caste dynamic and protecting their jobs instead of serving the citizen.

New NCRB crime data reports 59,853 crimes against women from UP in 2019, the highest among states. This includes not only rapes, but also dowry deaths, crimes against a minor, domestic abuse and so on. Rights denials, which lie at the core and crux of all these offences, are no doubt outside the ambit of this classification.

However, rape also being a caste crime, data shows that nine states in India, including Uttar Pradesh, accounted for 84 per cent of all crimes against dalits the same year; yet the conviction rate of offences under the Atrocities Act was only 32 per cent, with the pendency rate an alarming 94 per cent. Hate crimes against dalits went up by seven per cent in 2019.

The ruling party at the Centre and the state has accused the Opposition of playing politics in Hathras.

But what else is the Opposition supposed to do in the face of such blatant condoning of criminality as we witness in case after case?

Nevertheless, as members of the victim’s family continue to remain in effective house arrest, the borders of Hathras district have been sealed, Section 144 of the CrPC imposed for a month, and Congress MP Rahul Gandhi and party general secretary Priyanka Gandhi detained and roughed up by police on their way to the victim’s home.

Taking suo motu cognisance of the case, the Lucknow bench of the Allahabad high court issued notices to the Uttar Pradesh government. This newspaper upholds the rights to fair trial of the accused and to justice for the victim.