None can dispute the right of a US citizen to visit Taipei, but it’s the timing of her visit that raises the hackles 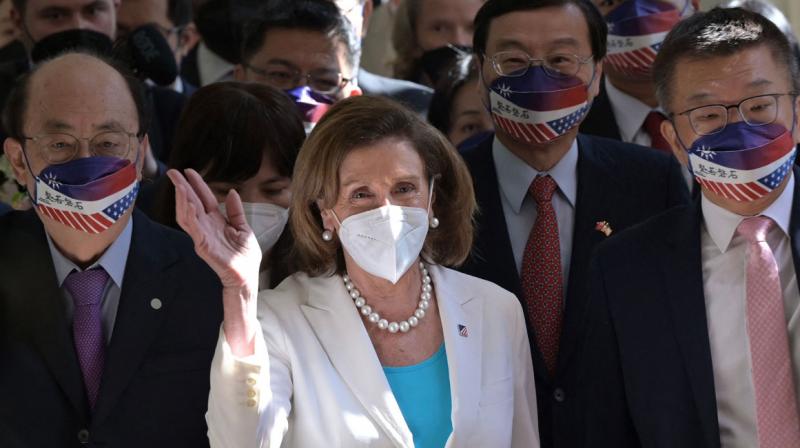 Visiting US House Speaker Nancy Pelosi (C) waves to journalists during her arrival at the Parliament in Taipei on August 3, 2022.

Nancy Pelosi’s visit to Taiwan was fraught with risk. The veteran Democrat, who is the Speaker of the House of Representatives, has played to the gallery and her constituents in becoming the first high-level US official to visit the island democracy in the last 25 years. None can dispute the right of a US citizen to visit Taipei, but it’s the timing of her visit that raises the hackles and endangers the peace at a particularly tense time for the world that stands sharply divided with the US and the West on one side and China on the other over Russia’s invasion of Ukraine.

The Republicans too are applauding the Democrats for standing up to a bully. So soon in the wake of the precision-targeted killing of the Al-Qaeda terrorist Ayman al-Zawahiri that may have helped his domestic ratings, US President Joe Biden stands diminished as the Speaker asserted her rights and independence by embarking on this journey to Taipei despite his and the military’s attempts to dissuade her.

As a long-standing critic of China’s woeful human rights record since visiting Tiananmen Square 33 years ago as a budding legislator and thumbing her nose at the Chinese in Beijing soon after, Ms Pelosi may have been attempting to leave a stamp on her legacy in her final years in public life. What her politically provocative move, postponed from April since she caught Covid, may lead to is being watched with apprehension elsewhere by nations whose economies are already feeling the heat of the war in Europe.

China issued as well as signalled threats with live fire military drills and by freely breaching the airspace and territorial waters of Taiwan. It had fulminated in reminding provocateurs of the “One China” policy, which Mr Biden agrees is still a valid principle. What more China will do in “targeted military action” is to be seen. Predictions of China taking token territory by seizing the Taiwanese island of Kinmen to up the ante are scary. It is also feared China might go beyond moral support to Russia vis-à-vis Ukraine by supplying munitions as supplies are running out.

It is the lot of the Taiwanese that is to be pitied even as China censures the Americans for pinpricks that appear too much like brinkmanship in a tussle for supremacy between two superpowers. The Taiwanese have been inured to living for long with the fear of a Chinese invasion but that anxiety would have been ramped up several notches with the Pelosi visit. The gesture of solidarity with a fellow democracy might be fine but, at a time of rampant authoritarianism, the tensions it was bound to bring in its wake could well have been avoided.

China’s moves thus far — of stopping export of sand and import of fruits — may just be the equivalent of Western sanctions against Russia. Such measures, even by a nation obsessed with its trade-oriented route to world economic supremacy, make for a feeble response. What may lie ahead would be more fearsome to contemplate. The only sobering thought is both superpowers may be chary of an outright military confrontation, which in the case of Taiwan, unlike Ukraine, is certain as the US is bound to help defend Taiwan militarily.