Nepal is wrestling with the problem of around 100 dead bodies, to which this climbing season may have added another 11. 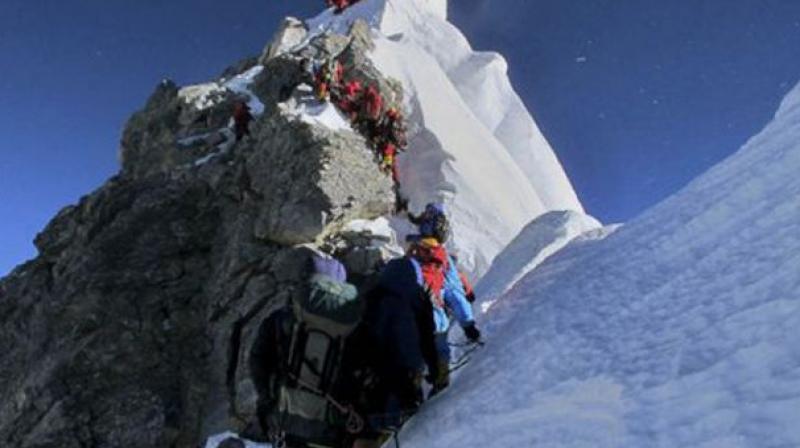 The risks of the mountains are too well-known, but that won’t deter diehard adventure junkies.

The Himalayan ranges, standing in all their majesty with an air of indescribable mystique, have been beckoning adventurers ever since Hillary and Tenzing conquered Mount Everest on May 29, 1953. Between then and now the world has changed, more rapidly in recent times as global warming melts glaciers more and dead bodies pop out as climbers undertake ascent of the peak in Nepal. It’s a facet of modern life that there are traffic jams on the roof of the world, as more climbers scramble to take the best weather window to make the climb a bit easier.  The hazards — winds in excess of 200 kmph, threats of avalanches and altitude sickness — are exacerbated by melting ice. Adding a new deadly dimension is overenthusiastic climbers, who are there simply as they can afford the $11,000 fee and the expense of reaching the top of the world.

Nepal is wrestling with the problem of around 100 dead bodies, to which this climbing season may have added another 11. Bringing dead bodies down is risky as they weigh more than three times the average weight of climbers. Adventurers bunch up on certain days due to more accurate micro weather forecasting that predicts the best climbing days. This is forcing Nepal to consider changing the rules. They may draw a lesson from the support systems in place to climb Africa’s Mount Kilimanjaro, with guides and daily medical checks.

Tragedy may have struck a group of UK climbers, including an Indian, on the Nanda Devi peak in India too as a section of climbers chose an uncharted  peak. The risks of the mountains are too well-known, but that won’t deter diehard adventure junkies. There’s also the strong belief that the dead are best left on the mountains, which are held sacred in folklore.