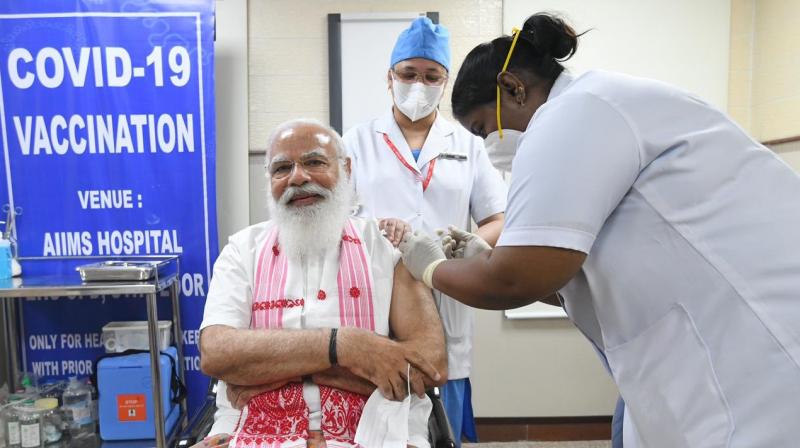 Prime Minister Narendra Modi has generated a signal encouraging a vast section of people, estimated to be in the region of 27 crores, to take the jab. (Image credit : Twitter/@narendramodi)

Participating in the vaccination drive aiming to inoculate senior citizens and those above 45 years of age with a health condition, Prime Minister Narendra Modi has generated a signal encouraging a vast section of people, estimated to be in the region of 27 crores, to take the jab. There has been a slight decline in the daily average of new cases in India but it is far too early to be dropping the guard. There are a number of regions that are experiencing another surge in infections, which can be blunted only by vaccinating close to 70 per cent of the population even as precautionary measures like social distancing and the wearing of masks is observed universally and with life-saving discipline.

There is still a debate over the efficacy of the Covaxin, which the Prime Minister took. The data and findings from Phase 3 trials are yet to be scrutinised and reviewed though it is a positive sign that the number of adverse events relating to administration of the wholly indigenous vaccine is thus far insignificant. The inoculation rate is going to be the biggest challenge for India with a huge number of two-dose vaccinations to be undertaken. The minimum number of jabs would have be in the range of 20 lakhs a day to have any impact on the big numbers to achieve anything close to immunity for the community.

The number of hospitalisations and deaths has plummeted, not only in India, and what the enhanced vaccine drive primarily promises is to bring them further down to negligible levels. Realistically, it will be months before vaccination can dent the pandemic. But is there a better way to fight the coronavirus that is evolving dangerously now into contagious variants that are threatening to sidestep the human immune system? As new threats emerge, science is already tweaking the vaccine to try and quickly take on the dominant forms like the UK, South African and Brazilian variants. A third dose of new vaccines may be needed to take care of threats from newer strains but that is a long way from where we are at the moment.

It may be India’s good fortune that the fatality rate is very low while the recovery rate is as high as 97.07 per cent. The summer ahead should see heat and humidity help more in containing the survival of the virus even as more people get immune after getting infected or get vaccinated. The key to containing urban surges is the vaccine even if there is no guarantee on efficacy against the Brazilian strain, which is said to be reinfecting those who have had the virus. Privatisation of the vaccine effort has come like a booster shot. The way forward towards opening up the economy fully as well as all the schools can only be after this fuller rollout of the vaccine programme has been in operation in the next few months and tends to people outside of the health and frontline workers and senior citizens.