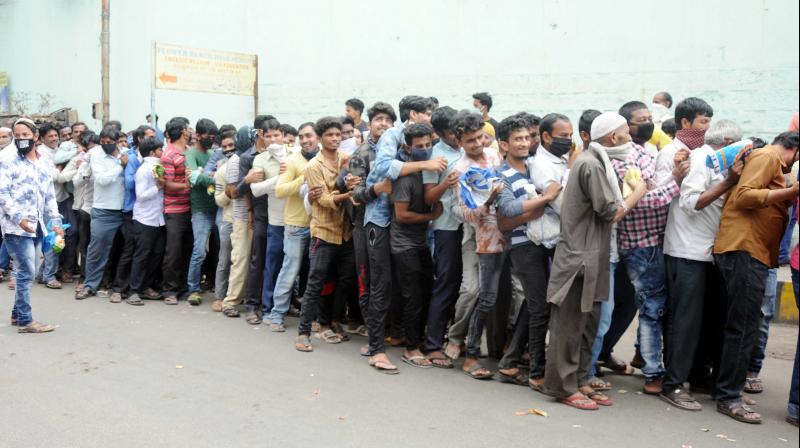 Jostling for rations in the Moghalpura locality of Hyderabad. How will the state governments manage to fight the Covid-19 pandemic if the Union government does not release funds to the states? (DC Photo: Deepak Deshpande)

State governments are in the forefront of the fight against the Covid-19 pandemic. They are putting in all their resources to implement the national lockdown, treat the sick, quarantine those under observation, and take care of the destitute.

Most states, however, are under severe financial stress. The budgets of several state governments, presented in February and March, had complained of the same, saying many of their programmes hinge on the timely disbursement of their share of GST revenues to them. The Centre, which has turned a deaf ear to the plea of the states, has not yet eased its purse strings. The pandemic has come as a bolt from the blue, and most states have little clue as to how to raise resources to meet the contingency.

Some have deprived their own staff: the Maharashtra and Telangana governments have announced deferment of employees' salaries while Kerala has asked them to donate a month’s salary to the Chief Minister’s Distress Relief Fund.

The nationwide lockdown has virtually ground the economy to a halt; nobody knows when it will be back on its feet. This means the coffers of states will continue to remain empty for the foreseeable future. This could translate into lethargy on the part of states and their workmen in the fight against Covid-19, which could further endanger the very existence of our nation.

The Union government must step in now and stop the states from slipping into a vicious cycle. It must immediately release the share of tax revenue as per the law and come up with a package to help the states effectively implement measures to prevent the spread of the virus. The government should not take refuge in fiscal conservatism and cite the Fiscal Responsibility and Budget Management Act. Instead, it must help the states, with proactive steps, join forces in the national cause.