With China digging in well inside Indian territory, it is hard to see what these military talks might achieve 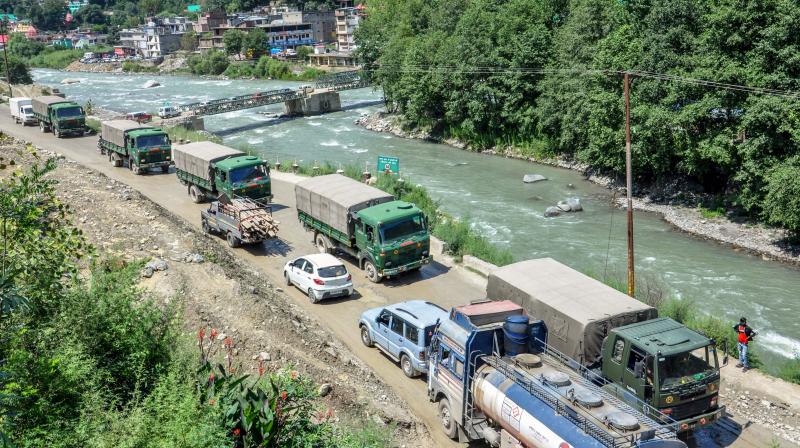 Military sources said there had been no forward movement on the ground in the past two weeks. PTI Photo

On Tuesday, as the Indian Air Force’s first five Rafale fighters were on the way from a Dassault facility in France to the Ambala airbase, the Chinese foreign ministry claimed the situation in Ladakh was “continuing to head in the direction of easing and cooling down” and the People’s Liberation Army and Indian troops had “completed disengagement” in “most locations”.

As Indian Army sources pointed out, this preposterous claim was at complete variance with the facts. On Thursday, Beijing’s ambassador to India Sun Weidong, not surprisingly, stuck to the same script, saying the process of disengagement was almost over in most locations, and claimed China posed no “strategic threat to India”. (Astoundingly, he also blamed Indian Army aggression for the June 15 Galwan clash, in which Col. Santosh Babu and 19 other Indian soldiers were slain.)

That the pullback of forces, as agreed to by the two commanders on July 14, is far from over was made clear by external affairs ministry spokesman Anurag Srivastava almost immediately, who explicitly noted while “some progress” was made, the disengagement process has not been completed, and expressed hope that the Chinese “will sincerely work with us for complete disengagement and de-escalation”.

The Indian Army was even more explicit. Military sources said there had been no forward movement on the ground in the past two weeks, after the last meeting of the corps commanders, who are due to meet again in the next few days.

But with China digging in well inside Indian territory, it is hard to see what these military talks might achieve.

Worryingly, the Chinese ambassador also claimed that at Pangong Tso, with the PLA 8 km deep inside Indian territory, China’s “traditional customary boundary line is in accordance with the LAC”. (In Depsang Plains, the intrusion is 18 km deep.)

The PLA’s only pullback in Pangong was from Finger 4, till where it intruded, to Finger 5, whereas till April the Indian Army’s patrols used to extend till Finger 8.

Now China seems to suggest this entire area is Chinese soil, and on top of that the so-called “buffer zone” in Galwan Valley is being carved out of what was seen as Indian territory.

This is a clear illustration of the “salami slicing” tactics Beijing is using to change the reality in Ladakh, completely disregarding the agreements reached at the military talks.

“Salami slicing” tactics is what an aggressor uses to claim another country’s territory and challenge its rival’s claim so forcefully that the land in question becomes “disputed”.

In the process of “resolving” that new dispute, the aggressor ends up with at least a part of the land. This is what China is doing in eastern Ladakh, in the process of creating a “revised status quo”, which is vastly different from the status quo of April 2020 that India has been struggling to restore for the past several months.

What has aided China in this endeavour, and not helped India one bit, is the reckless statement made by the Prime Minister on June 19 where he claimed there was “no intrusion” by the Chinese.

While the PMO later clarified it referred only to Galwan, that distinction was lost on the Chinese, who have exploited it to the hilt. India must stand extremely firm now, and not allow the Chinese to change the status quo.