The fecklessness of the marking system and the teachers and technology involved in it boggle the imagination. 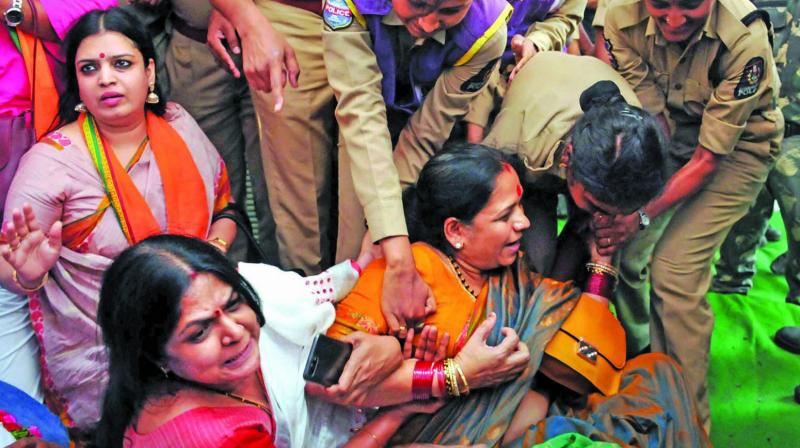 Telangana police detains BJP leaders and workers during a protest over the alleged massive bungling in intermediate examination results, which led to suicide by at least 23 students, in Hyderabad. (Photo: PTI)

Society has been known to fail its youth. It may have outdone itself, and horrendously so, in Telangana, where glitches in the software system tallying the marks of Intermediate candidates have led to a spate of student suicides. It is no consolation to the grieving parents of at least 23 young, aspirational students that faulty technology led to the goofups in the results. A failure rate of 33.67 per cent in the exam, as 3.28 lakh students didn't make the grade out of 9.74 lakh students, must have set alarm bells ringing. The IT firm whose failure was exposed by ludicrous handling of several thousand marksheets must face the full wrath of the State and society. In further glitches with human error adding freely to the grotesque situation, a student scoring 99 marks was given zero, which led to her taking her life. The fecklessness of the marking system and the teachers and technology involved in it boggle the imagination.

Having seen the scale and magnitude of complaints pouring in soon after the results were announced on April 18, the state should have acted with alacrity and publicly clarified the matter was being looked into. Inaction suggests there is little care and concern for young people in our society. We know that young people are extremely worked up due to our exam system. The enormity of life and career-defining exams, and the entrance tests to elite institutions of higher learning can have a great impact on young minds as they complete basic education and aim to step out for graduate and vocational training. It would be an understatement to say diligence should be the primary feature of correcting answer papers and assigning marks in threshold exams. Automation can help speed up marksheet processing, but lack of attention to detail and the failure to run the most basic tests of the process before releasing the results suggests criminal carelessness.

It is another matter whether any exam should be allowed to have such a bearing on students’ lives. The systemic faults in not having sufficient interactions with youth regarding life and the bearing competitive exams have on it are clear. If parents don't have the time to sensitise their vulnerable children on exam pressure, the education system must take up the responsibility because it can command attendance and demand attention in such crucial matters. The irony is that while Telangana can take justifiable pride in the scholastic achievements of its students, as many top the common entrance tests, it is now caught in a situation in which student suicides have assumed shocking proportions. The committee must first fix accountability. However,  there are greater tasks ahead in handling young people than seeing the failure rate in numbers, rather than from a human perspective. Our children need our help in seeing life and death in the right perspective.