It’s time for “Battle cry Bihar”! And this stellar star cast can take the pants off just about any actor from Bollywood 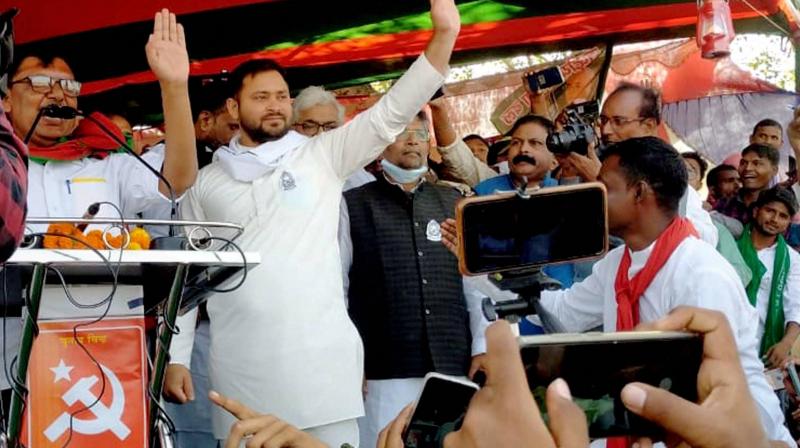 “It’s not the time for hawa hawai,” declared our beloved Prime Minister as he savaged the Opposition RJD in Bihar and mocked the “yuvraj” (Tejashwi Yadav). Pandemic or no pandemic, voters in Bihar showed up in decent numbers (54 per cent) during Phase 1 of the Assembly polls --the first major election of the pandemic. I am not holding my breath for Phase 2 (November 3). I don’t think too many other people are either. Diwali will soon be upon us, and it’s time for some cheer! Without my favourite weekend distraction (movies at the nearest multiplex), I have been getting my giggles via OTT platforms. We are all so spoilt for choice, the head spins!

I was never a gym rat… So I happily imagined I would never turn into a “pandemic binger” -- matlab, for the first few months of the Covid curse, I stayed away from compulsively watching any and every new show dropping on this platform and that platform. My children kept recommending all sorts of amazing series -- Turkish, Korean, Spanish -- but I chose books and writing over those. More fool me! Now it is a bit too late to convert, jump in and spend five straight hours feeding on tight, taut, well-scripted international/national series everybody is raving over, but I do what hoarders of precious things frequently attempt -- I save up my free hours for the weekend and catch one or two of the latest releases that have caught my fancy. Even though Serious Men is nearly a month old, I only managed to watch it earlier this week -- and I was hooked from the opening scene itself. Since I hadn’t read Manu Joseph’s brilliant and multi-layered book, on which the series is based, my mind was unprejudiced and receptive. In any case, I watch just about anything featuring Nawazuddin Siddiqui, and the dialogue delivered in the trailer had me begging for more. Once I started, I got into it fully, more because the city of Mumbai itself was Ayyan Mani’s (Nawazuddin’s character) co-star! There is something very specific and particular about life in Mumbai’s chawls. And director Sudhir Mishra captures the tiny and untidy moments through camera work that is intimate but never intrusive. The script is economical and revelatory without being over-reaching or obvious. Apart from Nawazuddin with his controlled rage, disillusionment, anguish and impatience with his lot, the series is enriched by the presence of a marvelous little chap, Aakshath Das, playing Adi Mani, Ayyan’s hearing-challenged son, with total transparency. It is a very tough role for a kid to pull off convincingly, since the dialogues are “constructed” (watch… and find out), but the line this kid hurls arrogantly at pompous adults -- “Primitive minds: I can’t deal you!” -- was just brilliant! His clever and ambitious father has tutored Adi to spit out that scathing sentence at those asking him tough questions to establish his “boy genius” credentials. When he is stumped for an answer, Adi throws this well-rehearsed insult at them and stomps off angrily! It is also the line that ends the series on a very poignant note, on a deserted beach. Serious Men is a scathing commentary on caste politics, dishonesty and corruption.

As Mumbai struggles to get back on its feet, with more and more “relaxations”, especially when it comes to leisure and entertainment activities (restaurants, gyms, bars, movie theatres gradually opening), I am wondering whether the pandemic has completely changed the way in which we seek a bit of fun and camaraderie. Movies have always been up there as the number one stress busters. We used to spend crazy amounts on weekend movie outings at plush multiplexes. We took the trouble to dress up and make a real occasion out of it. The entire “experience” was enjoyable, including watching a film on a big screen, particularly with other people. It didn’t matter that the cinema hall was filled with strangers. The theatre experience itself was a collective one -- shared emotions bound strangers together for a few short hours. That comfortable habit has been convincingly broken. Watching movies or a favourite series in the privacy of your home has become a highly personalised and transformative act.  We watch at our convenience, often relaxing on a comfy bed and munching micro-oven popcorn. There is no interval to break the spell, plus, it is we who possess the power to walk away, do something else, and come back nonchalantly, after an hour or so. Just the convenience of being able to pick up where one had left off has made a lot of diehard movie fans rejig their entertainment preferences -- and from the look of it, web series are winning this round.

Personally speaking, I doubt I will be foolish enough to book tickets at a multiplex to watch a big-ticket film -- regardless of the star cast. I am a little bratty now and have grown accustomed to calibrating and curating my entertainment hours as per my convenience. I enjoyed Emily in Paris over three nights of carefully measured watching… savouring every tiny glimpse of the most gorgeous, most glamorous city on earth. That holds true for another French import Call my Agent, shot in Gay Paree (ummmm -- pun intended).  It features throwaway lines like “Fragility is an actor’s strength”. Rebecca was a huge let down, as was A Suitable Boy. But the Korean Crashlanding made up for those wasted hours.

I am looking forward to Scam 1992, the Harshad Mehta story that has received great reviews and made an overnight star out of Pratik Gandhi.

These acting opportunities across OTT platforms are creating their own star system, which is far more organic and genuine than the manipulations of mainstream Bollywood. I wonder how many cine-goers will want to pay a packet to watch those tired, overexposed veterans still clinging on to their ancient superstar images. There are any number of competent, credible “non-star” actors delivering big time in one hit show after another. They have created their own fan following and niche. The best thing about watching your favourite shows from home? No masks! It feels great to just breathe minus discomfort and watch a frisky fashionista -- Lily Collins as Emily -- taking on the snooty French and winning the war!

It’s time for “Battle cry Bihar”! And this stellar star cast can take the pants off just about any actor from Bollywood.