Aakar Patel | Are India, US in military pact? It’s not quite clear

With no discussion in Parliament, PM Modi began drifting India into a strategic partnership and military alliance with the United States 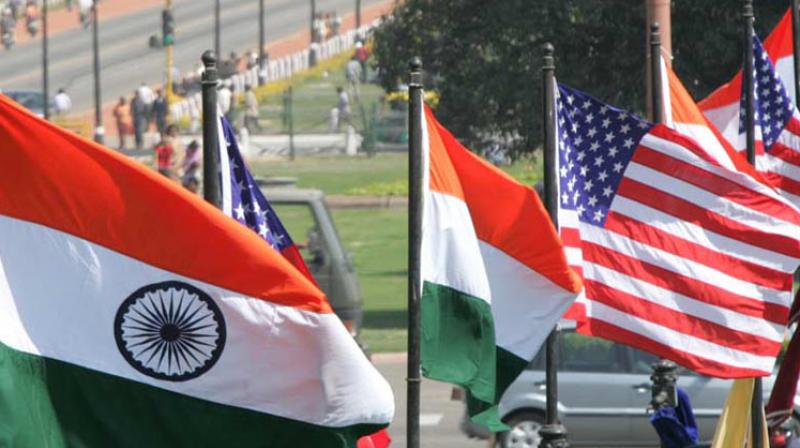 In February 2020, during US President Donald Trump’s visit to India and just some weeks before the Ladakh crisis began, Mr Modi committed India to this agreement, essentially ranged against China. (Representational image: PTI)

Is India in a military and strategic alliance with the United States or is it not? No one seems to be able to give a clear answer to this question.

In January this year, the United States declassified a 2018 document that says its national security challenge is “to maintain US strategic primacy… while preventing China from establishing new, illiberal spheres of influence”.

It lays out the case of how China’s rise will radically change the region and challenge American influence globally, and concludes that “a strong India, in cooperation with like-minded countries, would act as a counter-balance to China”.

To this end, the “desired end state” the US sought was to be “India’s preferred partner on security issues”, and that “the two cooperate to preserve maritime security and counter China’s influence”. As part of this, the Americans would also have as an objective the creation of a Quadrilateral (“Quad”) framework that would pull in the navies of India, Japan, Australia and the US as the “principal hubs” ranged against Chinese influence. Over a couple of pages, the US lays out the plan of how it will make India a “major defence partner” and how “a strong Indian military (would) effectively collaborate with the United States”.

The document lays out also what is intended to be done with China: prevent it from “harming US competitiveness” and “prevent China’s acquisition of military and strategic capabilities”.

The zone of the Quad’s operations, the so-called “Indo-Pacific”, is centred around the Strait of Malacca, a narrow passage linking the Indian Ocean with the Pacific, between Malaysia and Indonesia through which the bulk of China’s imports and exports flow. The dependence of China on this passage has led China to consider the “Malacca Dilemma” and is behind the Belt and Road Initiative, opening up alternative routes.

So why was India signing up for this alliance to thwart China? That is not clear. With no discussion in Parliament, with no interviews to the media and no press conferences, with no reference to this in his manifestos, Prime Minister Narendra Modi began drifting India into a strategic partnership and military alliance with the United States. In February 2020, during US President Donald Trump’s visit to India and just some weeks before the Ladakh crisis began, Mr Modi committed India to this agreement, essentially ranged against China.

On October 27, 2020, during the visit of then US secretary of state Mike Pompeo, India signed the Basic Exchange and Cooperation Agreement (BECA). It would help India access American intelligence to improve the accuracy of the Indian Army’s missiles and armed drones. This heralded Air Force-to-Air Force cooperation.

The second agreement signed was the Logistics Exchange Memorandum of Agreement (LEMOA). It allows the two nations’ militaries to replenish from each other’s bases, and access supplies, spare parts and services from each other’s land facilities, airbases and ports, which could then be reimbursed. LEMOA is for India-US Navy-to-Navy cooperation. Inking the BECA pact in New Delhi, Mr Pompeo attacked China directly: “I am glad to say that the United States and India are taking steps to strengthen cooperation against all manner of threats and not just those posed by the Chinese Communist Party.” Then US defence secretary Mark Esper, who was in New Delhi with Mr Pompeo, said: “We stand shoulder to shoulder, in support of a free and open Indo-Pacific for all, particularly in light of increasing aggression and destabilising activities by China.”

India’s defence and external affairs ministers, Rajnath Singh and S. Jaishankar, who were standing next to Mr Pompeo and Mr Esper, did not name China. Rajnath Singh’s prepared remarks (which were later changed) had a reference to this line, which was later deleted: “Excellencies, in the area of defence, we are challenged by reckless aggression on our northern borders.” This change was not given to the Indian translator in English, who read out the original text and the Americans released it, much to India’s discomfort.

When that paper on America’s strategy was declassified, China said that “its content only serves to expose the malign intention of the United States to use its Indo-Pacific strategy to suppress and contain China and undermine regional peace and stability”. And that “the US side is obsessed with ganging up, forming small cliques and resorting to despicable means such as wedge-driving, which fully exposed its true face as a troublemaker undermining regional peace, stability, solidarity and cooperation”. India did not react to the release of the document.

The third pact, signed earlier, was the Communications Compatibility and Security Agreement (COMCASA). It allows India access to encrypted communications equipment and systems so that Indian and US military commanders, and the aircraft and ships of the two countries, can communicate through secure networks. BECA, LEMOA and COMCASA completed a troika of “foundational pacts” for deep military cooperation between the two countries.

COMCASA was signed in September 2018, five months after Mr Modi travelled to Wuhan to meet Chinese President Xi Jinping. The “Wuhan spirit” agreement between Mr Modi and Nr Xi, signed on April 28, 2018, says that India and China would not be rivals but would cooperate with each other. They would “push forward bilateral trade and investment”. The rest of the statement is anodyne, in keeping with Mr Modi’s fondness for informal summits with no particular agenda, but the spirit referred to is that of cooperation and not rivalry.

The problem, whether he has fully understood it or not, is that Mr Modi was hunting with the hounds and running with the hares. At the same time as Mr Modi was holding hands with Mr Xi, India was also winking at President Trump’s Indo-Pacific strategy aimed at China.

In May this year, India’s Army Chief Gen. M.M. Naravane told PTI in an interview that the Quad was not a military alliance: “The Quad neither intends nor attempts to be a military alliance. It is meant to be a plurilateral grouping which focuses on issues specific to the Indo-Pacific. Some countries have portrayed the Quad as a military alliance to raise unsubstantiated fears despite no concrete evidence to show the same.”

So, is India in a military alliance with the US against China, or is it not? We do not know, because there has been no discussion, no transparency and most likely no real thinking on this matter at our end.