Manish Tewari | The centrality of dissent

Ultimately what remains are the voices of dissidents celebrated for speaking truth to power, for attempting a restoration of humanity 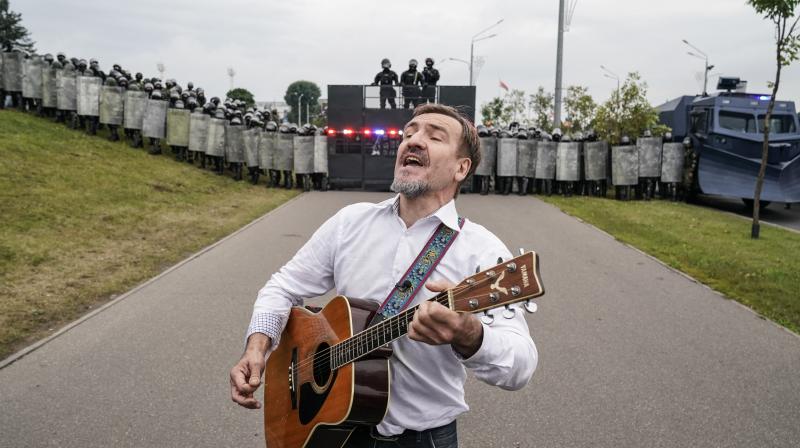 A man plays a guitar in front of riot police line during Belarusian opposition supporters rally near the Palace of Independence in Minsk, Belarus

The Nasdiya Sukta, a major verse in the Rigveda, states, “Then He, who created all that is, or did not, Who looks upon everything from the highest heaven, He alone knows. Or maybe He too does not.”

In its very first intellectual iterations the Indic civilization laid down its commitment to doubt and dissent, its determination to address the ambiguities of both the human mind and the omniscient gods through a critical lens.

It was this combination of constant seeking and continual absence of certitude that made our civilisation so fecund. A crucible of key human ideas and systems of thought.

Questioning shaped us. Our foundational texts, the key Upanishads, were exploratory, provisional, in their wisdom. No rajan, no rishi, no god, could escape the sincere question. None could turn their face away from the mirror.

Anyone could be cross-examined on their dharma, from the unimpeachable Yudhishthira, to the divine Rama and Krishna. Your conduct defined your stature. No one’s station was fixed. It was made and re-made through beliefs and action. It was always up for interrogation.

The genius of Mohandas Gandhi, Jawaharlal Nehru and Babasaheb Ambedkar — who gave up their entire lives to restore a wounded civilisation — lay in the same seed: constant self-examination and self-correction; and a brutal honesty inextricably aligned to the greater good.

The free society they struggled to create, even as it seems to borrow from the language of a more recent West, actually owes its deepest debt to our own ancient impulses.

More than 1,600 years after the glorious triumph of dissent in the death of Socrates, the Magna Carta was the first successful act of political dissent in 1215. It hewed into stone the first principles of Constitutional Democratism and sowed the seeds of a million mutinies.

It proclaimed “No free man shall be seized or imprisoned, or stripped of his rights or possessions, or outlawed or exiled, or deprived of his standing in any other way, nor will we proceed with force against him, or send others to do so, except by the lawful judgment of his equals or by the law of the land. To no one will we sell, to no one deny or delay right or justice”.

It gave birth to a central tenet of modern societies, “Be ye ever so high, the law is above you”, by holding that no man is above the law, not even the king. The Magna Carta has been for 800 years a plinth idea of free people, free societies and free nations around the world.

On the continent, the Magna Carta was succeeded by the Renaissance and Reformation and the battle between old blind feudalisms and dogmas against the engines of human thought was noisily afoot. Answers were demanded not just from divine rulers but also from divinity. Political dissidents were persecuted, exiled, and heretics often burnt at the stake.

But the tsunami of change was beyond being bottled anymore. The next few hundred years would see more change than the millennia and a half before. The fruit of human inquiry would flower. Technology in the shape of the printing press would spread dissident ideas rapidly and spark fresh questioning and reform movements. It would hasten the end of Europe’s Dark Ages.

The Age of Enlightenment would push for individual liberty and religious tolerance. The English Bill of Rights in 1689 would limit the powers of the monarch and set out rights of individuals including free speech.

The founding of the United States of America itself would itself become perhaps the most successful act of historical dissent — a revolt against the feudal order of Europe by people who went to the New World to create a new land of equality and opportunity.

Dissent is thus cardinal to the idea of the United States. The American founding fathers enshrined the right to dissent in the First Amendment to the Constitution for the American nation was baked in the oven of contesting ideas. Justice Oliver Wendell consecrated this in his famous dissenting opinion “Abrams vs United States” a century ago.

He wrote, “But when men have realised that time has upset many fighting faiths, they may come to believe even more than they believe the very foundations of their own conduct that the ultimate good desired is better reached by free trade in ideas.”

The twentieth century saw the rise of Communist and Fascist regimes. These regimes were set against all dissent. (One reason Nehru, with rare foresight and integrity, refused to meet Benito Mussolini in 1936, even while transiting through Rome.)

It saw the monstrous excesses of Stalin and Mao, just to name the worst two. An estimated 50-100 million people, including their finest minds, died due to their autocratic — not-to-be-questioned — policies. In time both schools of thought and governance collapsed, having inflicted untold suffering on innocent millions.

Adolf Hitler’s concentration camp regime also commenced with the persecution of his political opponents, the Social Democrats. They were tortured and executed by the Nazi Gauleiters and Reichsleiters. While the Social Democratic ideal survived the ravages of Nazism, Hitler and his mistress were compelled to commit suicide and their bodies were charred beyond recognition. Mussolini and his mistress, similarly, were strung up in public by their own oppressed countrymen.

Ultimately what remains are the voices of dissidents celebrated for speaking truth to power, for attempting a restoration of humanity's faith in itself.

Writer Alexander Solzhenitsyn, Soviet communism’s trenchant critic, built his Nobel Prize lecture around a Russian proverb: “One word of truth outweighs the whole world.” Andrei Sakharov, another famous dissident, stated that, “A man may hope for nothing, but nevertheless speak because he cannot simply remain silent.”

The Indian National Movement is easily the finest example of the power and creativity of dissent, both internal and external. One drove out by moral force and principled protest the most powerful colonial power in history since the Romans.

The other, the healthy, productive dissent within the key architects of the freedom struggle — arguably the greatest assemblage ever of remarkable leaders — is what made the former possible.

From their arguments, their disagreements and agreements, their unwavering goal of the greater good, that the sublime idea of India was born.

The argumentative Indian is not a trope. It is the truth upon which our civilisation stands.