The PLA also knows well they can’t trust the Tibetans: a word from their Leader in Dharamsala and the troops will desert 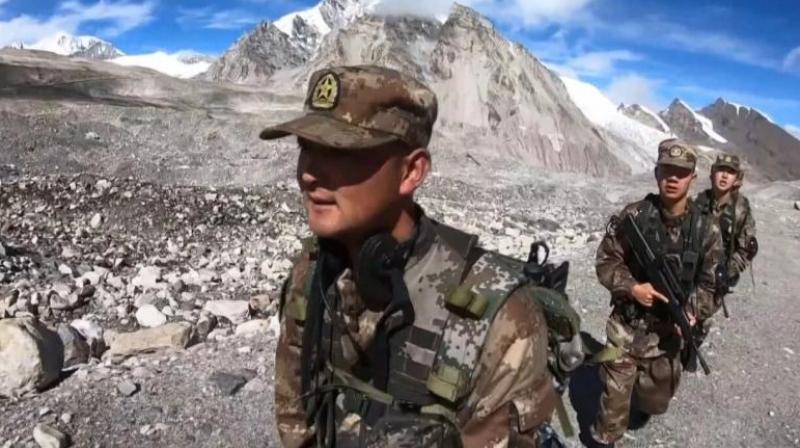 China has a serious problem. Beijing claims that it “liberated” Tibet 70 years ago, but in the recent confrontation in eastern Ladakh, it was the Tibetan troops serving with the Indian Army who successfully fought against the Chinese.

When China’s overlord Xi Jinping, who is also chairman of the Central Military Commission, visited Lhasa last week, on July 22 and 23, he is bound to have discussed this burning issue, especially after his tour of the Indian border region the previous day.

In Lhasa, Mr Xi met the PLA’s top brass stationed in Tibet as well as their Western Theatre Command bosses from Chengdu. Mr Xi didn’t mention the recruitment in his speech. “Over the past 70 years, troops of the Tibet Military District successfully completed a series of heavy tasks in the snowy plateau and withstood the test of the arduous environment and complexity of the country in order to uphold national security and unity and promote the development of Tibet,” he said. With Gen. Zhang Youxia, CMC vice-chairman, and a large number of three and two-star generals in attendance, the issue must have come up at a closed meeting.

The question of Tibetans’ recruitment in the PLA has become acute for the CMC after Nyima Tenzin, a Tibetan officer, sacrificed his life during an Indian Army operation to take control of the Kailash range on the southern bank of Pangong Tso (lake) in Ladakh on August 29, 2020. At that time, many in India discovered the existence of the Special Frontier Force (SFF) Tibetan troops, also known as Establishment 22 or Vikas Regiment. In the night of August 29-30, Tibetan commandos managed to capture from the Chinese a string of strategic high-altitude areas on the Kailash range. It was a resounding victory for India.

The PLA, in contrast, has very few Tibetan soldiers and practically no local officers.

From that time, rumours circulated that the PLA wanted to replicate the SFF, but it’s doubtful if Beijing can succeed, for several reasons.

In the meantime, the Chinese propaganda machine is working full swing. A few weeks ago, a Tibetan female sniper called Dawa Choekar came into the limelight: she was described by CCTV Military as “an amazing female soldier in Special Forces”. It said: “The story of her efforts to achieve a counterattack [against India?] is more exciting than you think!”

Dawa belonged to the first mobile detachment of PAP’s Tibet Corps; she enlisted in the Army in September 2013. “She broke through the language barrier, kept reading the news and looking up the dictionary every day,” the website said, adding she could write “a neat application for joining the party”. It is worth noting that recruits have to first join the Communist Party.

Nobody can deny Tibetans have always been good warriors; in the 1950s-60s, the Khampa freedom fighters gave a nightmare to Chinese generals for years. There were persistent rumours recently that the PLA was recruiting “exclusive military formations of ethnic Tibetans” That would be entirely new, and difficult to corroborate.

On June 4, China National Defence News commented on the National Defence Education under Conditions of Dispersion: a farmer living near the border was quoted as saying: “Our village has a special geographical location, and our home is connected to the ‘gate of the nation’ [Indian border]. To protect our home is to defend the border.”

That is the formula repeated ad nauseum by party cadres; the website says that in Shigatse City enlistment has risen by an average of 25.8 per cent: “With the continuous advancement of the preaching squad, the national defence awareness of herdsmen continued to increase… it has become the norm for the military and civilians to join hands to defend the border.”

On March 10, 2021, China Tibet News referred to the recruitment process. It appears some 3,800 people applied for recruitment in Tibet in the first half of the year; it was not specified if they were Tibetans, probably they were, though the recruitment appears to cover the PAP and the militia too.

On March 8, 22 young women from all seven cities (also known as prefectures) in the Tibetan Autonomous Region (TAR) passed the preliminary screening and took part in the final conscription medical examination at TMD hospital. Under China’s “Military Service Law”, male citizens who have turned 18 can each year register for military service before June 30. The applicants are regular high school graduates, full-time college graduates and current students, all between 18 and 22.

If this information is correct (17 women selected out of 753 candidates), the induction of Tibetans is minimal, some two per cent for the women, which means around 60-65 men would be selected. One can think the proportion may be higher for men, but even if it is five per cent, it makes 150 recruits. Given that there are two recruitment sessions every year, one can evaluate the number of new male recruits may be 300 per year.

This is without taking into account “special recruitment drives”, if any. (Nothing has been reported so far in Chinese websites and blogs).

It is, however, certain that a large number of candidates won’t be able to pass the “political” exam, which is crucial for the PLA or the paramilitary forces like the militia.

Communist China sees with a certain envy, if not jealousy, how India has managed to recruit several thousands of Special Forces troops among the Tibetan community in exile. The PLA also knows well they can’t trust the Tibetans: a word from their Leader in Dharamsala and the troops will desert. It’s much easier to do propaganda films than to change the hearts of the local population.

There’s no doubt that all these issues were discussed at the encounter between Xi Jinping and the generals in Lhasa on July 23. And while all this is ominous for India, it will remain a formidable task for the CMC to recruit Tibetans that the Communist Party can actually trust.