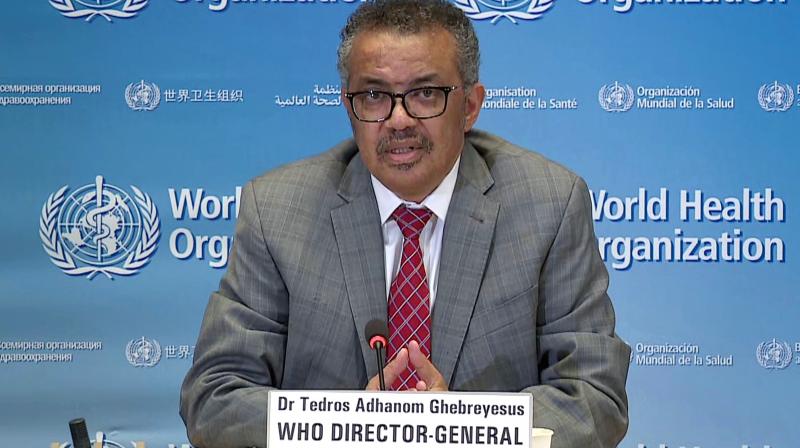 TV grab taken from the World Health Organization website shows WHO director-general Tedros Adhanom Ghebreyesus as he delivers a news briefing on COVID-19 (novel coronavirus) from the WHO headquarters in Geneva on March 30, 2020. (AFP)

With reported global Covid-19 infections now touching 7,20,217 with 33,903 confirmed deaths across 196 Westphalian entities at the time of writing, this pandemic is truly global in every sense of the word. However, ultimately there would be a post-Covid-19 world. What would it be like? Is the current pandemic the first inflection point of the 21st century?

The 20th century had five major geostrategic breakpoints. The First World War (1914-18), the Second World War (1939-1945), the Cold War (1945-1991) and the division of the world into the East and West blocs with some professing non-alignment, the demise of imperialism and colonialism, and the rise of newly liberated nations across much of the world. The end of the Cold War in 1991 and the rise of unipolarity and globalisation was underpinned by the Washington Consensus.

It is not that there have not been influenza pandemics earlier after the maturation of modern medicine. There was the Spanish Flu during 1918-20, the Asian Flu 1957, Hong Kong Flu 1968, Severe Acute Respiratory Syndrome (SARS) 2002 and the West African Ebola virus epidemic some years back. However, each of these never got elevated to the level of a geostrategic event. Why then is Covid-19 different even though fewer people may ultimately succumb to the disease than what is anticipated?

Covid-19 is different because it is universal; there have been known cases in 196 countries and territories around the world. The previous five health events had a more localised influence. Currently three billion out of the eight billion people on Planet Earth are in the throes of an unprecedented lockdown. More than one hundred nations around the world have put their people under some form of punitive restrictions or the other. Global travel has all but stopped, supply chains stand disrupted and the most primitive form of disease prevention — 'stay away from each other,' known by the chic-sounding nom de guerre social distancing — seems to be the only weapon in the toolkits of governments. Medical practitioners have been experimenting with what is colloquially called “hit and trial” to save the most critical.

However, the biggest failure has been the lack of any substantive global leadership to pre-empt or prevent the proliferation of the virus. What are the known knowns at the moment? The World Economic Forum website on March 20, 2020, had this to say —sometime in December 2019, 27 of the first 41 people hospitalised (66 per cent) passed through a market located in the heart of Wuhan city in Hubei province.

However, it was only on December 31, 2019, that China notified the World Health Organisation (WHO) of several cases of an unusual pneumonia in Wuhan. Even as late as even between January 9 and January 11, 2020, WHO put out bizarre tweets either downplaying the situation or trying to undercut travel advisories that were anticipated.

It was only on the 20th and 21st of January, 2020, that WHO conducted its first field visit to Wuhan. It is apparent from a perusal of the summary of the report that the full impact of the epidemic was not grasped even three weeks after China had notified the WHO. It took another five weeks before the director-general of WHO, Tedros Adhanom Ghebreyesus, declared Covid-19 as a pandemic on March 11 2020.

It also calls into question as to why WHO did not question China about the whistleblower doctor Li Wenliang who in early December 2019 had posted in medical chat groups that a new SARS-type illness had started manifesting itself in Wuhan a full month before China grudgingly informed the WHO. It is another matter that this brave whistleblower is ostensibly dead because of the same Covid-19 that he exposed.

It is, therefore, clear that there has been gross failure of the WHO leadership. It was both negligent, if not complicit, in the initial coverup and thereby needs to be investigated by an international group of medical jurists under the joint supervision of the International Court of Justice (ICJ), International Criminal Court (ICC) and the United Nations Security Council (UNSC). If the bureaucratically top-heavy United Nations Security Council was to argue that these bodies do not have the mandate to carry out such an exercise then the UN General Assembly should amend their remit.

The second is the failure of the United Nations leadership itself. The UN secretary general has been extremely slow in coordinating a global response to the situation while the rest of the UN has all but abdicated its responsibility. The UN Security Council no longer meets and most missions have either shut shop or pared down their presence to the bare minimum because of the situation in New York. Perhaps the UNSC needs to physically move to somewhere safe to continue functioning effectively.

Even the G-20 that was created in the wake of the global economic meltdown in 2008 had its first virtual summit only on March 26, 2020 -- a full 11 weeks after the initial report to the WHO. What they come up with and how it would be implemented remains to be seen. So far all responses have been national if not nationalistic. Most countries and cities have tried to isolate themselves to insulate their populaces. This is also the result of sustained assaults by right wing bigots on globalisation and the neo-liberal global order at whose heart lies the United Nations system. It seems to have been severely weakened by this continuing rampage.

In the post-Covid-19 world the institutions of global governance would have to be revisited and remodelled so that they have the nimbleness to respond swiftly to emerging global challenges. Moreover, countries and institutions would have to be held accountable for practices, either deliberate or inadvertent, that have put humanity at risk and are testing the resilience of national healthcare systems around the world. Both in the developed and the developing world, healthcare paradigms and national economic priorities, especially social safety nets for the most vulnerable sections of society, would have to be reimagined and re-budgeted because what would follow Covid-19 is a deep economic recession that would ravage the poorest.