Patralekha Chatterjee | Polarisation in pandemic times is the price we pay 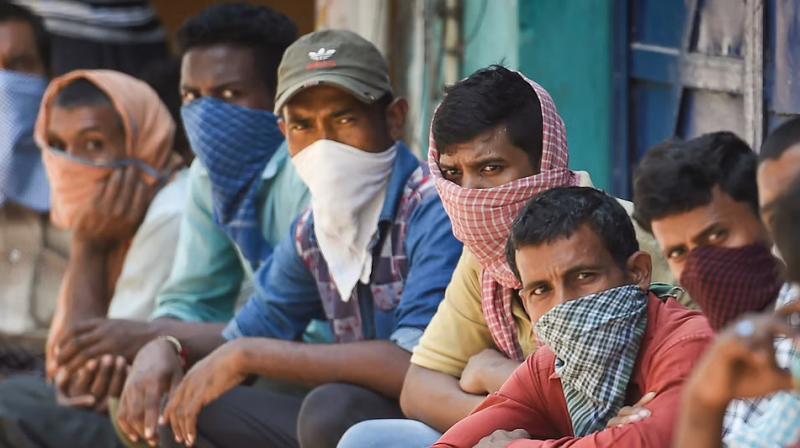 It’s no secret that millions of jobs have been lost since the onset of the pandemic and workers who are part of the informal sector, the mainstay of the Indian economy, have been very badly hit. (Representational image: PTI)

How does one capture one’s feelings about 2021 as it draws to a close?

Two narratives leap out — one, religious polarisation; two, economic misery as the Covid-19 pandemic rages. There is good reason to believe the first is being used to rally the base as well as keep the second out of the limelight.

The narrative grabbing headlines in recent days pivots around the persistent drip-drip of hate speech against minorities, hate crimes and mobs taking the law into their own hands on one pretext or the other.

Arguably, neither hate speech nor hate crime nor mob justice is new. What is new, however, is the brazenness with which they are happening.

In December alone, a “dharam sansad”, or a religious parliament, turned into a hate-fest in the holy city of Haridwar when some Hindutva protagonists openly called for a “war against Muslims”. On Christmas Eve, effigies of Santa Claus were set ablaze in Agra, Uttar Pradesh, by members of Hindu vigilante groups chanting “Santa Claus Murdabad”. They claimed that the mythical figure was part of some giant conspiracy by Christian missionaries to convert people. The day after Christmas, a life-size statue of Jesus Christ was desecrated in Ambala, Haryana, by unidentified individuals. And on Christmas Day, the home ministry “refused” to renew the foreign-funding licence for the Missionaries of Charity founded by Mother Teresa.

These are not scattered, isolated incidents. They are part of the geography of sharply escalating intolerance towards the minorities and an assault on the idea of a pluralist, secular India.

This attempt to see the minorities as the problem often obscures the real problem — the state of the economy as the pandemic rages.

The two storylines need to be seen together.

What comes across as attempts to deepen fissures and further polarise the public as Assembly elections in key states like Uttar Pradesh draw closer is also doing the job of diverting public attention from the critical issue of jobs and livelihoods.

The Reserve Bank of India says economic recovery is gaining momentum. But fear and uncertainty among ordinary people are hard to miss.

At a tony café in Greater Kailash II, South Delhi, a waiter tells me he is worried. A sense of disturbing déjà vu has enveloped the national capital as it heads towards another lockdown. During earlier lockdowns, the young man did not get his salary. He says he is lucky that he gets one now, unlike so many others working in the hospitality sector who have seen their incomes drop. But old anxieties are back. The waiter is afraid that the café could shut down and he would be without a salary once again.

A therapist in the same neighbourhood looks tense while flashing her customary smile. New restrictions in Delhi mandates that the spa where she works will remain closed in the coming days. She has run out of savings to pay for rent in case she does not get her salary.

Down the road, a migrant worker from Bihar is plying a cycle-cart equipped with a mini cooking gas cylinder. He sells hot tea on bitterly cold days for `10 a cup. He has taken to doing this, alongside his regular job as a part-time domestic helper, to make extra money that will pay for rent and meals in this megacity.

These are real people; these are real concerns even as the Hindutva brigade talks incessantly about Hindus being in danger. The people I spoke to were Hindus. The threat they face is loss of livelihood, not people from another faith.

Here are a few numbers which I collated from publicly-available data and which tell a sorry tale. An online survey conducted by National Small Industries Corporation reveals about nine per cent of micro, small and medium enterprises (MSMEs) have shut shop due to the Covid-19 pandemic. A total of 9,052 self-employed people died by suicide in 2019. That number rose to 11,716 in 2020, according to government data.

It’s no secret that millions of jobs have been lost since the onset of the pandemic and workers who are part of the informal sector, the mainstay of the Indian economy, have been very badly hit. The economy is improving slightly but the better employment numbers mask greater workload and wage insecurity.

In a recent commentary piece, Mahesh Vyas, CEO and MD of the Centre for Monitoring Indian Economy (CMIE), an economic think tank, said: “Headline data on employment in November 2021 is mildly encouraging but the details underlying these are quite disappointing. The encouraging signs are that the unemployment rate declined from 7.8 per cent in October to seven per cent in November; the employment rate rose by a whisker from 37.28 per cent to 37.34 per cent. This translated into employment increasing by 1.4 million, from 400.8 million to 402.1 million in November 2021.”

But here’s the catch. “The first disappointment in the November data is that the labour participation rate (LPR) has slipped. It fell from 40.41 per cent in October to 40.15 per cent in November. This is the second consecutive month of a fall in the LPR. Cumulatively, the LPR has fallen by 0.51 percentage points over October and November 2021,” Mr Vyas noted. The LPR is a marker of how many able and employable people are actually looking for work.

The other worry is that employment is falling faster in urban than in rural areas. Then, as Mr Vyas tells us, there is the fall in salaried jobs and a fall in the count of entrepreneurs in the November data. “Salaried jobs fell by 6.8 million. Entrepreneurs declined by 3.5 million. These were compensated by an 11.2 million increase in employment among daily wage labourers and small traders. This again points to deterioration in the quality of employment. Salaried jobs, at 77.2 million, were 9.7 percent lower in November 2021 than they were in November 2019.”

All this comes at a time of rising food prices, overall high inflation, and the hyper-transmissible coronavirus variant Omicron that could potentially derail economic recovery.

With such pressing challenges, why is the ruling BJP and its supporters keen on stirring the pot, stoking ancient hatreds, and digging up combustible issues? At a time when the country needs to come together, hate speeches are dividing the public. No country struggling with the pandemic, an economic slowdown and millions of poor people without any social safety net can afford to focus on anything else besides the health, lives and livelihoods of its people.

Going into a new year, we, the people of India, must say this. Loudly.