Indranil Banerjie | Can South Asians work as one, herald a better 2022? 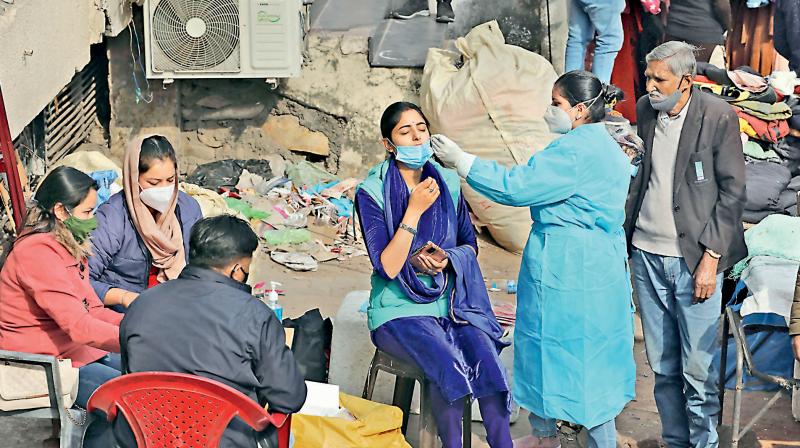 A health worker collects swab sample of a woman for Covid-19 test, in the wake of recent surge in Coronavirus cases. (DC file photo)

Despair was the dominant theme in the South Asian subcontinent during 2021. It was a time of the untamed Covid-19 pandemic, stories of death and tragedy, contracting economies, rising divisiveness, armed conflict and dried-up inspiration. Can we expect 2022 to be any different?

The pointers are mixed and not without any positives. For one, despite the looming spectre of a new Covid-19 strain in the form of the Omicron variant, the pandemic could reasonably be expected to ease further in the new year. The new variants, despite being highly contagious, do not appear to be as lethal as the previous strains.

Responsible behaviour, tight local governmental controls and continued mass vaccination drives could dramatically reduce its impact. This decline can only have a positive impact on all economies in the region. As it is, signs of recovery are apparent in many parts of South Asia.

India by all accounts is leading the revival thanks to its massive public spending on infrastructure, including big-ticket road, railway, port and airport projects. It is an effective policy that hails back to the Depression years in the United States under President Franklin D. Roosevelt. His Works Progress Administration programme led to so much spending on infrastructure that it not only put the American economy back on the rails but also served that country for decades.

All this is, however, overshadowed by rising divisiveness in many parts of the region including in India, where religious intolerance shows no sign of abating. Communal and partisan conflicts are bound to be exacerbated during 2022 due to the major state elections in India as well as the run-up to the general elections in Pakistan and Bangladesh.

Political life in Bangladesh continues to be violent as it approaches the 2023 polls. Local elections in the country’s rural areas during 2021 led to at least 85 poll-related killings, while at the same time the country saw yet another round of brutal communal bloodletting in October where the minority Hindu community was targeted, leading to several deaths and destroyed temples.

Pakistan is more precariously placed. Like Bangladesh, it too will see polls in 2023. Recently, Pakistan Prime Minister Imran Khan’s ruling party was forced to concede defeat in local polls in Khyber Pakhtunkhwa, a province considered his stronghold. This defeat has been widely attributed to his dwindling popularity as voters struggle with soaring prices of goods and job losses.

Pakistan’s decisions to keep fuelling jihad, maintain a huge military and run with China’s Communists are proving disastrous for its finances. Reports suggest that the country’s powerful military is looking for alternatives to Imran Khan, the horse they had once backed, who must be sacrificed now that the IMF won’t bail out Pakistan without stiff conditionalities. The Imran Khan government is already in a minority in the National Assembly and could easily be toppled any time the Army so wishes.

The anti-India card continues to be the mainstay of key political leaders in a number of South Asian nations including Sri Lanka, Nepal and the Maldives. They all have tended to play off China against India. This has led their fortunes into a cul-de-sac from where there are few escape routes.

This is of particular concern because the subcontinent remains one of the most militarised regions in the world, with its impoverished member states spending disproportionate amounts on armaments and combatants.

The principal reason for this is the historical quest of nations such as Pakistan and the region’s mammoth neighbour, China, to alter territorial boundaries and suppress internal sub-nationalities. The result, not surprisingly, has been persistent hostilities that have spiked in recent times, leading to more expenditure on arms and soldiers.

This trend is set to continue through 2022.

Pakistan is headed for hard times and cannot afford state-of-the-art weaponry as in the past and has to rely increasingly on radicalised irregulars. The capability of these groups is limited, but is bound to keep conflict alive in places such as Kashmir and the Afghan border regions.

China, on the other hand, is still on the ascendant, although it has been hit by Western economic retaliation, growing indebtedness and slowed growth.

Despite this, the Communist giant continues to ratchet up its military capabilities and produce advanced weapons systems at almost breakneck speed. It is also building up formidable infrastructure in areas near potential engagement points with India. Further tensions if not conflict with India is inevitable.

The Dragon’s shadow over the subcontinent is going to affect this region in another way. This pertains to those nations that have chosen to rely on Chinese investment to develop their fragile economies. Pakistan and Sri Lanka are two countries who now find they have no money to pay their usurers in China.

While it is common knowledge that Pakistan is broke, less publicised is the dire straits that Sri Lanka finds itself in. In August 2021, Sri Lanka announced a national emergency as it ran short of an astounding $80 billion in state revenues. Overseas investors have pulled out billions from the local stock market while Covid-19 and disastrous government decisions have led to unprecedented economic contraction and plummeting forex reserves. This has caused a historic food crisis in that country.

Countries that have succumbed to China’s infrastructure development offers are bound to find themselves in tough financial circumstances in 2022 and some could even default on debt commitments. This will add to the subcontinent’s collective woes.

The greatest threat to the subcontinent’s well-being, however, comes not from inter-state conflict but from the region’s poisoned ecology. This region, which happens to be the world’s most densely populated, has been devastated by over-farming, over-grazing, water misuse, land degradation, deforestation and every other form of environmental abuse.

Today, in most parts of the region, the air, water and land are dangerously polluted.

Water shortage and shrinking arable areas constitute a huge threat, especially if they are politicised as in Pakistan, where India is being held responsible for diminishing riverine capacities.

The portents, therefore, are mixed. If we continue to harbour ill-will towards our neighbours, fan divisiveness, disregard the realities of the Covid-19 conditions today and poison our environment, then the future will be no different from gloomy 2021.

If, on the other hand, we act as if the people and nations of the South Asian subcontinent are not islands but part of the main, that they share a common destiny, then we can look forward to a radiant 2022, shedding memories of the grey and sullen year that 2021 was.