Opinion   Columnists  30 Dec 2021  Anita Anand | Humanitarian aid to Afghans amidst suffering: Will it be a pipe dream?
Opinion, Columnists

Anita Anand | Humanitarian aid to Afghans amidst suffering: Will it be a pipe dream?

Anita Anand
The writer is a development and communications consultant and the author of Kabul Blogs: My Days in the Life of Afghanistan

Most of the development aid coming into Afghanistan has stopped 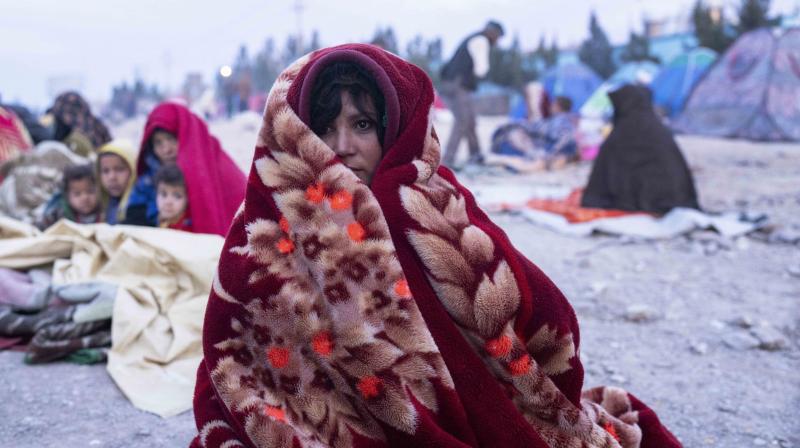 An Afghan woman is wrapped with a blanket as she and her family camp outside the Directorate of Disaster in Herat, Afghanistan. (AP Photo)

In my visits to Kabul over a 12-year period, in the 2000s, the genset in my guesthouse, fuelled by diesel, was on several hours a day, summer and winter. It was turned off at night.

In the winters, I slept by the light of the coal-fed bokhari (stove) in my room. In the winter of 2014, a snow avalanche knocked out the power lines. There was no power in Kabul for five days. Around 70 per cent of Afghanistan’s electricity is supplied by its neighbours -- Uzbekistan, Turkmenistan and Iran.

In this backdrop, just imagine what is happening in Afghanistan now. When the Taliban took over Kabul on August 15, the country stopped, literally. Four months later, most systems have broken down or are severely fractured.

Banks are functioning at a minimum level and people have little or no access to cash. Supplies of everything are running out. Add to this the Covid-19 pandemic, a full-fledged drought as well as unemployment. The government staff are unwilling to go to work and women in all sectors have been told to stay at home.

There is, indeed, a humanitarian crisis in Afghanistan, in every sense of the term. Saving lives, relieving suffering and maintaining human dignity is a tall order.

The central question in most people’s minds is -- Will the relief get to the people who need it?

There are no easy or direct answers. Most of the development aid coming into Afghanistan has stopped. Except for the humanitarian aid which comes through the United Nations system and its agencies, internal cooperation donors and international and regional aid organisations.

Commercial flights are suspended except for those carrying aid supplies. Most emergency aid from Iran, Pakistan, Turkmenistan, Uzbekistan, Tajikistan and Kazakhstan enters by road.

Besides the most immediate and pressing humanitarian crisis it is facing, Afghanistan has been in crisis for four decades. Crises resulting from natural disasters were minimal in this period. However, the conflicts during the occupation by the former Soviet forces from 1979-89 and then by the Northern Alliance and the Taliban till 2002, destroyed institutions and systems.

Since 2004, with the assistance of the international donor community and Afghanistan’s immediate neighbours, vital sectors of the economy have revived -- water, energy, agriculture, livestock, and livelihoods for rural areas, especially for women and youth. The Taliban continued with its terror campaign, deliberately disrupting the nation’s hard-earned gains.

The Afghan economy has been untenable for a while now. About 80 per cent of the former Afghan government’s budget came from international development aid, which stopped after the Taliban takeover in August this year. The overseas accounts of the government were frozen to stop the hardline Islamists from accessing them. This led to a collapse in public finances. Many workers stopped getting their salaries, which extended the pressure on the country’s banking system.

The Taliban have not got the international recognition they want. But humanitarian aid has been offered by countries who don’t recognise the Taliban government. According to Tolo, a media house in Afghanistan, by November Iran, Pakistan, China, Russia, Turkey, Qatar, Uzbekistan, Turkmenistan, Kazakhstan, Kyrgyzstan, Italy and the United Arab Emirates had opened embassies in Afghanistan.

Over 130 countries and organisations met, and countries pledged close to $1.2 billion in assistance and $600 million till the end of December. According to the UN Office for Coordination of Humanitarian Assistance, about $1.6 billion was provided to Afghanistan in 2021. The US has consistently been the largest donor, followed by the European Union, and other EU member countries such as Germany have provided additional funding.

Humanitarian aid is being distributed by UN agencies and international aid organisations, and the distribution of the aid is a challenge -- the sporadic violence, the Taliban’s enforcement of Sharia, the physical challenges of reaching areas snowed in, and aid workers on the ground not being paid due to the collapse of the banking system make it hard to work effectively.

The United Nations Development Programme (UNDP) in Afghanistan estimates that 23 million people are in desperate need of food, the $20 billion economy could shrink by $4 billion or more, and 97 per cent of the 38 million population are at risk of sinking into poverty.

The chances are that in Afghanistan saving lives, relieving suffering and maintaining human dignity will be a pipe dream for now.