Jasim Mohammad
The writer is a professor and the chairman of the Centre for Narendra Modi Studies (CNMS), India, and also a former media adviser, Aligarh Muslim University

The minority population such as Hindus would not be safe under the rule of the Awami League, led by Prime Minister Sheikh Hasina 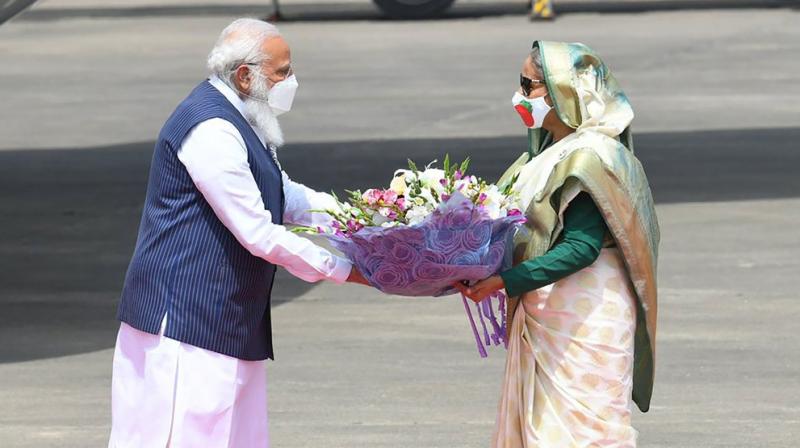 For Prime Minister Modi and for India, Bangladesh is not merely just another neighbouring country. It is a land which he has visited himself and which has an old connection. (Representational image: AP)

Fifty years ago when India was gearing up to wage the Liberation War that would deliver linguistic freedom to hundreds of thousands of Bengalis living in the then East Pakistan, no one would have imagined that the land of Sheikh Mujibur Rahman would one day be polarised by communal flames, that too within decades, to witness one of the most heinous attacks on the religious freedom of Bengali Hindus during the peak of their main festival, the Durga Puja.

The violent attacks on the Durga Puja celebrations as well as on Iskcon temples across Bangladesh recently bear the ominous warning that the country has undergone a obscurantist change as much water has flown in the river Padma. (The Ganga, after flowing into Bangladesh, is known as the Padma.) That the minority population such as Hindus would not be safe under the rule of the Awami League, led by Prime Minister Sheikh Hasina, cannot be a concern only for India, which is the biggest home for the Hindus in the world.

It also throws light on how the rapid radicalisation of Muslims, as had been advocated by a section of the political class, including the ruling dispensation, has turned Bangladesh into a major contributor to the quiet rise of Islamic fundamentalism in the Indian subcontinent, which has borne the brunt of terrorism time and again in the past. Extremist outfits like the Jamaat ul Mujahideen Bangladesh and its dark shadow have made deep inroads into the rural areas of the country to make it a hard-line Islamic state.

This unprecedented development triggered repercussions in India like a wildfire for obvious reasons. The ruling BJP, which brags about championing the cause of Hindutva, lost no opportunity in portraying how vulnerable Hindus have become outside the country, while making the loudest possible outcry globally. It also pointed fingers at the silence of several other Opposition political leaders, including Mamata Banerjee, chief minister of West Bengal, who is known to politically champion the cause of Muslims and is also known as a good friend of Sheikh Hasina.

However, the top leaders of the BJP, including the members of the Union Cabinet, have not been at all vocal on the issue. This is reflected in the muteness of its main faces in the government. Starting from Prime Minister Narendra Modi to Union home minister Amit Shah to external affairs minister Subrahmanyam Jaishankar, all have stayed away from lending their voice to their party’s clamour for justice to the Hindus of Bangladesh. The external affairs ministry, in fact, responded to the situation by just sending out a stern message of concern to Bangladesh at the diplomatic level.

This is perhaps a rare occasion in the past seven years of BJP rule when the party and its government did not appear to be on the same page, at least in public. While many in the party and beyond keep on guessing the reasons for this, bilateral relations, others feel, have emerged as the main obligation for the sake of the country’s long-term interests. To the BJP and the RSS, the nation has always come first and on top above all in the agenda. There is no doubt that Prime Minister Modi and Mr Shah are the products of the same ideology. What they choose to do is, therefore, bound by the government they run.

The pivot of their stand lies in “Azaadi Ka Amrut Mahotsav”, a year-long celebration that has been underway across the country to mark its military victory over Pakistan fifty years ago that led to the birth of Bangladesh on December 16, 1971. It may be noted that Mr Modi himself launched the celebrations in 2020 to uphold and consolidate India’s deep bonds with Bangladesh which, apart from being hit by radicalism, is also being avidly wooed by China for its expansionist dreams.

This year-long event is due to conclude on December 16 this year, when the top political representatives from Bangladesh are also expected to participate. Any critical reaction by the Prime Minister on a specific and untoward issue across the border would have certainly worsened the mood in the run-up to the grand culmination of the celebration in the national capital. Had he broken his silence, it might also have become a point of discord in the long run diplomatically between the two nations, especially after Sheikh Hasina has harshly condemned the communal violence herself, and launched stringent action against the offenders.

For Prime Minister Modi and for India, Bangladesh is not merely just another neighbouring country. It is a land which he has visited himself and which has an old connection politically, economically and culturally with India, above anything. That is why when Hindus came under attack there, the Prime Minister also averted a diplomatic crisis like a statesman by dealing with the situation at the governmental instead of at the party level.