The Congress had to go into the election with Mr Channi as the face of the party, and not Mr Sidhu 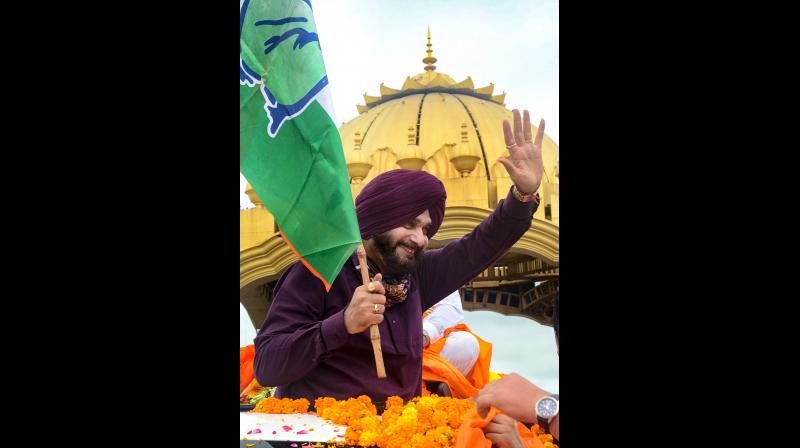 Mr Sidhu is cloaking his ambition in the bid to fight corrupt leaders in the party. (PTI)

The resignation of Navjot Singh Sidhu as chief of the Punjab Pradesh Congress Committee has been written into the changing Congress script in the state that is heading for Assembly elections early next year. When Charanjit Singh Channi was chosen chief minister after Capt. Amarinder Singh stepped down, Mr Sidhu’s position became completely untenable. The Congress had to go into the election with Mr Channi as the face of the party, and not Mr Sidhu. That was not the game plan of Mr Sidhu.

Harish Rawat, the AICC’s central observer for the state, did say half-heartedly that Mr Sidhu would be the face of the campaign in Punjab, but that was not a credible proposition. Mr Sidhu’s stated reasons for the resignation may not be the real ones, but they are credible enough. Mr Sidhu is cloaking his ambition in the bid to fight corrupt leaders in the party. One is reminded of V.P. Singh’s battle against corruption in the Rajiv Gandhi government which served as a pretext for his ambition. Now, one cannot quarrel with ambition in politics, and if it has the veneer of idealism so much the better. Mr Sidhu’s self-projected image of the knight-in-shining-armour did not seem genuine enough to the others in the Congress or outside. But he has shown enough spark and energy, which would have been handy in the election campaign. Mr Channi remains a dark horse in the same way that John Major, who succeeded Margaret Thatcher, was in Britain before his electoral victory in 1992. The possibilities are up in the air.

Mr Sidhu might have been miffed with Mr Channi taking over as the chief minister, but he thought he could still wield enough power to shape the government and the party. If he is to lead the party into the election, it was necessary that he be in control of the levers of power. Mr Channi did not refuse to remain Mr Sidhu’s lieutenant. He was forced to turn to the high command to get the members of his Cabinet cleared.

Again, the parallel with the BJP chief ministers in Karnataka and Gujarat remains instructive. Basavaraj Bommai of Karnataka and Bhupendra Patel of Gujarat had to rush to New Delhi to get their Cabinet lists cleared.

The party high command and Mr Channi had to draw up the Cabinet list which included some of the members of Capt. Singh’s team and some from Mr Sidhu’s group. It was inevitable that the Congress had to choose Cabinet members from different factions in the party. It was necessary to prevent Capt. Singh walking away from the party with his followers. And after Mr Sidhu’s resignation, it will be necessary to hold back many of Mr Sidhu’s followers despite Ms Razia Sultana’s resignation from the government. But generally, there is never a mass migration even when a popular factional leader leaves.

The developments in Punjab have been used by critics to point yet again to the erratic leadership and absolute power of Sonia Gandhi, Rahul Gandhi and Priyanka Gandhi Vadra over the Congress. The fact is that the Gandhis are buffeted on all sides by the many feuding factions, and all that they are trying to do is to engage in reconciling the warring groups, whether it is in Punjab, in Rajasthan or in Chhattisgarh.

And it shows that they are not really in command of the situation. Capt.  Singh and Mr Sidhu are making demands on them, as much as Ashok Gehlot and Sachin Pilot and their followers in Rajasthan. It is the unenviable task of the Gandhis to keep them together and it is proving to be difficult. The Congress leaders are no puppets and the Gandhis cannot pull the strings as they want. The Congress storm in Punjab is not of the making of the Gandhis. They were pulled into it. It appears that the Gandhis have used Mr Sidhu to deal with Capt. Singh, and now that the job has been accomplished, they can ignore him. This is the pattern of the situation that is unfolding. The real situation is that they were unable to control Capt. Singh, and when Mr Sidhu was willing enough to challenge Capt. Singh, they roped him in. But it was impossible to form a Cabinet with only Sidhu followers.

The Gandhis can always plead compulsion and the absolute necessity to accommodate different factions when they need to replace leaders as well as to maintain the balance of power between the factions. They had to perforce lose out on Jyotiraditya Scindia, Jitendra Prasada, Sushmita Dev and Luizinho Faleiro as it becomes difficult to meet everyone’s legitimate demands. The Congress then is a raucous and divided party.

It survives because attempts are made to keep the cantankerous brood together. And the Gandhis are forever firefighting one crisis after another. Anyone challenging the Gandhis for the leadership of the party must prove that he or she enjoys the trust of all the factions. That is why the Gandhis manage to survive. The party flounders but retains its tenuous and battered unity. The entry of Kanhaiya Kumar and Jignesh Mewani into the Congress is an attempt to keep the party afloat in other ways, and these youngsters make the Congress story more complicated. The Congress is indeed a functional anarchy just like the country is, and that is where the value of the party lies despite its follies and blunders.