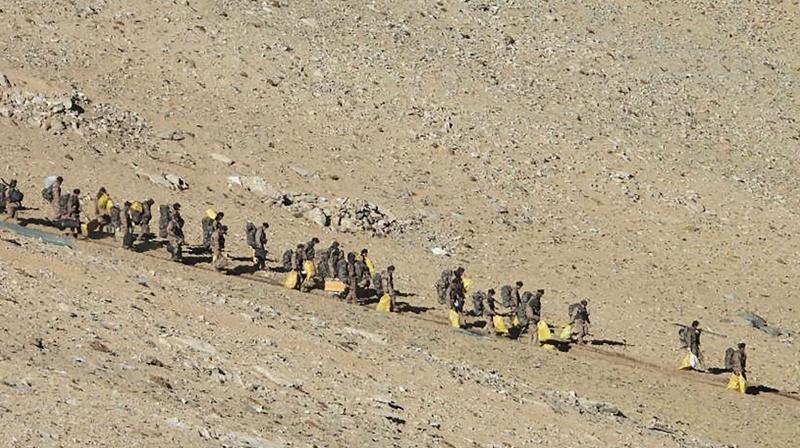 Apart from an intensive drive for PLA recruitment, the “stability” of the borders seems to be the Chinese leadership’s main worry. Representational Image. (AFP)

China wants us to believe that it liberated Tibet 70 years ago. It didn’t really happen like that. It’s true that on May 23, 1951, Tibet and China signed an “Agreement on Measures for the Peaceful Liberation of Tibet”, also known as the 17-Point Agreement; but it sealed the invasion of Tibet, not its “liberation”.

In his memoirs, the Dalai Lama said the agreement was forced “under duress” on the Tibetan delegates, and even the seals on the agreement had been forged. When he crossed the Indian border in March 1959 and reached Tezpur in Assam, the Tibetan leader immediately denounced the accord.

Strangely, the Communist Party of China decided to commemorate the May 23 event in August. No one knows why the so-called liberation wasn’t celebrated May 23 or even when “core leader” Xi Jinping visited Tibet in July. Was Beijing nervous about the border situation in Ladakh in May?

On August 19, a high-level Beijing delegation led by Wang Yang, head of the Chinese People’s Political Consultative Conference and member of the politburo standing committee, landed in Lhasa to attend the 70th anniversary functions. Mr Wang is fourth in the Communist pantheon.

Besides several officials of the United Front Work Department, which deals with minorities (and Tibet in particular), including its minister, You Quan, and a handful of hardcore Tibetan Communists, Mr Wang was accompanied by Adm. Miao Hua, member of the Central Military Commission (CMC) and director of the CMC political work department.

Though very few commentators noticed the admiral’s presence, it was certainly a first for landlocked Tibet to see the white uniform of a three-star admiral. Later, Adm. Miao, accompanied by Lt. Gen. Zhang Xuejie, the powerful political commissar of the Tibet Military District (TMD), went by a fast train to the remote, cold, deserted high-altitude region of Nagchu. Adm. Miao had probably come to the Roof of the World for “political work” and to follow up on his colleague Gen. Zhang Youxia’s “border” discussions with the TMD during President Xi’s visit in July.

What is really cooking on the Roof of the World?

Apart from an intensive drive for PLA recruitment, the “stability” of the borders seems to be the Chinese leadership’s main worry. In his speech from Potala Square, Mr Wang said: “At present, the social situation in Tibet is harmonious and stable, the quality of development is constantly improved, people’s living standards are comprehensively raised, the ecological  security barrier is increasingly solid, ethnic and religion aspects are harmonious, the frontier is consolidated, and the border is safe, the Party’s construction is comprehensively strengthened, and the new socialist Tibet is vibrantly alive.” It could all be wishful thinking.

Besides the construction of 605 “moderately well-off” villages on India’s borders, another way to stabilise the border is inter-marriage between Hans and Tibetans. Over the past 70 years, this has been rare: Tibetans have always been reluctant to lose their “Tibetanness”. This seems to be changing.

In March 1955, in a report to the external affairs ministry, Apa Pant, the political officer in Sikkim, said people in the Chumbi Valley near Sikkim were taken in by Chinese efforts to win over Tibetans; and he mentioned inter-marriages. “One of the aspects of the policy of establishing a closer bond between Tibet and China is the great encouragement, even at times through a great deal of propaganda, that is being given to Sino-Tibetan marriages,” he wrote, saying many Tibetans feared the Chinese would marry the most eligible Tibetan girls “and produce a new generation of Sino-Tibetans who will have deeper emotional feelings towards China.” However, this type of inter-marriage practically stopped after the Dalai Lama took refuge in India in 1959.

The situation has changed, as an article in China Daily puts it: “Han-Tibetan couples reflect the region’s love of unity”. The newspaper published several quotes attributed to Xi Jinping during his interaction with local officials in Tibet in July: “The border area is the first line of defence and the barrier for national security. We must strengthen the construction of border infrastructure, encourage people of all ethnic groups to take root at the border, protect the country or build their hometown.”

The Chinese paper noted: “Official statistics showed that more than 40 ethnic minorities live in the Tibet Autonomous Region, and Tibetan inhabitants account for over 90 per cent of the 3.64 million population. Nowadays, families consisting of members of different ethnic backgrounds are quite common in Tibet.”
Whether it’s true or not is difficult to say.

The party’s newspaper cites the example of four couples, their Han-Tibetan inter-marriage being “a great demonstration of ethnic unity in this new era of development”.

Is it State policy to be implemented before the next Tibet Work Forum in 2025? These decisions (like compulsory conscription of Tibetans in the PLA) usually remain secret till they are fully implemented.

A few months ago, Xinhua had touched upon the issue: “According to statistics, there are more than 560 multi-ethnic families in Metok [near Upper Siang of Arunachal Pradesh]. People of different ethnic groups help each other in farming and animal husbandry, and children of different ethnic groups study in the same classroom. People here celebrate New Year’s Day, the Lunar New Year, Tibetan New Year or folk culture festivals of the Monpa ethnic group.”

The official news agency highlighted the case of Zhang Chunhuan and his family celebrating together the Chinese New Year: “Eight years ago, Zhang Chunhuan, a young man from Shanxi Province, came to Metok. At that time, the traffic in the county located at the southern foot of the Himalayas was inconvenient. Zhang had to walk three-four hours from some townships to the county seat to buy daily necessities. He never planned to make his home here one day,” recalled Zhang.

These are obviously model cases to be emulated by many more Tibetans: Beijing calculated if thousands of Tibetan girls marry Chinese migrants (for example, those coming to work on mega infrastructure development projects at the border), a page will be turned forever, with no chance for Tibet to again become Tibet in the future.

Both New Delhi and the Tibetan government-in-exile in Dharamsala must take up this issue seriously, otherwise border populations across North India will soon have to face new neighbours, with all the consequences it implies.

This, along more intensive Tibetan recruitment in the PLA, the means to “stabilise” the border was certainly discussed by Adm. Miao Hua with the TMD generals.