Nitish rejoining BJP is not a betrayal

The Congress and the RJD maintain that by joining the BJP, Nitish has betrayed the mandate of the 2015 elections. 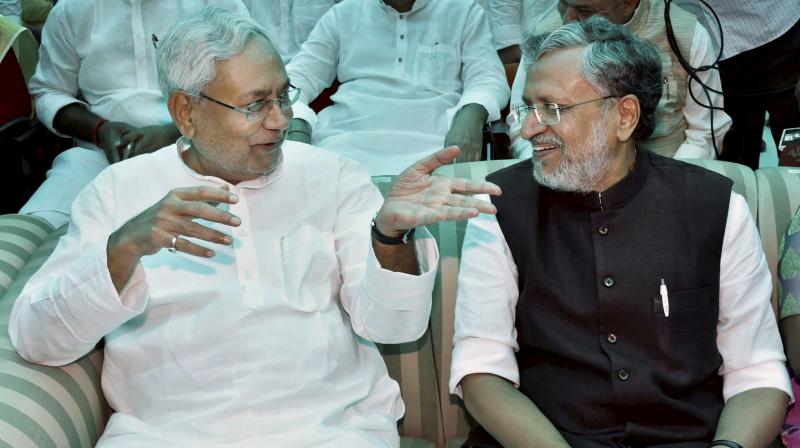 In the context of the tectonic changes that have taken place in Bihar over the last few days, Nitish Kumar has been accused of “betrayal” and “treachery” by the Congress, the Rashtriya Janata Dal (RJD) and some other political parties. It has been said that he betrayed the mandate for the Mahagathbandhan received in 2015, and by joining hands with the BJP, he has displayed “opportunism” in the pursuit of power. The time has come to set the record straight with regard to such allegations.

I recall the function on February 10, 2017, at the Nehru Memorial Museum & Library for the launch of P. Chidambaram’s book where Nitish was among the speakers. From the podium he made a direct appeal for Opposition unity in an organised and cohesive manner. He said that the question of who would lead the Opposition coalition should not be the obstacle. Rahul Gandhi — along with Manmohan Singh — was sitting in the front row, and Nitish pointed to him and said that he could take the lead. The offer was made publicly and in good faith, but when the function ended, without waiting to even exchange a word with Nitish, Rahul had walked out with his entourage in tow.

Subsequently, on more than one occasion, Nitish stressed that to build Opposition unity it was necessary to craft a credible narrative with an alternative vision of India, and that this project could not be reduced to a slogan, or invoked only on sporadic contingent issues, without the requisite investment of effort and application of mind. His repeated pleas fell on deaf ears, and certainly there was no initiative of any worth from the Congress.

It is important to remember that in pursuit of such a goal, Nitish dispensed with personal ego. In 2015, when there was a move to unite the erstwhile Samajwadi parivar, he gave a carte blanche to Mulayam Singh Yadav, to lead such a formation, and was even willing to accept the party symbol of the Samajwadi Party. But the very party, which would have been the benefactor of his generosity, subverted even this project. In fact, in the 2015 Bihar elections, the SP put up candidates against the JD(U).

While the Mahagathbandhan won decisively in 2015, an avalanche of information began to come out in the public realm in the last few months with regard to the benami properties of Lalu Prasad Yadav and family, acquired through obvious misuse of office. It is well known that Nitish has always had a policy of zero tolerance to corruption and has placed great emphasis on the need for probity in public life. Even so, he did not, contrary to the manner in which he acted against delinquent member of his own party, ask for Tejashwi Yadav to resign. All he asked was that Tejashwi should provide a public rebuttal on a point-by-point and factual basis to the allegations listed in the FIR against him. This was essential for the image of the Mahagathbandhan.

This plea too fell on deaf ears. Instead of heeding what the chief minister was saying, the RJD launched an aggressive personalised attack on him. Secularism was invoked as a counter to the charges of corruption, as though secularism is a cloak you can wear whenever there is a need to hide personal misdeeds. In his speech in the Bihar Assembly on July 28, when he proved his claim to legislative majority, Nitish made the telling comment that no one needs to teach him a lesson about secularism. It is instructive to remember that — in stark contrast to those who use Muslims only as an expedient vote bank — Nitish, as CM of an NDA government, did far more for the welfare of Muslims in Bihar than in 15 years of Lalu’s government.

There was reason, therefore, for Nitish to be both angered — and hurt — by the baseless allegations of the RJD. Even so, he did not give up his efforts to save the coalition. He met with Lalu and with Tejashwi. He also appealed to the Congress — the third constituent of the grand coalition — to intervene. Only a few days ago, he had a meeting with Rahul in Delhi in this regard. Unfortunately, there was not a single statement by the Congress in support of Nitish’s reasoned stand against corruption.

It is in this background that Nitish has joined hands with the BJP. It must be remembered that the JD(U) and the BJP were partners in the NDA for 17 years in the past. In fact, Nitish became the CM for the first time in Bihar in 2005 in partnership with the BJP. In the eight years that he ran Bihar with the BJP, with Sushil Modi as his deputy CM, the state saw a revolutionary transformation. That team is back again, and for the first time after 1990 Bihar will see the same party at the Centre as in the state.

This will no doubt be in the interest of the people of Bihar. After submitting his resignation on July 26, Nitish said that he had taken this decision squarely keeping in mind the good of Bihar. Frankly, given the obduracy of the RJD, governance had come to a near standstill in Bihar. For a man like Nitish, who is known as “Sushasan Babu”, this was an unacceptable situation. All his schemes for inclusive growth, specially to benefit the extremely backward and the mahadalits, were being delayed, and corruption unleashed by the RJD, had reached unacceptable proportions.

One final point needs to be made. The Congress and the RJD maintain that by joining the BJP, Nitish has betrayed the mandate of the 2015 elections. To this there can be only one answer: the mandate of 2015 was for good governance and the development of Bihar, not for the brazen condoning of corruption for the benefit of one family. And, if joining the BJP now is a “betrayal” of that mandate, why did the Congress and the RJD provide support to the JD(U) in 2013 — after Nitish broke with the BJP — when he had won the 2010 elections with a massive mandate with the BJP as his partner?

The RJD, the Congress and other critics need to bear these facts in mind, and look at themselves closely in the mirror. They will then see an entirely different picture emerging.