In 2020, a military confrontation may not materialise, but the Chinese have evidently prepared for one over a long period 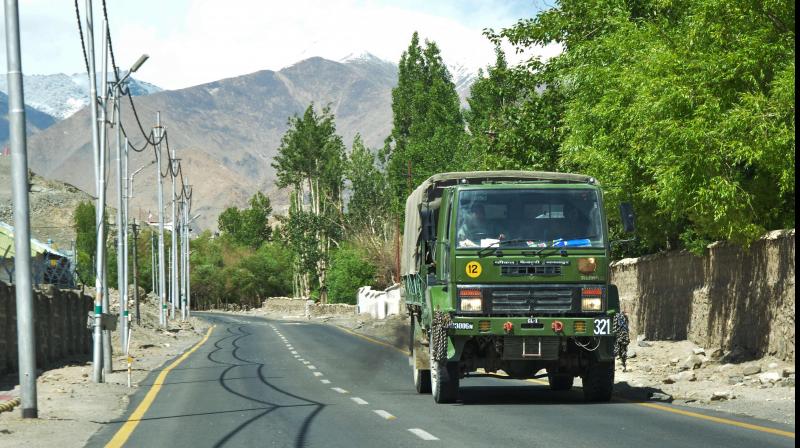 An Indian army truck drives along a road in Leh. AP Photo

There is a fundamental similarity between the border situation with China under Prime Minister Narendra Modi now, and the one during the tenure of the country’s first leader, Jawaharlal Nehru, leading eventually to the month-long clash in 1962 in which Indian forces were routed, though they showed determination in icy conditions, and rare courage.

But there is also a major fundamental difference that highlights leadership qualities in one case and not the other, that privileges the idea of not shirking the responsibility of advancing the country’s claims even in the face of a military reverse, as Nehru showed. For China, this never ceased to be a matter of anxiety, despite its formidable military capability.

Here is the principal similarity between then and now. In 1962, in the western (Ladakh) sector and the eastern (NEFA) sector, China presented a vast array of forces and an assemblage of armaments long before battle was joined, taking us by surprise.

In 2020, a military confrontation may not materialise, but the Chinese have evidently prepared for one over a long period, catching the Indian side wholly unawares.

Unlike 60 years ago we now have satellite imagery, enough fighting forces on the ground, and infrastructure and logistics right up to the Line of Actual Control, in addition to functioning airfields and suitable aircraft all across the Chinese front. But none of this removed the factor of surprise.

In sum, despite the continual and rapid buildup of our preparedness, especially over the last 15 years, we were not prepared. We were found wanting when the crunch came.

We were presented with a fait accompli, with China’s People’s Liberation Army crossing our front yard and knocking on our door in the Galwan Valley, the north bank of Pangong Lake, and apparently yet again in Depsang, from where we had compelled them to vacate in 2013.

These locations of Chinese penetration prejudice our security inordinately and in a deeply disturbing way in that, if the PLA were to have its way, our base at Daultat Beg Oldie, practically the northeastern-most tip of the former J&K state (now in Ladakh UT) still under our jurisdiction, can be cut off and be severely compromised.

This base affords us the geographical lookout to the Karakoram Pass to the east, and to the west to Gilgit (through which China’s vital road to Gwadar port crosses) and is in close proximity to the Siachen Glacier.

A key factor that lends great strategic value to this area is that it is one region where the military forces of China can physically unite with Pakistan’s against India.

Although the facts aren’t entirely clear due to the government keeping a tight lid on them, it is hard to believe reporting on China’s military buildup in Ladakh (and elsewhere) by our intelligence and military system will have failed in its entirety -- to such a degree that the higher military command and political masters in Delhi won’t get a whiff of it (as evidently happened in the case of Kargil, when the Pakistanis penetrated fairly deep without New Delhi knowing).

To effectively prepare for the worst case scenario, and to maximise our state of security readiness, it’s critical to keep asking the right questions and task independent experts without losing time to present a report to Parliament within a tight timeframe, in weeks, not months, since time is of the essence as there is a long summer ahead, which may be ideal to initiate hostilities from the Chinese end, or conceivably our own.

In case of a confrontation with a foreign power, the country will stand four square behind our armed forces and the government, but to give confidence to the country the government must give the people transparency – which does not mean disclosing operational secrets.

Prime Minister Modi can take a leaf out of Prime Minister Nehru’s book in this regard, and in stating this country’s position upfront, as Nehru did in his continual communication with Chinese PM Zhou Enlai before, during and after China’s invasion across our frontier in 1962. Now it is quite apparent that Mr Modi failed to broach the border question with Chinese President Xi Jinping in any substantive fashion in his numerous meetings with Mr Xi.

The two so-called “informal summits” (Wuhan and Mamallapuram), after the 2017 Doklam crisis, had been proposed by the Indian side but evidently turned out to be wasted opportunities. As a country, we need to know what their purpose was, besides being photo-ops to build the two leaders’ image.

In spectacular contrast -- and this is the real difference between 1962 and now -- Nehru maintained strategic communication, detailing points of India’s core security interests, not only with the adversary but also with the people of India. He came under sharp criticism by leading political figures, including in his own Congress Party, and yet held a week-long session of Parliament while the disastrous military conflict in the Himalayas was still on. More than 150 MPs participated in the debate.

Nehru presented white papers to Parliament in this period on India’s and China’s actions, and on November 14 a resolution was passed, reaffirming India’s claim to Aksai Chin. Nehru accepted the Colombo Proposals of early 1963 -- for the two armies to withdraw 20 km and to fill the gap with civilians (police) -- only after India’s position on territory was lodged with China yet again.

In his June 19 meeting with the Opposition parties, Mr Modi stated --whether he knowingly dissembled or not is not clear -- that Chinese forces had not entered the Indian side. He was not upfront with the country. Beijing took advantage of his statement and immediately made an official claim to the Galwan Valley.

It must be clearly understood by the country -- not just the government --that the 1962 debacle was due to a severe troops’ shortage, with the Indians being outmanned one to five, a serious equipment shortage, and absence of supply lines in the high mountainous terrain. These do not hold good now.