Aakar Patel | Mr PM, ignoring China’s intrusion is the opposite of ‘nationalism’ 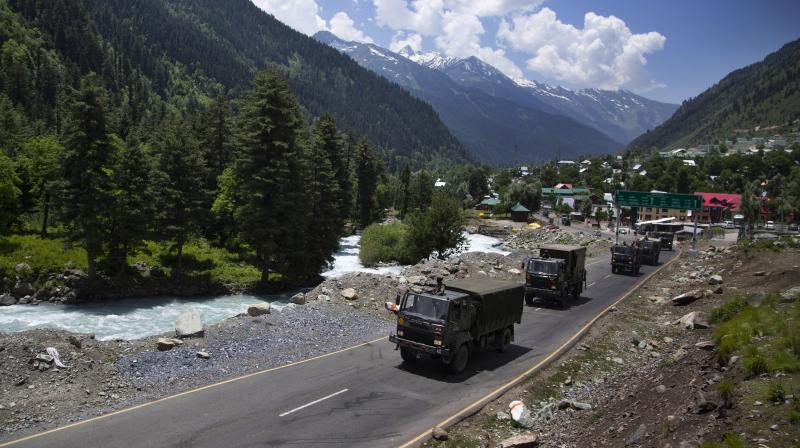 An Indian army convoy moves on the Srinagar- Ladakh highway at Gagangeer, northeast of Srinagar

Even the critics of Narendra Modi and his party have been taken aback by his position on China’s intrusions. Of all the things that he has advertised himself, even Modi haters had accepted that he was a nationalist, whether or not they agreed with nationalism or the kind of ultra-nationalism that he promotes.

But nobody expected him to run away from an invasion of Bharat Mata, as he has done. Modi made only one public statement on the issue of China and that was to say: “Na koi wahan hamari seema mein ghus aaya hai, na hi koi ghusa hua hai, na hi hamari koi post kisi dusre ke kabze mein hain.”

This was used by China to claim control over all of the Galwan Valley, where it has intruded.

The PM's words have become such an embarrassment that they were removed from the official PMO video.

Modi hasn’t spoken on the issue after this and seems to pretend that there is no intrusion. Satellite imagery confirms that the tent our men died trying to remove has now become a series of Chinese structures on our side.

Reports, which haven’t been denied by the government, claim China has made a fourth intrusion at Depsang, where it is 18 km inside India. Our response is so muted as to be shocking. Everyone in the government seems to be worried, and there was a long statement from the External Affairs ministry and an interview with the Indian ambassador in Beijing asking China to respect the Line of Actual Control.

But at the same time nobody is saying China has intruded, because they fear contradicting Modi.
The defence ministry has said anonymously to reporters that the Army has been given a free hand. But that doesn’t mean anything.

The Army cannot decide whether or not we are at war with China. This is a political decision. It is the PM who must decide that India will use force to kick the Chinese out, like Nehru decided, and only after that does the military come into the picture.

Saying that the forces have a free hand in this situation is an abdication of duty and responsibility and passing off political accountability to the armed forces.

The government is treating this as a localised policing issue, but clearly the intent of the Chinese is strategic. India is facing danger, but the government is not prepared or willing to acknowledge it.

Because we are speaking in so many different voices, we have lost the opportunity to mobilise international support on China’s aggression. If we had been transparent about the aggression, we could have put Xi Jinping on the backfoot.
Instead, what has happened is that China has publicly used Modi’s statement about no intrusion and not only blamed India for the standoff but expanded its claim over our land.

Narendra Modi’s very vocal backers have gone silent on this because even they have been taken aback by the incompetence with which this is being handled. And to go back to where we started, on an issue on which nobody thought Modi would be soft.

After all the brave words from him when the UPA was in power with respect to China’s temporary intrusions, to have him waffle and dissemble when they are making the intrusion permanent is unexpected.

What does that say about his nationalism? We can call it pseudo-nationalism. It is fake. The dictionary defines nationalism as a patriotic feeling, and extreme devotion to one’s nation. It is an ideology that promotes sovereignty and resists foreign influence.

What we are seeing unfolding in Ladakh is the opposite of that. It is pseudo-nationalism of the sort that only talks big and attacks its own citizens while cowering in the presence of the foreign bully. It is surprising to me that being as politically smart as he is, Modi does not grasp the value of resistance here.

It does not matter if we are a poorer, smaller and less powerful nation than China. We cannot be pushed around without resistance as is now happening. The bully wants the victim to not look him in the eye. It makes pushing them around easier.

Modi must realise the value of our unity at this time. Even those who do not like him (“Modi haters”) will rally to his call if he says that the country’s sovereignty is being threatened by China’s aggressive intrusions.

The other political fights that we have in our democracy will be put aside and can wait till we see off this immediate and external threat.
Rallying and bringing us together is the responsibility of the government and of the Prime Minister.

He has chosen instead to side with the opponent and agree that there is no aggression.

Whatever else we can call his behaviour at this crucial time it cannot be called nationalism.