Opinion   Columnists  30 May 2021  Shreya Sen-Handley | Back to ‘the future’, with a ticket to ride
Opinion, Columnists

Shreya Sen-Handley | Back to ‘the future’, with a ticket to ride

This pandemic has opened my eyes to what’s essential in my life; that which provides long-term joy over short-lived superficial pleasure 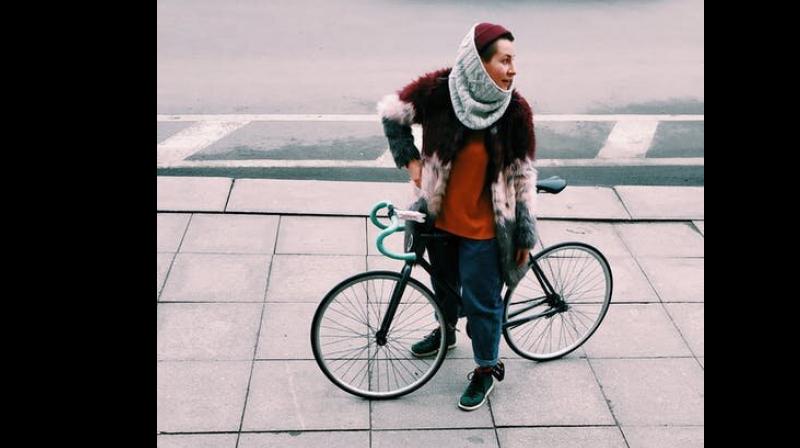 On solo commutes, we should cycle everywhere we can, switching to green public transport where cycling might be hazardous, with the occasional use of an electric car when transporting the whole clan. (By arrangement)

How often have we said to each other these past pandemic months that we can’t wait to ‘go back’ to how it was? Back to socially-undistanced work and schools. Back to favourite haunts. Back to ‘normal’!

But back to the future?

In this film series which celebrated its 35th anniversary last year at the start of the coronavirus crisis, Marty McFly goes back in time, stopping off in different eras, to fix the future. ‘Roads?’ Doc reminds him, ‘Where we're going, we don't need roads’. This is scarily true today because a) we don’t get out of the house anymore, b) if we don’t survive this, what use are roads, c) but if we do outlive this devastating pandemic, we need to think about a future where we use them less, especially in gas-guzzling vehicles. Dispensing at the same time with a lot else besides.

An uncomfortable thought, but consider that not just Back to the Future, many sci-fi stories with their visions of dystopian futures are coming true right now. If we survive this horror and don’t want it repeated, we would need to commit to the kind of lifestyle changes climate activists have been shouting themselves hoarse about for decades.

So, we’re not wrong when, in talking about the future these excruciating months, we’ve obsessed about ‘going back’. But this oxymoronic future we’re dreaming of, simultaneously advancement and return, can never be the ‘normal’ of our recent past.

An article in the New York Times this month, about a gaping hole in the middle of an English city, Nottingham, revealed that people have already cottoned on. A big, ugly 1970s mall at its heart was demolished a couple of years ago to make room for a shiny, new one. Then the pandemic came along and the plan was first parked and later, abandoned. Because a consultation with its citizens in the meantime had led to the surprising verdict that instead of malls, they desired parks and heritage preservation. Fitting, as Nottingham of Robin Hood fame was once mostly Sherwood Forest, but a turnup for the books nevertheless when after a hundred years of avid consumerism, a modern urban hub wants to step off the conveyor belt of fast-paced city living, and lead a quieter life.

Can we hope for this in India where there’s a burgeoning young population constantly bombarded with ads, the lure of malls, and ‘status’ conferring products? In not agreeing to carbon-cutting measures that are sorely needed for environmental regeneration at the recent climate summit, the Indian government appears to have answered that. But that’s the government, not the people. The Indian people, more than any other, have tragically felt the wrath of an injured planet in the last months, and will surely disagree with their government’s reactionary stance, which, in the short-term growth interests of a few, neglects the long-term needs of all its citizens, who require a healthy earth to live on.

The lives we led globally before the pandemic might have felt ‘normal’, but evidence of ever-accelerating environmental degradation proves it wasn’t ‘natural’ at all. And the consequences are hitting home, with this killer virus only the start. Like most 21st century people, I like my modern comforts, but it’s becoming uncomfortably clear that we must realign with nature; making a significant, yet sensible, leap into the past.

How about we try the Konmari method of decluttering; discarding habits that no longer “spark joy”? This pandemic has opened my eyes to what’s essential in my life; that which provides long-term joy over short-lived superficial pleasure. Unexpectedly diagnosed with diabetes last month, choosing a leaner, closer-to-nature lifestyle has been a no-brainer. Yet, in the mess we’re in, with urgent action required to reverse it, isn’t it the way forward for everyone? But if the way forward is a going back, is it the early 20th century we must return to? The pre-industrialised 18th, or the Dark Ages perhaps?!

I fancy we could get away with a pick-and-mix approach. What could be better than picking the healthiest habits from every epoch? We’ve never been better-placed to do that than now, with so much hindsight at our disposal, and so much time! Nor do we have to adopt an alien culture or travel far to see how life can be lived in tune with nature. Just visit your nearest gram (but not Gurugram!).

To pick and mix would mean we won’t have to fully subscribe to any one philosophy, era, or lifestyle. We don’t have to go full-on Amish; doing without electricity, or wearing potato sacks. We just need to choose the smartest, greenest ways of life that history has had to offer. We can, as we did so comfortably in the past, opt for sustainable fashion (aka upcycling and hand-me-downs) and grow some of our own food. Or ally the best of pre-automotive living with a solution from more recent times — the electric car. On solo commutes, we should cycle everywhere we can, switching to green public transport where cycling might be hazardous, with the occasional use of an electric car when transporting the whole clan. Good for the planet and healthy for peeps, cycling is also the height of romance! We may once again ride through a quiet lane blossoming with birdsong, with unpolluted wind in our hair like Gregory Peck or Madhubala!

This going back to move forward, advancing to backtrack, may be confusing, even unnerving, but just the ticket for our return to calm. To paraphrase Marty McFly, “You guys may not feel ready for that yet, but your kids are gonna love it!”