Didi sets the ball rolling, but road ahead is tough

The PM will do no good to his chances of securing another term by imagining the developments to be just an one-act skit of the overambitious. 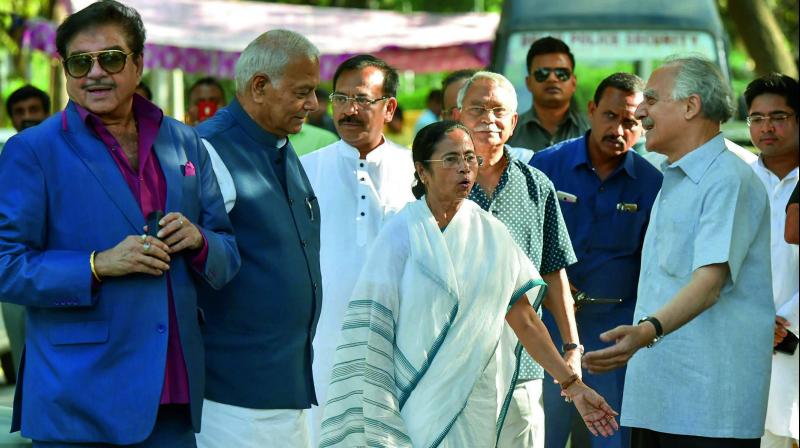 In recent weeks, the Opposition parties, due to a series of developments and proactive steps, have snatched the advantage of “first mover” from Prime Minister Narendra Modi and the ruling BJP. The position of superiority that Mr Modi enjoyed in 2014 stemmed from presenting early the “new” and “promissory”. Trinamul Congress supremo Mamata Banerjee’s initiative, her meetings with various Opposition stalwarts — including dissident BJP leaders — may not yet display the possibility of a “national alternative” to Mr Modi, but the proposal holds the potential of ousting the BJP. The Prime Minister will do no good to his chances of securing another term by imagining the developments to be just an one-act skit of the overambitious.

Ms Banerjee’s 1:1 formula is a rather catchy way of representing an old argument. Back in 1977, when Indira Gandhi called for elections while the Emergency was still in force, she was confident that a fragmented Opposition would be no match. Yet the sentiment of anti-Congressism proved such a potent adhesive that parties sank their differences and made seat adjustments before formally merging into the Janata Party. Of the 154 seats the Congress won, it touched double-digits only in seven states — Andhra Pradesh, Assam, Gujarat, Karnataka, Kerala, Maharashtra and Tamil Nadu. These states accounted for 132 of the Congress tally. The party drew a blank in Bihar, Haryana, Himachal Pradesh, Punjab and Uttar Pradesh — where it was the primary political force in previous polls. In Madhya Pradesh and Rajasthan, the Congress won just one seat each. In the 1971 election, when the Congress secured 352 seats, its tally from these states was 168. Indisputably, Indira Gandhi’s rout stemmed from losses in her bastion — she even lost her own seat in Rae Bareli. The defeat was not just due to anger over the Emergency “excesses” but also because the anti-Congress vote did not split. Much before the concept of an Index of Opposition Unity was theorised, a high score on this scale was the reason for the debacle. All anti-Congress parties contested on the symbol of Charan Singh’s Bharatiya Lok Dal and in states like Punjab, forged alliances with the regional players.

More than a decade later, the second time the Congress — now under Rajiv Gandhi — was ousted was in 1989, when it won just 197 seats. This was principally due to poor performances in Bihar, Gujarat, Haryana, MP, Maharashtra, UP and Rajasthan, and mainly due to the alliance between the Janata Dal, the BJP and in some states with other parties. Losses for the Congress would have been higher had the BJP and JD cut out “friendly contests” in MP, Maharashtra, Rajasthan and UP.

Ms Banerjee’s 1:1 proposition is therefore workable — as evidenced in the recent byelections in Gorakhpur and Phulpur — and possibly necessary. However, because the political terrain has altered since the advent of the coalition era, the arithmetic values in the political equation have to be reassigned.

First, the Congress is no longer the principal pole and Opposition unity now has to be built against the BJP. The 1999 election marked this transition, and although the BJP lost in 2004, it remained the fulcrum around which political sentiment mobilised, in favour or against. While previously parties justified “unholy” alliances to keep “authoritarian forces” out of power, after 1999 it was to keep “communal forces” at bay. The pre-poll alliances that the Congress struck played a crucial role in the BJP’s defeat in 2004. Since then, the Congress has stayed with alliances and utterances at the recent plenary showed its realisation of the need to be more accommodative if Mr Modi is to be stopped. The moot point is the extent of the accommodation it will be willing to do, and how this would calibrate the party’s revival. Much will depend on whether the Congress leaders are driven by the spirit of overnight returns to a pivotal position or view it as a long-drawn process.

In 1996, when the Congress was in office, the party fielded 529 candidates with an alliance only in Tamil Nadu. The number of candidates it put up subsequently declined — 477 (1998), 453 (1999), 417 (2004). Once it came to power in 2004, its ambition soared and in 2009 and 2014 it put up 440 and 464 candidates, indicating reduced space for allies. For Ms Banerjee’s formula to get accepted nationally, and not remaining limited to states where the Congress is not in direct contest with the BJP or is a dominant non-BJP party, magnanimity will have to be displayed by the satraps as well as the Congress top brass. For instance, unless the West Bengal chief minister is willing to allocate parts of her political territory to the Congress, and perhaps even the Left, and in response it is willing to accept its limited strength and not hanker for too many seats as the Congress has often done in UP earlier, her proposition will remain confined to theatrics for the media.

Pragmatism must be the principle if a cohesive Opposition platform is to unitedly take on the BJP. Soon parties have to also discuss formalising the platform, give it a name and hammer out a joint statement of objectives. This will become crucial in the event of a hung verdict and to prevent the BJP securing Rashtrapati Bhavan’s call to get first shot at governance — like in 1996 — simply because it emerges as the single largest party. A pre-poll pact involving as many parties as possible is obligatory to ensure the mandate is respected in the event of significant reduction in the BJP’s tally. The Opposition’s best chance is to prevent Mr Modi from converting the polls into a “wave election”, ensuring it remains one whose outcome is decided by state aggregations. Wisely, Ms Banerjee is not yet falling into the BJP’s trap of naming a “face” — doing this would mean contesting the BJP on its turf. A beginning has been made, but much work remains to ensure that 2019 is a keen contest and not a preordained as in 2014.