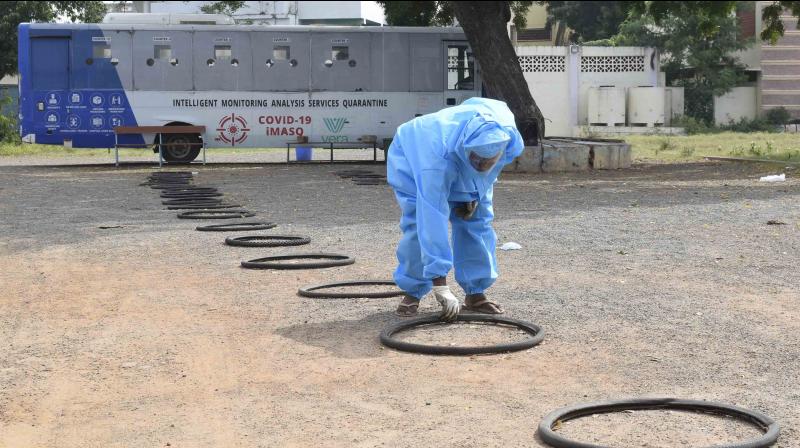 Big calamities induce great change. The Fukushima disaster 2011 in Japan left behind 16,000 dead and the haunting image of the Emperor Akihito, kneeling before aged victims– a never before, mutely humane gesture expressing remorse and reassurance.

April 2020, India. A possible 10 million emigrant workers abandon locked down cities. Some walk to distant villages with their family in tow and their meagre possessions on their heads — a replay of the post-Partition mass exchange of the dispossessed in 1947 — except this is just one-way.

Media reports kindle public sympathy. Yogi Adityanath mobilises hundreds of buses to ferry “his” people home to Uttar Pradesh. Their cousins from Bihar are left to brave the searing summer heat and exhaustion — some die on the way.

November 2020, New Delhi, Mumbai — lockdowns are long over but most people now carry documents to prove residence, drown themselves in vitamins and track the apps for movement restrictions. The worst is over. The Covid monster is dying. But the fear is palpable of being dragged under by its distended death spasms.

The ongoing pandemic’s most telling debris — other than heightened neurosis and germaphobia — are the ubiquitous masks. Masks everywhere in a macabre caricature of a Venetian Carnival — except here masks are the vehicle to scurry home not strut the streets and party.

Product design lags horribly. The masks either keep pollution out or the deadly spiked pathogens. You must choose between the two — a senseless game of Russian roulette. Pollution choked lungs gasp for air through impermeable medical grade masks. But there are eyes watching everywhere now. Furtively, you avert your face, tug downwards and gulp in the air quickly, lest someone fingers you for violating the Covid regulations. Some are complicit out of propriety; others to escape the Rs 2,000 fine.

Sitting next to a stranger on a bus, in an aircraft or even in a waiting room is so off-putting that it makes you shun all human contact and become a mole. Voluntary social distancing is not going away anytime soon.

For the well-off, excluding others from physical proximity, unless they are suitably bathed and clad, was always the norm. South Asians smarten up before they go to beg for relief for a Bahubali (big man). It is not just hotels and the military, which enforce daily dress and hygiene inspections. Privileged homes also follow this rule, requiring house help to change into “clean uniforms” before going about their work.

It all goes back to the Raj, when memsahibs would drill the women of the “coolie lines” — people not like them — on the basics of hygiene, partly, to forestall the spread of classless contagion to the “main house”.

Hawking or spitting is second nature to South Asians. An early morning ritual which requires the most labored exertions to eject yesterday’s detritus from around our gullets, in a fluid heave by contracting the stomach and gagging ferociously. Sensible Europeans brush their teeth post dinner. Asians must do it early in the morning, before eating anything, or lose their meal.

Touching and feeling anything and everything is second nature. It could be a door frame, the back of a chair or even the person ahead of oneself in a queue. Does “connecting” physically create a human chain of reassurance circling the Globe?

With masks obscuring the face, all-American, blindingly white teeth and a now-it’s-on, now-it’s-off toothy smiles are yesterday’s asset — dentists, beware of your declining profits. Today it is the eyes which are once again the windows to a person’s soul.

And don’t forget how voice and audio have eaten into video’s share as the principal tool for business and social communication, to access knowledge, music, shows or catch-up on current affairs because pod casts allow you to “multitask” — the holy grail of the 2020s, also known by the less flattering epithet of “shared attention” — as by a mother of quintuplets.

Personal vehicles, insanely popular in South Asia because of poor public transport, soar in appeal. They extend the bubble of “safe social isolation” to the street. The purveyors of the virtues of “shared mobility” need to come up with very rigorous sanitisation options before people go back to Uber and Ola. One option is drive through UV sanitizers — giant versions of the smaller ones for home use, to disinfect mobiles and parcels, now available at between Rs 2,000 to Rs 10,000 apiece.

Accessing doctors is, at once convenient and yet dreadfully stressful. Letting a doctor look down your gullet online whilst lying in your bed is sheer luxury, as is ordering medicines like pizza. The bad old days of heaving yourself to a hospital or a clinic for a doctor’s appointment or to get a medical test done, are now mere memories, except for the truly ill, who now need generous insurance policies and “connections” for non-Covid medical help.

Dying at home was once a preferred eventuality for the aged. Today they are denied even this final dignity. Doctors hesitate to certify the cause of death. Even the dead must pass by a hospital to be stamped as “non-Covid” before being cremated or buried. Some say, the movers and shakers, who know how to live and die comfortably, get certificates prepared in advance, just to avoid the detour. Kafka rules now more than ever.