The Congress tweeted its own version of a “survey”, showing that the majority felt Modi had lost the ability to safeguard nation’s borders 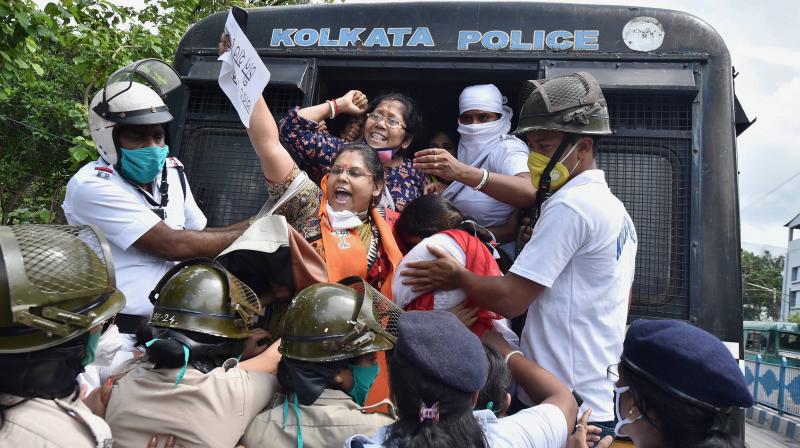 The ongoing battle between the Narendra Modi government and the Congress over the border clashes with the Chinese in Ladakh took an interesting turn last week.

Keen to dispel the perception that the India-China standoff had hurt the Prime Minister’s image, the Bharatiya Janata Party wanted to make sure that the widest possible publicity was given to a survey conducted by a “friendly” agency showing that Narendra Modi’s approval ratings continued to be high and that as many as 73 per cent respondents trusted him to handle national security.

The party’s media managers called up select newspapers to request that these findings be published on the front page, adding that the Prime Minister’s Office was especially keen on it.

Meanwhile, the Congress was alerted to the survey’s findings and the BJP’s phone calls. It decided to send out a reaction to the BJP’s survey and requested media houses that the Congress response should also be carried on page one.

The Congress tweeted its own version of a “survey”, showing that the majority felt Modi had lost the ability to safeguard the nation’s borders. In the end, few newspapers gave the two items front-page treatment.

The Congress Party’s younger members, generally perceived as Rahul Gandhi’s camp followers, are particularly pleased these days for two reasons. One, they are thrilled that the Nehru-Gandhi scion is back to attacking Prime Minister Narendra Modi on his handling of the Chinese intrusions into Indian territory which resulted in the death of 20 Indian Army soldiers.

The younger lot had been feeling demoralised when Rahul Gandhi chose to make himself scarce after he stepped down as Congress chief last year. Second, they are relieved that India has not resumed its international flights.

This means that Rahul Gandhi cannot take off on one of his mysterious trips abroad, as he is often prone to do, and will necessarily have to stay put and focus on his ongoing battle with the Modi government.

The long, overdue reshuffle of the Bharatiya Janata Party office bearers has led to considerable speculation in the party as the changes are imminent any day now.

There are two divergent views on the composition of BJP president J.P. Nadda’s new team. One section believes that all the present party functionaries will be replaced to strengthen Nadda’s position and to send out a message that he is now in charge.

Others argue that only cosmetic changes will be made as former BJP chief Amit Shah continues to retain a firm grip on the party organisation and he is unlikely to see his favourties go.

In any case, Nadda is not expected to take an independent decision on the new appointees and it can be safely assumed that the former BJP president will have a major say in the formation of his successor’s team.

Shivraj Singh Chouhan is a four-time chief minister of Madhya Pradesh and known to be close to the Rashtriya Swayamsevak Sangh.

His predecessor Kamal Nath is a senior Congress leader, has won nine Lok Sabha elections from Chhindwara, has held important ministerial portfolios at the Centre and is currently Madhya Pradesh Congress chief.

Despite their seniority and distinguished record, both leaders appear to have lost their original sheen. Though he did manage to come back as chief minister, Chouhan’s wings have been clipped by the party leadership.

He has to contend with a BJP state chief who is not known to be on his side while home minister Amit Shah’s favourite Narottam Mishra, a minister in Mr Chouhan’s Cabinet, is calling the shots in Madhya Pradesh.

It’s the same story in the Congress. Kamal Nath may be heading the state unit but it is former chief minister Digvijaya Singh who is running the party as the bulk of legislators are his loyalists.

The Congress got a chance to dethrone the BJP government in Manipur when its alliance partner, the National People’s Party, withdrew support and three ruling party legislators put in their papers. However, the Congress managed to squander away this opportunity.

The party’s Manipur unit apparently sent several messages to the Congress headquarters requesting that New Delhi rush a team of leaders to the state to help with the heavy lifting.

But, for some odd reason, there was no coherent response from Delhi. Gaurav Gogoi, the Congress in-charge of Manipur, was busy in West Bengal and did not visit the state till it was too late.

Congress insiders insist that this was deliberate and that Gogoi and his father, former Assam chief minister Tarun Gogoi, are unwilling to take on the BJP government because of personal compulsions. While the Congress failed to act in time, the BJP was quick to fight back and save its government.