When the lockdown came without notice, and the regime left the 400 million informal sector in the lurch, the Indian state sat unmoved 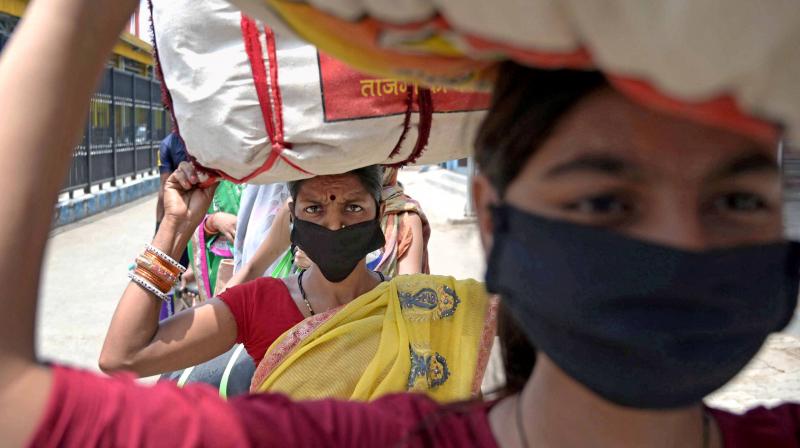 Migrants, who have arrived from Surat in Gujarat, walk to board buses to reach their native places, during ongoing COVID-19 lockdown. PTI Photo

Now it is hard to find any classes of people, including among Prime Minister Narendra Modi’s followers, who believe that the PM has given leadership in the execution of the urgent twin tasks before the country — of fighting the pandemic, and dealing with the economy — after the unknown virus struck, or even before.

The thali-banging, the cheap diya trick linked to a religious motif of the majority community, and the perverse showering of flower petals on hospitals by the Indian Air Force (a waste of the taxpayer’s money) even as medical professionals remain massively exposed to risk for want of appropriate gear, look especially decrepit as moves to raise morale.

Indeed, looking back it is clear that these were acts of desperation by one who was low on ideas of any intellectual, social or political depth or sophistication. Rather, they resembled artifice of a small-time sorcerer who found himself in a corner. At any rate, these were hardly steps that would advance the fight against a virus.

What’s important, though, is that the intent behind these rituals was the glorification of an individual as an “innovative” thinker, one who was heads and shoulders above other politicians. Some in the poodle media even sought to talk up the leader for wearing a “munda”, a sarong-like lower garment of common use in South India to which the PM is unwonted, as he stood by a tall temple lamp in televised images, as they thought this would raise his stature in the south.

When the lockdown came without notice (as had demonetisation in 2016 with terrible consequences), and the regime left the 400 million informal sector work force in the lurch, forcing lakhs of them to embark on a very long march home, the Indian state sat unmoved, issuing meaningless directions. It refused to provide transport until pushed to do so by an angry public opinion, and even then it moved grudgingly, fitfully, grumpily, and minimally. It became quite apparent then that this government was not going to lift its little finger to help even when the people found their life-energy ebbing.

What is still unfolding before us — the march of the otherwise invisible millions seems far from over — is the most tragic spectacle in independent India concerning the country’s poorest, and the government’s pretty much point-blank refusal to assist them in any immediate or tangible way in this dire hour.

The truth is that the whole world too has watched this in horror as disturbing pictures of our people at their most vulnerable have played out on television screens across the globe. The carefully cultivated image of Mr Modi’s “New India”, devised by the regime’s spin machine and its media collaborators, lies in tatters.

Today, it is truly “New India” versus “Pareshaan India” (or Mentally Exhausted India).

The effect of this on our foreign policy cannot immediately be assessed but it is likely that after this we will be unable to look even the world’s poorest nations in the eye for some time to come. Some of them are in our neighbourhood, and that’s bad news as the little frogs would have had the big frog figured out. For the big-league players, we might now just become an object of condescension, shorn of leverage, made to sweat for a seat in the reserves.

After the migrant labour horror show, the question really engaging people’s attention today is this: “Does the Beloved Leader have feelings for anyone, except himself?

And, does he have any goals other than the ‘3 S’s’ of self-advancement, self-aggrandisement, and self-praise?” Of no previous Indian leader has this been asked, and no other question is asked of leaders in places like North Korea, China, and lately the United States.

It is no less than remarkable that the PM is yet to speak even in passing about the misfortune of the lakhs of migrant workers walking back home, such is his haughty aloofness and contempt for the poor. His acolyte finance minister has followed suit.

Nirmala Seetharaman held tedious press conferences spread over the better part of the week after her leader did data jugglery to announce a Covid relief package of Rs 20 lakh crores, or roughly 10 per cent of the GDP, which was later revealed to be less than one percent of the GDP. She too steered clear of the subject of the Long March of the Migrant Worker. She was, in fact, peeved that a Congress leader, Rahul Gandhi, had sat down by the roadside to speak to a cluster of labourers trudging back home to their distant village.

Ever Orwellian, the PM has announced an “Atma Nirbhar Abhiyaan” — a Campaign of Self-Reliance. If there are any soaring ideas that underpin it, we have not been told yet. But on the face of it, the voodoo scheme looks like being nothing more complex than a “Fend For Yourself” Campaign, and the Devil take the Hindmost.

The 15-year-old Bihar girl, Jyoti Kumari Paswan, understood the meaning of Mr Modi’s words perfectly. She knew her government wouldn’t stand by the likes of her. She picked up her father with a broken leg and pedalled on a second-hand bicycle from Gurgaon to their home in Darbhanga, 1,200 kilometres away. It was a profile in courage born out of the deepest existential doubts. India’s most needy have been thrown to the wolves.

After 60 days of lockdown, the Covid positivity curve is rising aggressively (in Italy and China, among the worst hit nations, it flattened in 40 days) and the poor are the main victims. Since the regime loves false comparisons to make itself look good, Pakistan, Bangladesh and Sri Lanka have done better. As for the economy, the prognosis is a growth rate of well below zero per cent.

In such an hour, the government has opted to disrupt national unity on a religious and partisan basis. Over weeks, official pronouncements have sought to draw forced attention to the irresponsible behavior of a Muslim sect for the spread of the pandemic, shielding from view policy failings, and blamed non-BJP state governments and politicians. The government has also run amok arresting, during the lockdown, activists who had earlier opposed the discriminatory citizenship amendment law.