India has over 410 million workers in the unorganised sector, a majority of whom are daily-wagers earning little more than prescribed wages 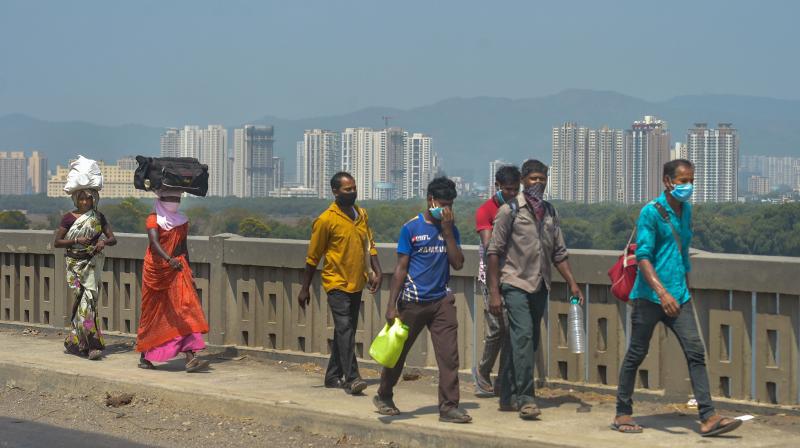 Migrant workers from Akola district of Maharashtra walk along Mumbai-Nashik highway to reach their native places, during a nationwide lockdown in the wake of coronavirus, in Thane. PTI Photo

It is time now to sit back and objectively reconsider the draconian policy measures unleashed in India in the context of the Covid-19 pandemic. In one fell stroke, we have managed to render wageless at least 100 million people in our country. We still don’t have any clear picture of the deaths due to lockdown stress, but we are getting more clarity on the economic losses that it has caused.

Epidemiological studies put out by well-regarded institutions like MIT and the Global Virus Network (GVN) suggest that this particular coronavirus is endemic in populated areas falling in the temperature band of 3-17 degrees Celsius, with humidity between 51-79 per cent. These initial findings, suggesting a correlation between latitude and incidence, have the powerful endorsement of Dr Robert Gallo, the famed virologist and head of GVN.

An important fact to be considered about Covid-19 is that while it is virulent, its fatality is only about 3 per cent, and that is principally concentrated among the elderly and the already ailing.

Its symptoms are mostly akin to common seasonal flus which are often attributed to a change of season, etc. Over 80 per cent of the infected people remain asymptomatic or have mild symptoms. Covid-19 can only be confirmed by testing and the cheapest test costs about Rs 4,500 each. What we are testing only confirms this. There is no treatment and no vaccine as yet. We must focus on that.

The average life expectancy of Indians is 68.7 years. The above-65 years cohort accounts for only about 6 per cent of India, which suggests that the incidence of fatality here will be lower. Bubonic plague has a mortality of over 80 per cent, while even diphtheria has a mortality rate of almost 20 per cent.

Covid-19 is not a killer virus. In developed nations like the United States, Italy and elsewhere with substantially higher life expectancy, the 70-plus cohorts are much bigger. The mortality rate has been the highest in Italy, with about 9 per cent.  Almost 86 per cent of the Italians who died were over 70 years. Italy has the second oldest population in the world after Japan, with over 23 per cent over 65 years. Experts believe this was the determining factor in Italy’s high fatality rate.

The goal of ‘social distancing’ is a hugely unfulfilled aspiration. The poor in India live cheek by jowl, with densities often exceeding 60,000 per square mile. India has over 410 million workers in the unorganised sector, the vast majority of whom are daily-wagers making a little more than the prescribed official wages and often much below that. This working-age cohort is mostly made up of younger Indians. The youthful age group (14-35 years) accounts for about 34 per cent of India’s population. This cohort is about as much as the 35-65 years cohorts. Thus, even if the pandemic is real for India, the fatality due to it will be much less. A large number of Indians who might get infected by the Covid-19 virus may not even know it.

Now assume that the Covid-19 pandemic will overwhelm India and consider India’s abysmal healthcare scene. We have six physicians, nine hospital beds and 13 nurses per 10,000 people.  Nationwide, we have less than 40,000 ventilators and only 70,000 intensive care (ICU) beds. This calls for a policy that will help stagger the load and allow immunity to build up without overwhelming the critical care system.

Harvard’s Yonatan Grad, professor of immunology and infectious diseases, and his colleagues conducted research on how to prevent overwhelming the US healthcare system during the pandemic. This indicates that the only possible method for dealing with the epidemic may be multiple “intermittent” social distancing periods that ease up when cases fall to a certain level and then are reimposed when they rise past a key threshold. As time passes and more of the population gains immunity, they said, the restrictive episodes could be shorter, with longer intervals between them. Clearly, the nationwide simultaneous social distancing imposition was not only hasty, but also ill-conceived.

Dr Johanne Giesecke, one of the world’s most senior epidemiologists and an adviser to the Swedish government, the first chief scientist of the European Centre for Disease Prevention and Control and an adviser to the director-general of WHO, lays out with typically Swedish bluntness what he thinks: That (1) The policies on lockdown in many countries are not evidence-based; (2) The correct policy is to protect the old and the frail only; and (3) Only this will eventually lead to herd immunity as a “byproduct”.

Closer home, Dr Jayaprakash Muylil, dean of the Christian Medical College and Hospital, Vellore, is also unequivocal about the efficacy of the lockdown. He says we must build herd immunity while shielding the vulnerable. He also made it clear that the flattening of the incidence curve would stop once the lockdown is lifted. The lockdown cannot be a permanent solution. “The question of containing the virus is out. In 2009, there was an epidemic of H1N1 influenza. What happened to it? It came in and stayed for 2-3 months and spontaneously disappeared. Nothing that we did at that point of time was of help. It went away. Why? It is because of a certain level of herd immunity that was produced by the infection. So our only hope is that, on its own, this virus is headed in that way -- in a particular way of herd immunity”.

Apart from the coronavirus pandemic, we seem to be also afflicted by a panic and hysteria pandemic. We have begun to fear that the worst is at hand. Far from it. This is not the bubonic plague or smallpox. This is a more inspired version of the seasonal flu that we have been accustomed to, but with a slightly higher fatality rate. We need to have the courage to take a rational look at the known facts and act accordingly. We need to lockout our fears and ease off the lockdown.