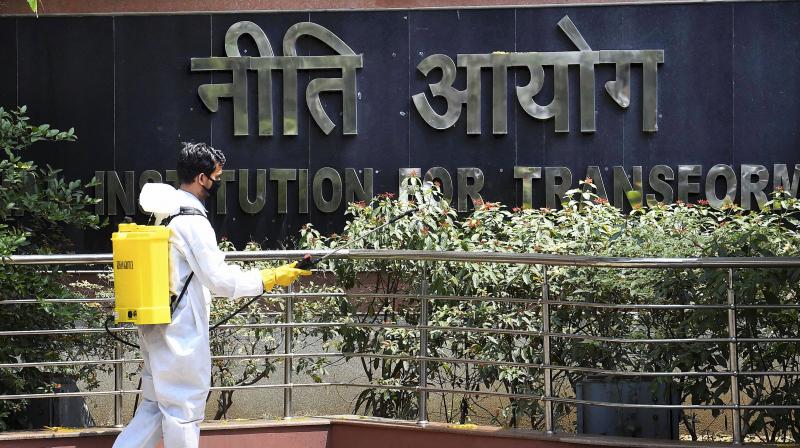 Moving past the heated rhetoric in India about how to deal with China, the astute Mr Kant knows the importance of China’s investments to India’s ambition of becoming a $10 trillion economy. PTI Photo

Niti Aayog CEO Amitabh Kant has downplayed China’s criticism of the Modi sarkar’s decision to tighten its foreign direct investment (FDI) policy, which is seen as an attempt to wall off the Chinese dragon from making further inroads into India’s economic ecosystem amid the Covid-19 pandemic. Rather, Mr Kant has said that India welcomes investments from China.

The government’s decision was greeted by many nationalistic supporters of the government who saw in the move a bold stance against an aggressive China, which is also being blamed for the spread of the coronavirus that is wreaking havoc in India and across the globe. The decision was likely triggered by the People’s Bank of China increasing its stake in HDFC Bank from 0.8 per cent to 1.01 per cent earlier this year. Many Indian companies that were already stressed even before the pandemic broke out are likely to turn insolvent. The government has been concerned that cash-rich Chinese investors could ramp up acquisition efforts, taking advantage of a drastic drop in the valuation of the stressed companies.

But Mr Kant’s statement has stopped the nationalist supporters in their tracks, some may even be confused since they sense the government may be backtracking after the decision. But those in the know are also aware that Mr Kant is one of the very few babus in the current dispensation who has Prime Minister Narendra Modi’s ear and enjoys his confidence. He is not just heading the government’s premier policy think-tank but has a presence in practically every aspect of policymaking in the Modi sarkar.

Mr Kant was also chosen to head the empowered committee set up by the government to strategise an effective response to contain the spread of Covid-19. He firmly believes that how India fights the Covid-19 virus will be a determining factor in how the world shapes up once the virus threat is contained. This inevitably involves deft coordination between proactive political leadership, agile bureaucracy and public cooperation. He also knows that fighting the virus at the cost of the economy is simply not an option. So, he moved quickly to clear the air and to send out a conciliatory signal to China, which not surprisingly, took umbrage at India’s decision.

Moving past the heated rhetoric in India about how to deal with China, the astute Mr Kant knows the importance of China’s investments to India’s ambition of becoming a $10 trillion economy. Mr Kant knows that China is one of the biggest investors in India, pouring in more than $8 billion across various sectors over the years. It has been a major player in India’s startup story and perhaps is the only nation at present that is in a position to invest in other countries in these times of the novel coronavirus. Mr Kant comes from the pragmatic position where China will need to be dealt with firmly but also with one eye open for the much-needed financial inflow it can bring.

The consumer affairs department will replace officials who are unable to report to work due to medical or other valid reasons. Sources say that department secretary Pawan Kumar Agarwal announced this decision after some babus did not show up for work despite the government’s directive. The department plays a crucial role during the lockdown since it oversees the supply of essential commodities and monitors price. The government has exempted the movement of essential commodities from the lockdown, which has been extended till May 3 to prevent the spread of Covid-19 in the country.

Sources say that a list of officers unable to come to work is being prepared and a memo has been issued. It has been decided to seek their replacement from the department of personnel and training (DoPT) to maintain optimum staff levels.

Apparently, there was some confusion over a memo that sought to compile a list of staff and officials who are unable to come for emergency duties during the lockdown period. Now a new list is being prepared.