What will happen when the state apparatus needs to act beyond its capacity to cater to lakhs and crores of infected? 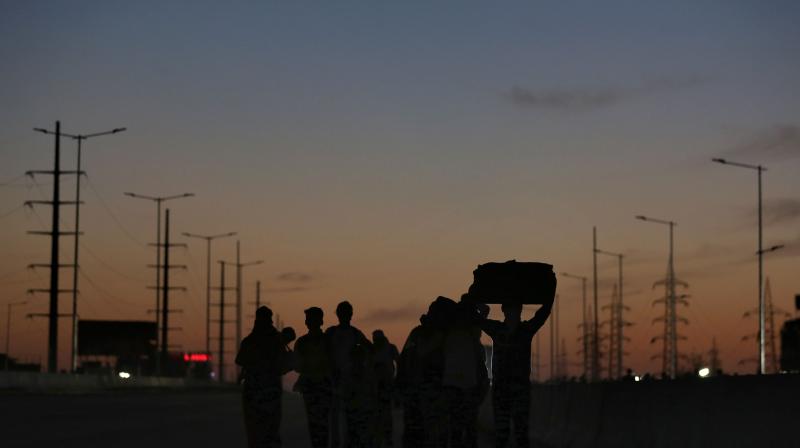 An Indian migrant worker's family is silhouetted as they make the journey to their village by foot, following a coronavirus lockdown in New Delhi, India on March 28, 2020. Authorities sent a fleet of buses to the outskirts of New Delhi to meet an exodus of migrant workers desperately trying to reach their home villages during the world's largest coronavirus lockdown. Thousands of people, mostly young male day laborers but also families, fled their New Delhi homes after prime minister Narendra Modi announced a 21-day lockdown that began on Wednesday and effectively put millions of Indians who live off daily earnings out of work. (AP)

Why is India in lockdown? Our economy has come to a halt and there are predictions that gross domestic product may contract by as much as five per cent because of this loss of production. Clearly, there is a good and strong reason for us to all stay at home. But what is that reason?

The famous Johns Hopkins University’s Centre for Disease Dynamics, Economics and Policy has released a study predicting the spread of coronavirus in India. It has examined three possible scenarios.

High – the trajectory with current lockdowns but insufficient physical distancing or compliance.

Medium – Most likely scenario with moderate to full compliance but no change in virulence or temperature/humidity sensitivity.

Under low or the optimistic scenario, the Centre predicts that by June a total of 12 crore Indians will be infected and of these 11 lakh will be hospitalised. Of course India has only 70,000 ICU beds and only 40,000 ventilators so most of these people will not receive treatment.

The medium (most likely) scenario has 18 crore people infected and 18 lakh in hospital and the high predicts 25 crore and 25 lakh. These are numbers we cannot manage, even in the low numbers scenario. Does the government agree with these scenarios? And if not, does it have alternative scenarios? We do not know.

The only possible reason is that the lockdown will slow the spread. But then what? The answer to that is not known because nothing has been discussed with us other than the lockdown. The confusion is compounded because it appears that India appears to be in some way immune to the spread in the way that it has happened in other nations. New York is being devastated by it and even the British prime minister is infected. So what’s going on in India?

To understand that we must know that we really have no idea how many people in India are infected. Total tests done till date are for the United States 5.5 lakh, Germany 4.5 lakh, Korea and Italy 3.5 lakh. India has tested 27000. We have tested as many people as The Netherlands, which has a population of less than Delhi. The Netherlands has 8,000 positive cases, 10 times more than India.

Andhra Pradesh has so far tested only 384 people. Spain, which has a population of less than Andhra Pradesh has tested 3.5 lakh people. The fact is that our real positive numbers are hidden, the only question is by how many.

All of South Asia is returning low numbers of coronavirus positive cases. Pakistan has the most but only 1,200. India has 800, Bangladesh 44, Sri Lanka 106, Bhutan and Nepal three each and Maldives 13.

So why are we not testing more? A report in the web publication, Scroll, which spoke to several state governments, explained that it was not an issue of a lack of kits, but a lack of laboratories. Many states don’t have a single lab to test. Nagaland, for instance, needs to send samples to Assam. The second reason was that people were backing out of testing from private labs after realising that the home test would involve nurses coming in protective gear to their doorstep. They did not want to be stigmatised by their neighbours and so cancelled the test.

The private test is Rs 4,500 and after learning that they would have to pay and it was not free, other people would also back out. Many labs also think that it is too much work for such little money, and they do not have the protective gear and they don’t want to put their staff in danger. The lockdown has also made it difficult for the private labs to get around. All of these have contributed to our low numbers and as the days go by we will learn that despite the lockdown, the numbers of infected are growing exponentially.

What happens after that? This can only be answered if we know what the lockdown is meant for. As the last few days have shown there appears to be no plan even at the very beginning of the lockdown for the lakhs of people who are walking across India with no water, food or money. What will happen when the state apparatus needs to act beyond its capacity to cater to lakhs and crores of infected? Unfortunately that is not a hypothetical question. We will learn the answer very soon.