Guided by common sense, the women of Shaheen Bagh have been extraordinarily focused on the Constitution 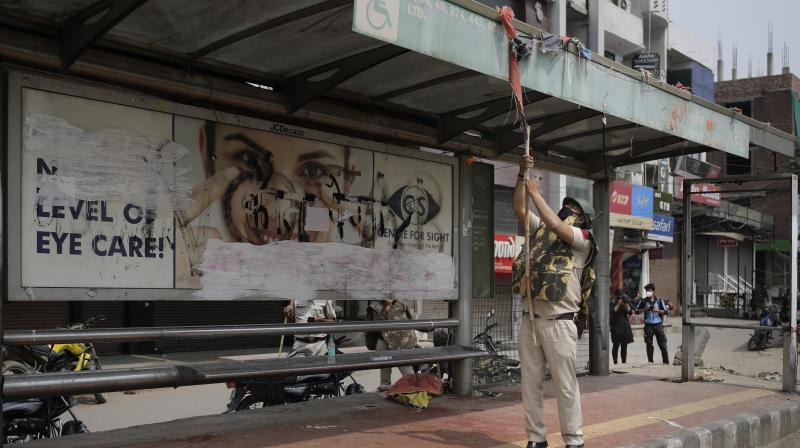 A policeman pulls the remains of an anti new citizenship law banner as local authorities clear the protest site of Shaheen Bagh in New Delhi on March 24, 2020. (AP)

A pity that television cameras were not on to record the elegance with which the protesters at Shaheen Bagh pulled the reins, paused and recast their movement to harmonise with the requirements of public health in view of the pandemic and the rule of law, in order not to be foul of Section 144 and the curfew. The banners, graffiti and flags are now on the walls and balconies facing the protest site. Even the wayside library that had sprouted nearby has moved to a balcony. The Shaheen Bagh protests against the CAA had, in any case, transformed themselves into a nationwide debate on the Idea of India.

The latest to grapple on that theme have been two senior members of the Indian Foreign Service, a story I have dwelt on recently. Deb Mukharji, of the 1964 batch, a former high commissioner to Bangladesh, in an article in a leading newspaper, applies the image of the falcon, which is what Shaheen means, to the Shaheen Bagh movement. The bird that soared — is his preferred simile. This invites a riposte from Kanwal Sibal, 1966 batch, and a former foreign secretary. “Incidentally, falcons are predators,” says Sibal’s riposte on the IFS blog. So unabashed is he on the secularism-nationalism debate that Mukharji feels constrained to challenge him, rapier in hand, on the very same blog.

What should a discerning non-Hindu’s stance be towards conversations of this nature which are taking place at numerous levels with a frequency gathering in momentum? First, consider the evidence.

Justice S Muralidhar of the Delhi High Court is transferred within hours of his criticising the Delhi police over continuous violence for three days, its failure to register FIRs against hate speeches by the BJP’s Kapil Mishra and others. Arbitrarily transferred he might have been, but the farewell to him by Delhi’s lawyers shows record attendance, with men and women in black gowns leaning over the railings. The optics proved who won.

UP chief minister Yogi Adityanath’s government plasters city walls in Lucknow with poster-size photographs of activists in the anti-CAA protests. The Yogi is determined to “name and shame” the protesters. The entire operation is on the basis of allegations — no proof.

The chief justice of the Allahabad High Court, Govind Mathur, takes suo motu notice of the outrage and raps the UP government on the knuckles. The intra-Hindu tussle is at its fiercest in UP. Little wonder then that retired High Court judge Rakesh Sharma brings out his arsenal and takes aim at the sitting chief justice. “The competent revenue authority collector DM Lucknow has several powers, including coercive action of attachment sale of property.”

As I have always maintained, in this orchestra the first violin was played in 1947. That musical score is now approaching the loud clashing of cymbals reminiscent of Wagner who, incidentally, was Hitler’s favourite composer.

The Mukharji-Sibal exchange is a summing up of the epic debate which has the nation in thrall. Since both are eloquent on their respective positions, let them speak. Mukharji sees three distinct takeaways from Shaheen Bagh.

“First, the Muslims as a community have emerged from a state of withdrawal and firmly demanded their rights as citizens of India, without seeking any crutches of political support.

“Second, Muslim women have liberated themselves from the taboos that kept them confined to their homes in large parts of India. Veiled women have been able to look their interlocutor in the eye and firmly claim that neither ‘mard’ nor ‘maulvi’ would stand in the way of their demanding a just future. Whatever the eventual political outcome of their demands, the liberation of the spirit of the community, and its women in particular, is here to stay.

“Third, the women of Shaheen Bagh have reclaimed what others had ceded to an aggressive nationalism of violence, hatred and divisiveness -- our flag and our national anthem. And the nation has been reminded that the ultimate guarantor of our freedom is the Constitution of India.”

Enter Kanwal Sibal. Sambit Patra on the Arnab Goswami show could not have been better.

“You have completely overlooked the hatred and poison injected into the people by the so-called tukde tukde gang, the adulation of terrorists, Owaisi’s rants, those of the leader of the Bhim Sena, recent statements about emulating Shaheen Bagh and cutting off our Northeast by Muslims who form a majority in the Chicken’s Neck area, the attempt to block the Jaffrabad Metro area in the light of the seeming success of the Shaheen Bagh that you extol, and, of course, Mamata Banerjee’s ravings.”

Mukharji is determined not to let this go unchallenged. “I am disturbed by your comment about cutting off our Northeast by Muslims who form a majority in the Chicken’s Neck area.” Having been posted in Bangladesh, Mr Mukharji knows the vulnerability of Chicken’s Neck. He therefore asks with authority: “But what is the Muslim connection?”

On Sibal’s tukde-tukde swipe, he is hard-hitting. “When approached under RTI, the home ministry said they had no knowledge of any such entity.” He agrees with Sibal that India is not yet a fascist state, “but I think we are showing disturbing signs of a pre-fascist one”.

This war within has had its share of martyrs too — rationalists like M.M. Kalburgi, Narendra Dabholkar, Govind Pansare and Gauri Lankesh, to name just a few.

Participation in this epic Kurukshetra by Muslims like the personal law boards have in the past helped exactly the forces which menace the nation today. Keep an equal distance from the Hindu, who by himself is better situated to let a hundred flowers bloom. Even more important is to keep the venerable maulanas away, busy with matters of faith.

Emulate the women of Shaheen Bagh who, guided by an intuitive and robust common sense, have been extraordinarily focused on the Constitution, the national anthem and the flag. The larger society is still sorting itself out.