Opinion   Columnists  28 Dec 2021  Naor Gilon | Why Hamas is a threat to Israel, to the world and to Palestinians
Opinion, Columnists

Naor Gilon | Why Hamas is a threat to Israel, to the world and to Palestinians

Naor Gilon
The writer is the Israeli ambassador to India

Hamas is a radical Islamist terrorist organisation, the Palestinian equivalent of the Islamic State, or ISIS 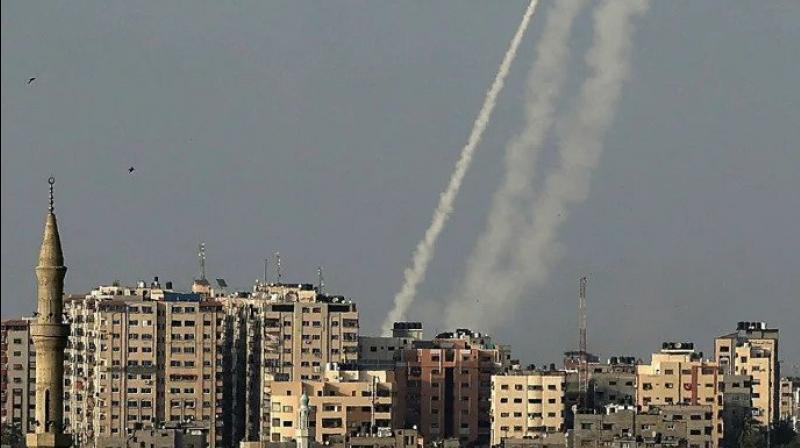 Rockets are fired towards Israel from Hamas-controlled Gaza City (AFP)

Thirty-two-year-old Soumya Santosh from Idukki district in Kerala had been working in Israel for the last seven years. On May 10, 2021, tragedy struck when a Hamas rocket hit the house she had been working in as a caregiver in the southern Israeli coastal city of Ashkelon. She was on a video call with her husband in India when the initial Hamas rocket barrage began on the city. People ran for cover to the nearest rocket shelters. But some could not make it in time.

One such person was Soumya Santosh, who was killed immediately, while the elderly woman in her charge was hospitalised in serious condition. The nearest rocket shelter was at least a minute’s run away from their house and the pair were unable to reach it in time.

Soumya Santosh is survived by her husband and a nine-year-old son. There are many people like her, some foreigners, others Israelis, who would be alive today were it not for indiscriminate terror attacks by Hamas. There are many families and friends who have lost their loved ones because of Hamas operatives, who continue to take innocent lives in Israel.

Eli Kay, a young new immigrant from South Africa, wanted to live when he was shot down by a Hamas gunman on his way to the Western Wall. Khalil Awad and his 16-year-old daughter Nadin also wanted to live when a Hamas rocket fired from Gaza directly hit their home. Five-year-old Ido Abigail was killed by another Hamas rocket. Israeli teenagers Eyal, Gilad, and Naftali certainly wanted to live when they were kidnapped and murdered by Hamas operatives in Judea and Samaria.

We all believe in peace. We believe that even in the midst of the bitter animosities in the Middle East, conflicts can and should be resolved peacefully. Our shared values mean that we must fulfil the responsibility to build better lives for our children, and a better future for us all.

Hamas is a radical Islamist terrorist organisation, the Palestinian equivalent of the Islamic State, or ISIS. It aspires to take control and impose Sharia law throughout all areas of the Palestinian Authority.

Hamas staunchly opposes peace and coexistence, with its stated goal being the destruction of Israel. Instead of providing for the welfare of Gaza’s citizens, Hamas uses its resources to increase its military capabilities, benefit its own members, and pursue its goal of wiping the Jewish state off the map. Earlier this month, the terrorist organisation had marked the 34th anniversary of its founding.

Hamas ruthlessly seized control of the Gaza Strip in 2007 in a violent and bloody coup, throwing their Palestinian political opponents off high-rises and publicly executing others in order to consolidate its own power. In the 14 years that have passed since, the Palestinians in Gaza have essentially had all of their democratic and human rights stripped away from them. Protests against the failing economy and electricity shortages that Hamas has brought about are responded to with beatings, arbitrary arrests and torture.

As its overtly antisemitic and anti-Western charter makes chillingly clear, Hamas’ primary goal is to “obliterate” Israel “through jihad” and extend its Islamic rule ‘from the river to the sea”. To achieve this end, Hamas has fired over 27,000 rockets and mortar bombs at Israeli civilians since 2001, including over 4,300 in the May of 2021 alone. Not only does Hamas deliberately target innocent Israelis, it also fires its rockets at Israel from residential areas in Gaza. Firing at civilians from within civilian areas is an outrageous double war crime, and Hamas does it for one reason -- to maximise Palestinian deaths, simply in order to provoke misguided condemnations of the Jewish state and stoke anti-Israel sentiment across the world.

The harm that Hamas inflicts on its own people extends even beyond the borders of Gaza. According to media reports, weapons stored in the basement of a Hamas-controlled mosque in southern Lebanon exploded in a fire a few days ago, killing and injuring numerous people. By storing arms in a mosque in one of the poorest refugee camps in Lebanon, Hamas has yet again demonstrated its contempt for all human life, including that of the Palestinians.

Israelis and Palestinians deserve to live in peace. Hamas, however, stands firmly against the values of peace and democracy, and remains committed to destroying the lives and futures of both sides instead. Thirty-four years after its establishment, and 14 years since it violently took over Gaza, Hamas still represents one of the most significant obstacles to achieving peace and regional security.

Whoever aspires towards peace must understand and recognise that Hamas is a disaster. It is an extremist terror organisation that poses a threat to the Palestinian Authority, a danger to any prospect of peace, and seeks to obliterate Israel. These facts have now been recognised by over a dozen states, including Britain and Australia, who both recently designated Hamas in its entirety as a terror organisation. We are calling on all our friends to do the same.

We simply cannot leave Gaza in the hands of Hamas. Rather, we must focus our efforts on the “economy in return for security” vision outlined by Israeli foreign minister Yair Lapid. To create stability and the prospect for a better life for both Gaza and Israel, we must act towards increasing international investment in the Gaza Strip, rehabilitating its infrastructure, cultivating other economic projects, and strengthening the Palestinian Authority.