Let every Indian today, on July 29, the Global Tiger Day, ingeminate the truth that if tigers go extinct, our entire ecosystem will collapse 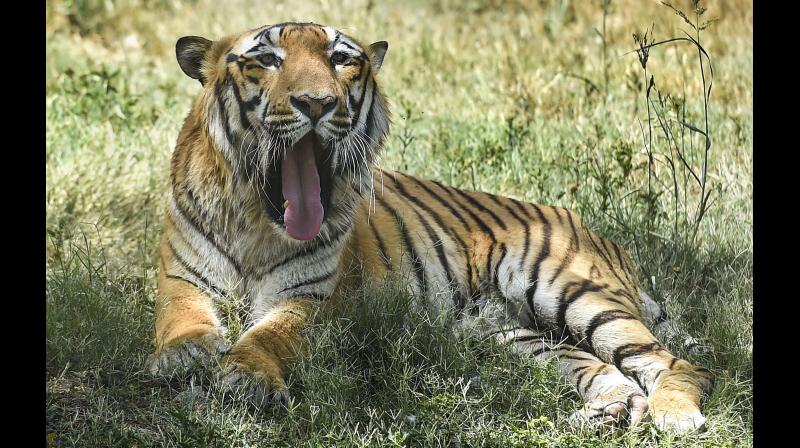 Given the threats, policies addressing conservation of wildlife and nature, and environmental issues must also find an apex position in political agendas. Representational Image (PTI)

Majestic. Ferocious. India’s national animal, the tiger, is a symbol of power, royalty, vigour and strength. India is home to over 70 per cent of the world’s total tiger population. The magnificent orange-golden creatures with bold black stripes and the brightest of wild eyes are apex animals, acting as a linchpin of the ecosystem.

Let every Indian today, on July 29, the Global Tiger Day, ingeminate this truth that if tigers go extinct, our entire ecosystem will collapse.

Ecosystems consist of various components and intersection of different cycles and food chains for the sustenance of life just as in our democracy, where different powers, pillars, institutions and tiers exist to ensure checks and balances. Any imbalance at any level of the food chain causes a proportionate disruption, and sometimes, a disproportionate disruption, one so huge that a particular biodiversity can be lost and ultimately pose a threat to other life forms, even the entire planet.

Worldwide, economic output will decrease by 18 per cent by 2050, per a prediction model, due to loss of varied species, including tigers, according to a study by the United Nations. Moreover, if we continue to destroy habitats, we will become a breeding ground for more pandemics.

Given the threats, policies addressing conservation of wildlife and nature, and environmental issues must also find an apex position in political agendas. The Government of India has recognised the importance of protecting wildlife and has called attention to combining environmental conservation and sustainable growth. Prime Minister Narendra Modi has, on several occasions, reiterated that India needs to define conservation as a means to achieve development, rather than considering it an anti-growth factor. Insisting that tigers are “natural capital” assets rather than obstacles to growth, PM Modi has regularly emphasised the need to protect these magnificent beasts.

India has achieved targets of TX2 (Tigers Times Two, a global commitment to double the population of tigers by 2022) ahead of time. The All-India Tigers Estimation survey recorded 2,967 tigers in India, of which 2,461 have been photographed, making it about 83 per cent of the total tiger population. In terms of coverage and sample intensity, this was the world’s largest wildlife survey.

Conducting this survey was no ordinary feat and truly demonstrates how India incorporates various facets of tiger conservation. This year, the Government of India sanctioned Rs.250 crores for the Project Tiger and Rs.414 crores under the Integrated Development of Wildlife Habitats (IDWH). In 2018, to ensure that tigers are safe from road traffic, the Central government built five underpasses and four bridges connected to the NH44, one of which is 750 metres long and the world’s longest animal-only underpass.

India has emerged as a leader in tiger protection. Our protection methods are deemed the global gold standard. We are realistically optimistic of increased numbers by the end of the next cycle. Relocation of villages from tiger reserves has been an important method to reduce man-animal conflict. It is a pertinent component of Project Tiger, funded up to 60 per cent by the National Tiger Conservation Authority (NTCA).

Unfortunately, this initiative is not being properly conducted in my home state of Telangana due to the state government’s negligence in releasing its share of grants. There have been repeated issues with village relocations and inconsistency in state-share fund allocation.

The TRS government does not seem to attach much importance to wildlife protection. Reports confirm that the forest department made false claims about completion of relocation of the tribal villages of Maisampet and Rampur located inside the Kawal Tiger reserve, leaving 142 families behind. This, despite the Centre having enhanced funds of Rs.8.52 crores for these two villages in 2018-19 and approved diversion of 112 hectares of forest land for it. Deploying a task force for reducing poaching will not help until and unless organically arising social issues are resolved first.

If landscapes are managed appropriately and prey base increased, the tiger population in Telangana can rise significantly. Although forest officials are trying to increase prey base, efforts will go in vain if human-tiger confrontations are not dealt with proactively. Conflicts between villagers and forest officials occur frequently and sometimes take a violent turn. We have learnt from recent tiger killings in villages of Telangana that without a joint effort from stakeholders, conservation efforts fail.

Under the 42nd Amendment, 1976, the Forests and Protection of Wild Animals and Birds Act was transferred from the state list to the concurrent list.

Consequently, it is imperative that both Centre and state work towards a common goal. States have to strengthen field formations, escalate patrolling, promote agroforestry and incorporate information on genetic variation of tiger populations.

Protecting ecology and environment in accordance with the standards of sustainable development is foundational to upholding the right to life of all citizens. Not only do we need to protect citizens’ right to life but we must also make sure that the balance maintained by mother nature doesn’t tip over.