Rahul Gandhi said that the Congress was willing to back anyone as Prime Minister provided the person was not supported by the RSS. 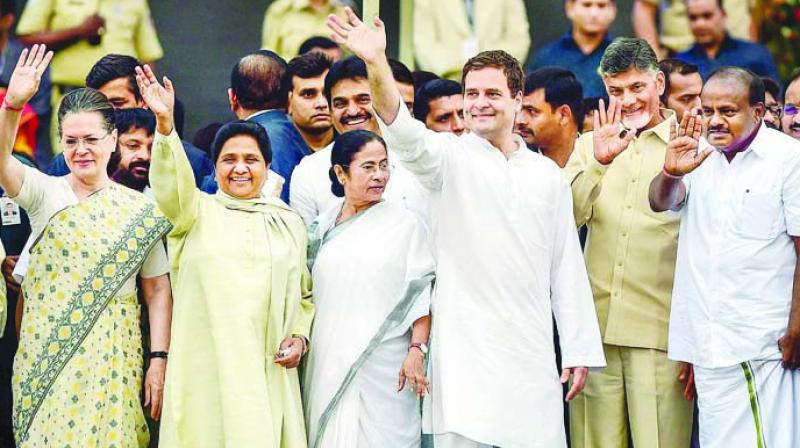 Different Opposition leaders are practising the art of throwing their hat into the ring without threatening other aspirants to the titular position of the “Modi versus Who” poser. A couple of days after Rahul Gandhi presided over his first Congress Working Committee meeting, in which most speakers did not hide their desire to see their president at the helm of the Opposition alliance, Bahujan Samaj Party supremo Mayawati took two seemingly contradictory steps. As her first step, she sacked Jai Prakash Singh, elevated to the post of party national coordinator just two months ago when she asked her favourite younger brother Anand Kumar to step down as vice-president following criticism of fostering dynastic politics on the party. The BSP supremo also removed Veer Singh, who too was national coordinator, although his crime was lesser — not preventing his colleague from offensively commenting on Mr Gandhi’s features — that he resembles his “Italian mother” and not his “son of the soil” father.

If this first stride was a signal to the Congress Party that she will not tolerate slander of its top leaders by her own party leaders and cadre, the second step that she sent was the conclusion of the multi-layered message. In a statement made to a solitary television news agency, but palmed off as a press briefing, Ms Mayawati made it clear that the BSP would not be accommodative in areas of its strength (and the Congress’ weakness) unless the Grand Old Party was magnanimous in states where the Congress was the dominant force ranged against the BJP. In simple terms, this meant that unless the Congress offered a “respectable number of seats” in the impending Assembly elections in Madhya Pradesh, Rajasthan and Chhattisgarh, and additionally agreed in principle to accommodate the BSP later in states like Punjab, Haryana and Uttarakhand, where it has a small but significant presence in pockets, the Congress could not expect fair treatment in Uttar Pradesh, where the BSP and the Samajwadi Party are so far sticking with each other.

On the day Ms Mayawati made the statement, Rahul Gandhi too interacted with women journalists, which was ostensibly “off the record” but put on the @MahilaCongress Twitter handle. Consequently, it was widely written about, although in some instances by direct attribution and in other cases by third person sourcing (“sources close to the Congress president”). At this interaction, Rahul Gandhi said that the Congress was willing to back anyone as Prime Minister provided the person was not supported by the Rashtriya Swayamsevak Sangh. When specific names came up, he did not beat around the bush, candidly admitting that “Mamataji is ideologically closer to the Congress”, despite not ruling out Ms Mayawati as possible choice. His words were indicative of the realisation that “everything will depend who wins how many seats”. No point in allowing dreams to take flight unless one has the numbers! The Rahul Gandhi-Mayawati trapeze act at different locations and on separate occasions, and similar jugalbandhis by others — Mamata Banerjee-Rahul Gandhi and Congress-JD(S) previously — is indicative of the comprehension that all anti-BJP parties can maximise individual kitties only in conjunctions with the others and not by standing separately. Yet, almost every Opposition leader, and quite legitimately, is sending reminders to potential allies that while defeating the BJP is the primary objective, the party interest cannot be sacrificed. In the past few months, after the recent Lok Sabha byelections and the developments in Karnataka, no Opposition leader or party has been grossly irresponsible and thereby provide opportunities for the BJP. Civility has so far been the rule of the game and care has been exercised of not rubbing the egos of others the wrong way. The challenge is to remain responsible as the elections draw near and the parties enter the most challenging phase of seat-sharing negotiations.

As the largest Opposition party with a national footprint, the Congress will naturally expect its position to be recognised. But it must also be pragmatic about its strength. The party must remain reasonable about its prospects in the Lok Sabha polls and also during the impending Assembly elections. The Congress must be aware that it is essential for the BJP to perform creditably in this round if it has reverse uncertainty currently gnawing the party leadership and cadre alike. The party is already facing awkwardness with its allies and the path will get thornier unless it demonstrates all-round optimism. Consequently, the Narendra Modi-Amit Shah duo will have to yield more to allies than in 2014. So far, the Congress has radiated positive signals about an alliance with the BSP in Madhya Pradesh and Chhattisgarh, but its state leaders have shaken their heads negatively to Ms Mayawati’s claims in Rajasthan. This, however, stems from the over-confidence of state leaders who presume that anti-incumbency against the Vasundhara Raje government will become so high that the Congress will be able to match the BJP’s showing in 2013 — 163 out of 200 seats, with a voteshare of 45.17 per cent. However, such exuberance does not recognise that in 2013, when the Congress won just 21 seats with a voteshare of 33.07 per cent, the BSP won three seats and was the runner-up in five seats.

The Congress’ reluctance to accommodate the BSP stems from the fact that although in a majority of seats the BSP’s main rival was the BJP, in two of three seats that the BSP won, it defeated the Congress. Congress leaders in Rajasthan are seeing the BSP’s strength in terms of its historical presence, and that in Madhya Pradesh the party had a voteshare of more than six per cent. Like Ms Mayawati firmly messaged her cadre that petty name calling of the Congress — or the leaders of other parties, even the BJP — is unacceptable, it is for Rahul Gandhi to convey to the state units that they must not lose sight of the larger objective. Every Opposition leader must commit to taking one step backward at times in the hope of taking two forward at another time.