Veena Das | The ‘new normal’ in healthcare a myth

Many patients from low-income neighborhoods tend to first access private providers, before turning to government-run facilities 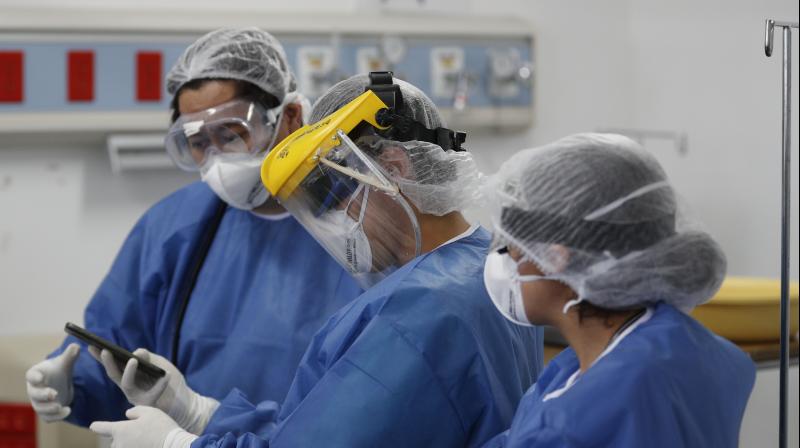 Medical staff wearing full protective gear talk about a patient in the COVID-19 ward at the Hospital Juarez, in Mexico City. AP Photo

Much discussion on Covid-19 focuses on routes and rates of transmission of infection, case fatality ratios and positivity rates, where the emphasis is on parsing out Covid-19 related mortality from the general mortality figures on cause of death.

Yet mortality caused by Covid-19 interacts with other conditions.

The question I want to ask is whether the coronavirus attacked healthcare systems that were otherwise well-functioning or, if the adverse consequences such as unacceptably high rates of serious complications and mortality might be equally attributed to malfunctioning of medical infrastructure and healthcare under more normal circumstances.

Focusing on recent research on how the healthcare system works for the urban poor at least in the northern states, here are the main features. Poor people living in cities have three choices: They can either visit public primary care clinics, government hospitals or private providers in their vicinity.

Every choice comes with its own problems. The care in public primary clinics is often cursory with doctors asking one question, spending two minutes with the patient and moving on. Care in government hospitals is better, but requires long waits and interactions with patients that are snappy and short.

Not surprisingly, many patients from low-income neighborhoods tend to first access private providers in their own areas before turning to the government-run facilities.

There is a proliferation of such providers — some with degrees in bio-medicine and others with AYUSH in Ayurveda, Siddhi, homeopathy or Unani. And although there is clear variation in how patients are treated, many interactions with providers, regardless of the qualifications they possess, follow the same modes of diagnosis and treatment.

On a first encounter, patients presenting with symptoms are dispensed a packet of medicines for one or two days and told to report back if symptoms do not improve. The medicines (nuksa in local parlance) typically include an antibiotic, an analgesic, a vitamin tablet and sometimes a low dose steroid. The whole interaction lasts an average of five minutes.

Very often, if the disease is self-limiting such as a viral infection, the patient gets better regardless of the medicines dispensed.

However, serious diseases such as TB go undiagnosed till the condition of the patient worsens when he or she might be referred to a government facility or may choose to go to a different kind of provider.

Even in the case of emergencies such as an angina or heart attack, the symptoms might be first treated as those of gas.

Diagnostic delays, unnecessary injections and inappropriate use of antibiotics is a routine feature of medical treatment for residents of low income localities, regardless of whether they first present to a provider trained in biomedicine or in any other stream of medicine.

The challenges of diagnosis and treatment in the case of Covid-19 have not happened on a blank slate — the medical infrastructure for the poor was already heavily flawed.

It is not a surprise that in routine surveys about their experiences of the medical system, many patients express great skepticism on whether they have been diagnosed or treated correctly.

We repeatedly find that patients worry whether doctors are prescribing diagnostic tests because these are needed, or because the doctors get a cut from the laboratories. In the case of hospital admissions patients will often speculate that they were kept extra days because of the fee that could be extracted.

Needless to say, these feelings of mistrust seep into the way providers treat patients as they (the providers) are extremely wary of being accused of corruption and how their reputation might affect their business.

A provider faced with a complicated case that legitimately requires further, possibly expensive, investigations often has no choice but to slowly — over the course of many visits — convince the patient that they are not trying to extract money; the care is genuinely required.

In this scenario of generalised mistrust in medical institutions, how are families navigating symptoms of Covid-19 and of other diseases? Take just one example: Kusum (name changed) was in the eighth month of her pregnancy when the lockdown happened.

She had been diligently presenting for regular check-ups in the government dispensary and since it seemed an uncomplicated pregnancy her family planned for a home birth with a trained dai in attendance.

The area she lived in was declared as a red zone because of Covid-19 cases in an adjoining street and she could not get the necessary papers that would have allowed her to leave the cordoned area to access the dispensary.

Two weeks before her anticipated date of delivery Kusum began to feel that the foetus was not moving. Her husband tried to get her admitted to a government hospital but lacking the necessary paperwork, the hospital would not admit her.

Desperate, the family took her to a small private nursing home where a caesarean was successfully performed. The nursing home, as per their policy, tested Kusum for Covid-19 and reported a positive result.

The medical staff wanted to shift her to the ICU but Kusum claimed she had no symptoms and suspected that she was being falsely diagnosed as infected because the nursing home wanted to extract money. In this and many other cases, it is hard to determine from the outside whose claims were correct.

After all, non-symptomatic persons could be infected; defective tests could result in false positives; the nursing home could be faking the results to extract money as costs of treating patients with Covid-19 are sky high.

In fact, there are several PILs filed in courts asking for directions to be given to state governments to regulate pricing for diagnostic tests and treatment of Covid-19 cases in private medical facilities.

The point of this example, and many others that are surfacing, is that the coronavirus has brought out a major pathology in our health system. Even in normal circumstances healthcare for the poor, whether in the government-run facilities, or in the private sector, is dismal and the mistrust between doctors and patients is becoming corrosive.

The uncertainties produced by the Covid-19 pandemic have simply brought to light the pathologies of healthcare that the poor have simply learned to live with or die from.

As one person I know said, “Covid-19? We thought first that it was a disease of the rich — now we know it has come to stay with us as happened with dengue, and with chikungunya, and as will go on happening with every new and old disease.”