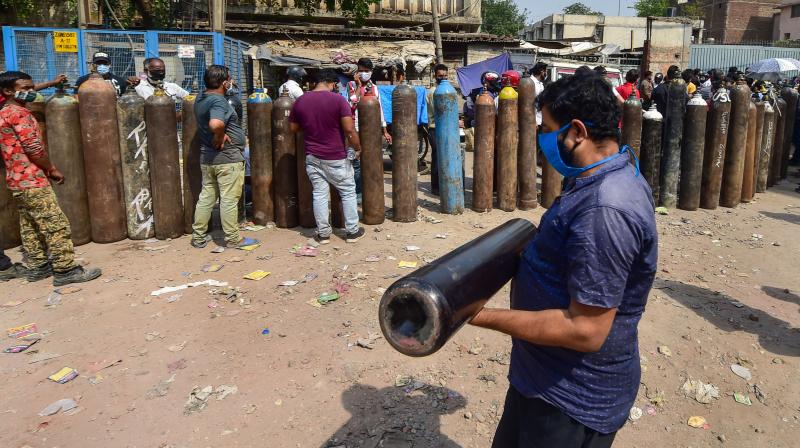 Family members of COVID-19 patients wait outside an oxygen-filling centre to refill their empty cylinders, as demand for the gas rises due to spike in coronavirus cases, at Naraina, in New Delhi, Tuesday, April 27, 2021. (PTI/Manvender Vashist)

When the newspapers recorded that over 20 Covid-19 patients had died in a leading New Delhi hospital for lack of oxygen, they also reported that India’s richest man, Mukesh Ambani, had paid £57 million (Rs 592 crores) for the Stoke Park estate in England. Another tycoon, Adar Poonawalla, CEO of Serum Institute of India, had rented a mansion in London’s Mayfair for £50,000 a week.

India has always been a land of cruel contrasts. But seldom has the self-seeking cynicism of its ruling class been so grotesquely flaunted. Humanity cannot avert what lawyers call “acts of God”, but the devastating second wave might not have struck so ferociously had it not been for the government’s triumphalism.

“With made-in-India solutions, we controlled the spread of the virus and improved our health infrastructure”, Prime Minister Narendra Modi had boasted. “Our vaccine research and production capacity have given a shield not just to India but to many other countries in the world.” The complacency and vanity ignored India’s decrepit medical infrastructure.

Monday’s official figures of 16,960,172 infections and 192,311 deaths may be a gross understatement. Even without deliberate fudging, there are few means of accurate assessment in India’s remote villages, for whose innocent inhabitants all illnesses are just “bemaari”, or fever.

Reflecting official Indian priorities, the system virtually ignores both the countryside, where 70 per cent of 1.3 billion Indians live, and the poor who numbered 364 million (28 per cent of the population) in 2019, according to the United Nations. As studies elsewhere have shown, hypertension, diabetes, respiratory disorders and nutritional deficiency are the highest in lower income groups.

Wallowing in India’s cricket victory over England may have been counter-productive. Cricket crowds, religious jamborees like the Kumbh Mela, packed cinema halls and the BJP’s resolve to extend its control through elections in five states/UTs contributed to today’s crisis. The Covid-19 protocols were completely abandoned and the virus was able to mutate into new vaccine-resistant forms. West Bengal’s tenfold rise in infections is being squarely blamed on political rallies.

The BJP’s smug pundits should rue the February day when, swept away on the tide of servile sycophancy that is the hallmark of our political culture, they hailed Prime Minister Modi as a visionary who had “defeated” Covid-19. This has become routine adulation. Even in 2018 the party’s national executive had passed a resolution applauding his his “visionary and disruptive leadership” (echoing Joseph Schumpeter’s theory of “creative destruction”) and claiming that his “new confident India” would reach “new heights in each and every field” by 2022. Another eight months to go before that Elysium dawns!

Meanwhile, pictures of the dead and dying, of coronavirus patients gasping for breath on pavements outside hospitals and of cremation fires smouldering night and day have gone viral on the world’s television screens.

“I weep for your nation” -- messaged Doug Jackson, a journalist from the North of England with whom I had worked 63 years ago and who is now an authority on Tiffany glass, the author of Mosaic: The Story of Joseph Briggs, the English ‘Tiffany’.

“It sounds ghastly”, commented Colin Smith, the author of England’s Last War Against France and Singapore Burning, and once star writer for London’s Observer newspaper. In that capacity he had trekked to Dhaka from what was then Calcutta during the 1971 Bangladesh war, encountering hordes of fleeing East Bengal refugees who thought him mad for walking in the opposite direction. “Wish London would at least make a gesture and send a squadron of RAF transports heavy with oxygen” Colin Smith added.

British Prime Minister Boris Johnson has responded since. But tiny Singapore made the unpublicised first gesture with four cryogenic oxygen containers. “We stand with India in its fight against Covid-19”, said Singapore’s high commission in New Delhi. But whatever Britain --or for that matter any other country -- does, the answer lies in Indian hands. Neither another Marshall Plan or PL-480 wheat (or its equivalent) can resolve India’s trauma now. India alone can save its own future through more responsible and caring governance.

As the virus shifts to smaller towns and villages or moves down the age scale in a land where 65 per cent of the population is under 35, as vast swathes of people are felled because only 1.3 per cent of the population has been fully vaccinated, the BJP’s religion-obsessed caste-ridden bigots must face up to the stark facts. Death and disease do not spare the rich because they are Hindu. Nor is there a quick fix to compensate for the neglect of decades. The situation might well deteriorate before it improves.

Everything in India now is geared for the rich. Their private jets may fly the Ambanis and the Poonawallas to Geneva or New York for a toothache, but the system by and large gives reasonably good service to the next rank of the wealthy and the politically influential. It neglects all the others.

Mandatory online registration for vaccinations is the latest instance of discrimination since it at once creates difficulties for large numbers of the underprivileged. The differential pricing for vaccines, with no cap, to which West Bengal chief minister Mamata Banerjee rightly objects, is equally objectionable for potentially facilitating profiteering. In fact, in reviewing the system, the government cannot overlook the choice between hospitals that exist only to make a profit for the owner and institutions whose main purpose is to serve the public.

Private hospitals, including many old established nursing homes, have the resources and quality. But being now in the hands of businessmen with no vision, many have deteriorated into money-making operations. Government hospitals, on the other hand, are often ill-equipped with poorly trained staff, no public accountability and subject to bureaucratic and political controls.

Choosing between the devil and the deep blue sea cannot be easy. But the vast majority of Indians will remain bereft of adequate medical care without a caring version of John Kenneth Galbraith’s “post office socialism”.