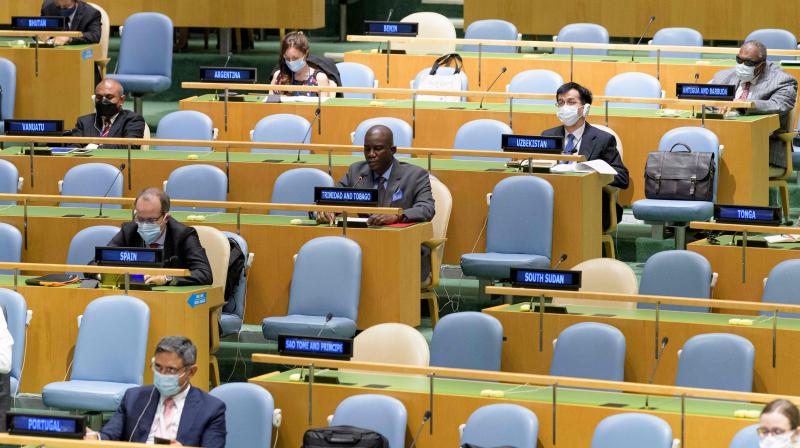 Covid-19’s shadow looms over the 75th anniversary of the United Nations General Assembly this year. The high-level segment began September 22, with virtual speeches delivered to a near empty hall. Customarily, the first speaker was Brazilian President Jair Bolsonaro, followed by US President Donald Trump. The US presidential election is just weeks away, the outcome of which is critical for America and indeed the world.

For India, the anniversary has little cause for celebration as China, a UN Security Council permanent member, ignoring its Charter commitments, is attempting by force to alter the status quo at the Line of Actual Control in Ladakh. The 2020 theme is: “The Future We Want, the UN We Need: Reaffirming our Collective Commitment to Multilateralism”. This sounds unrealistic, the world being caught between the pandemic and the rise of nationalist-populist leaders in almost all major powers, other than perhaps Germany. It’s therefore important to study what they had to say.

President Trump, days from a tough November 3 election, was naturally more geared to a domestic than global audience. Incidentally, he spoke as Bob Woodward’s book Rage, based on extensive interviews including with the President, reached bookshops. Pulling no punches, Trump called the pandemic the “invisible enemy” and “China virus”. He likened US mobilisation to that during World War II, having already cost over 200,000 dead, 40 million jobless and an economic slowdown nearing recession. The $2.2 trillion stimulus may leave behind rolling deficits. Trump sought accountability from those who “unleashed the plague”. While China, he alleged, locked down domestic travel, it kept international flights open, and delayed sharing sharing that the disease was communicable person-to-person and by asymptomatic individuals. Woodward recounts Trump’s discussion with advisers whether China, realising the likely damage to its economy, allowed international travel and thus the pandemic’s spread, to level the playing field with the developed world. Trump then fielded the usual claims about US economic and military growth under his watch and a swipe at the UN that it must focus on “real problems” to be effective. The US, he claimed, led in protecting human rights, which sits poorly with his handling of the Black Lives Matter protests. When Woodward pushed with: “I’m asking whether you can understand the plight, struggle, pain of people?”. The reply, more dodge than revelation, was: “I’m somebody that likes to get things done rather than talk.” Trump cited his “America First” invocation, encouraging others to the same. It summed up his anti-multilateralism at the citadel of global governance.

Chinese President Xi Jinping was happy to fill that gap. He repeatedly referred to the pandemic, on the defensive after the US onslaught. He pledged the virus must be defeated, but must not be politicised, nor nations stigmatised. He sought “macro policy coordination” between major economies to enable global recovery. He then waxed eloquent about helping the developing world, especially Africa, which for China is a crucial market and source of raw materials. Chinese companies control mines from Congo to Chile and Australia, cornering minerals needed for solar panels, electric vehicles, etc. The pandemic, Xi argued, should teach there is no escaping inter-dependence and respect for each country’s “independent choice of development path and model”. He countered the crescendo for “decoupling” from China by seeking an open multilateral trading system with WTO as its cornerstone. On climate change, he promised carbon neutrality in China by 2060. Of course, he ignored that China’s installed capacity for polluting thermal power is half the world’s total. Even new Belt and Road Initiative projects have a mix of thermal and hydro power units. Reaffirming faith in global governance, he promised China will never seek hegemony. The speech will leave most of China’s neighbours astounded at the gap between his words and China’s actions.

Interestingly Russian President Vladimir Putin contested America’s claim of stabilising West Asia and the Gulf by “peace deals”. He said as the world changes so must the UN, but undermining it may collapse the “architecture of international organisations”. In the Mideast, he sees foreign interference, not democracy and reform, with the vacuum filled by extremists, leading to an illicit trade in arms and oil. He undercut Trump’s simplistic conclusion that splitting and realigning parts of the Islamic world with Israel and against Iran and its Shia nation-allies would buy peace.

Amid this dissonance among major powers Pakistan’s PM Imran Khan addressed the UNGA. He tried linking the UN’s 75th anniversary as a time to recall fascism’s defeat in Europe and focus on contemporary neo-fascism by the RSS and the BJP government in India. From that it was an easy path to claiming repression in Kashmir, and the breach of real and imaginary past UNSC resolutions. While he focused on the flow of illicit funds of Pakistan’s politicians to developed nations, with his political rivals in mind, there was no mention of Pakistan’s funding non-state actors and its travails with the Financial Action Task Force. His angst is understandable as the big powers aren’t interested in Pakistan’s Kashmir laments, except China.

Prime Minister Narendra Modi may take the high road and leave Indian diplomats to respond. He will no doubt seek UNSC reform, support equitable globalisation, as India needs investment to create employment, reiterate India’s commitment to the Paris climate change accord and, like China, offer help to developing nations in fighting the pandemic. The post-pandemic world has conflated with the post-Trump world. Woodward’s final words on Trump are that his oversized personality and lack of trust in experts led to “the undermining or attempted undermining of so many American institutions. The failure of calming, healing voice. The unwillingness to acknowledge errors...”. Facing a recalcitrant China, angry farmers up in arms and a swirling Covid, India’s government should draw a lesson from this.