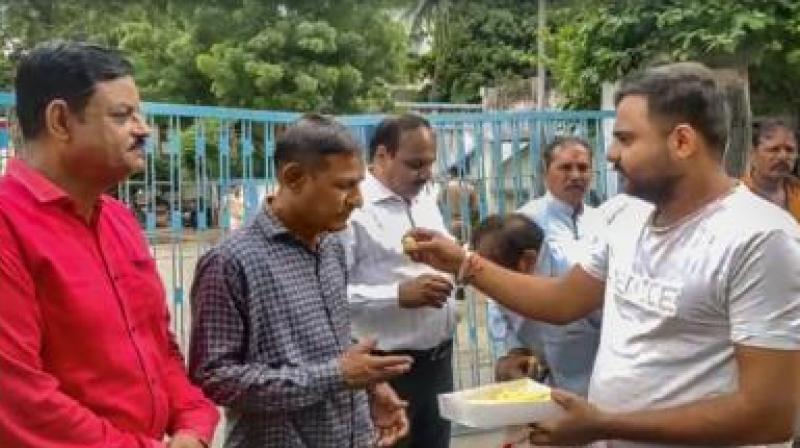 A man offers sweets to people convicted for rape and murder in the Bilkis Bano case of the 2002 post-Godhra riots, after they came out of the Godhra sub-jail after the Gujarat government allowed their release under its remission policy, in Godhra on August 15. (Photo: PTI)

The Supreme Court has issued a notice on a petition challenging the recent decision of the Gujarat government to remit the sentences of 11 rape and murder convicts. It has thrown into sharp relief certain important legal questions. What does life imprisonment mean? Is the power to remit sentences unfettered? Was the law followed in Bilkis Bano’s case by the remission board? Finally, how about the different standards followed by different state governments in the application of remission policies?

Remission under the Criminal Procedure Code: However, this grant of remission is not unfettered. The convict may request remission from the President or the governor under Articles 72 and 161 of the Constitution. This remission may also be granted under sections 432 of the Criminal Procedure Code. Under this framework, the appropriate government can commute, remit, or suspend sentences of a convicted person.

Bilkis Bano’s case: Even before delving into the many legal infirmities apparent in the remissions granted in the Bilkis Bano case there is an important question that must be asked, is it morally appropriate to remit a rape sentence? Rape and murder are heinous crimes; this brooks no disagreement. There has been an understanding in our society, particularly after the Nirbhaya case, that rape must be dealt with by a strong hand. Even the Centre’s recent remission policy for release of prisoners on Independence Day excluded rape convicts from its purview.

Why the remission in Bilkis Bano is incorrect: From a purely legal standpoint, the remissions stand on tenuous ground. First, there is the issue of consultation with the Central government before granting remission as the investigation was carried out by the CBI. It is unclear whether the state government carried out this consultation. If not, then the remission suffers from an apparent illegality as it runs counter to Section 435 of the CrPC. This consultation is important because cases investigated by the CBI cannot be left to the fancies of the Jail Advisory Committees on remission.

It holds to reason that if a trial is transferred from State A to State B because there were apprehensions of bias in State A, should this logic not extend to the grant of remission as well? Would it be appropriate if the government accused of bias during the trial were given the power of remission post trial?

Third, Section 432 requires that the opinion of the judge who convicted the accused be taken into consideration before granting remission. Indeed, the Supreme Court has held that the government's decision on remission should be guided by the opinion of the presiding officer. There is nothing on record to suggest the advisory board in Gujarat did this. The CBI judge who convicted the accused has come out and criticised the grant of remission.

Arbitrariness in the application of remission: The judicial system today is confronted with a spectre where some prisoners are languishing in jail interminably and yet others — who raped women and murdered children — are out. A case in point is of certain Sikh prisoners who continue to be in jail for more than 25 years. This despite consistent demands to release them on compassionate grounds. A country governed by the rule of law must — at a minimum — have some semblance of uniformity in its application of the law. The disparate ways in which remission policies are applied in different states is arbitrary and contrary to Article 14 of the Constitution. Remission policies should not be left to the vagaries of Jail Advisory Committees on remission.

Dissents in death penalty cases:  There is another related but important issue that needs to be considered — dissents in death penalty cases. Should a person be put to death if the very people deciding on the question disagree fundamentally? The death penalty is the epitome of the state’s coercive power and it happens to be irreversible. Should the order decreeing the use of this power not be unanimous? What if the other, equally competent judge, turns out to be correct? Indeed, in his dissent in Glossip v. Gross, Justice Breyer of the United States Supreme Court noted that those sentenced to death are 130 times more likely to be exonerated than those convicted of non-capital offences.

In Bachan Singh's case, the Supreme Court emphasised the need for scrupulous care in deciding death penalty cases. This argument could very well extend to imply that death penalty can be imposed only when there is not a shred of doubt regarding the quantum of sentence imposed. This issue came out starkly in Devinder Pal Singh Bhullar's case in which the seniormost judge in the three-judge bench, Justice M.B. Shah, had found Bhullar innocent and acquitted of any guilt.

At the cutting edge level, it is apparent that our criminal justice system seems to be shot through with wide discretion that is bound to lead to situations where some are let out of jail while others continue to serve without any possibility of parole or remission.